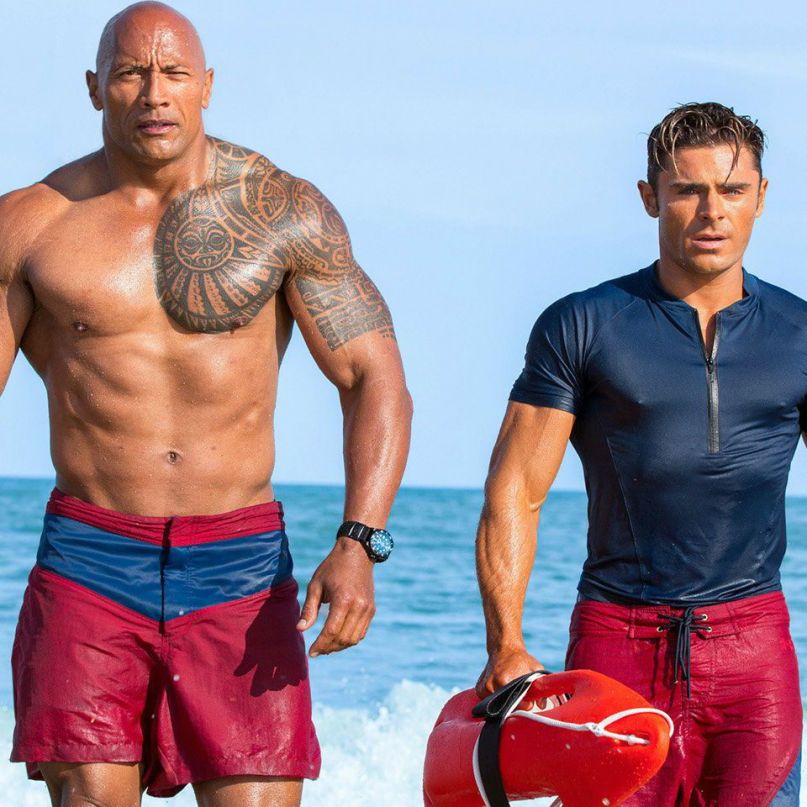 After 2012’s 21 Jump Street proved that the formula of “take a cheesy, decades-old TV show and adapt it into a self-aware action comedy” can bear brilliant fruit, studios have been trying – and failing – to replicate its success. (See: CHiPs. Well, don’t see CHiPs.) Baywatch is the latest attempt to slather a layer of comedy lotion on the leathery, sun-baked body of the television of our youth, and the results are just about as flaky and chapped as you’d expect.

In this modern-day retelling, Mitch Buchannon (Dwayne Johnson) leads Baywatch, a so-called elite squad of lifeguards patrolling Miami Bay and solving crimes, much to the chagrin of real cop Ellerbee (Yahya Abdul-Mateen II). However, with the arrival of Matt Brody (Zac Efron), a cocky former Olympic gold medalist – and irresponsible party boy – Buchannon must whip him into shape while thwarting the maniacal (and extremely vague) plans of villainess Victoria Leeds (Priyanka Chopra).

When it comes down to it, Baywatch’s central sin is that it’s just…not funny. Johnson and Efron are frustratingly perfect as the leads, Johnson acutely channeling his real-life persona as America’s Coach into a big, bold character whose gung-ho bluster doesn’t translate well outside the sunny utopia he’s built for himself on the Bay. Efron, meanwhile, works wonderfully as the straight man to Johnson’s bug-eyed alpha male, particularly his reasonable skepticism at how seriously everyone at Baywatch takes their jobs.

Unfortunately, there’s not much left to praise besides Johnson and Efron’s easy, affable chemistry; even their big personalities (and even bigger biceps) can’t hold up two hours of mediocre, unfunny dreck that plays to the cheapest seats. Unlike the complicated, novel twists on its source material that 21 Jump Street dabbled in, the only hot take writers Damien Shannon and Mark Swift can think of is to have the characters constantly circle around the same conversation about why a group of lifeguards are acting like police detectives. Of course, there are also gags about sexy lifeguards running on the beach in slow motion, and the brief, inconsequential cameos from David Hasselhoff and Pamela Anderson (thanks for the spoilers, opening credits). That about covers it in terms of the film’s interest in deconstructing – or even referencing – the old show.

When it’s not beating those jokes to death, the team of Shannon, Swift and director Seth Gordon (Identity Thief, Horrible Bosses) lean hard on the sort of gay panic humor and tired dick jokes that audiences barely tolerated in the ‘90s. Even the film’s biggest laughs come from Johnson and Efron charming their way through extended riffs on erect penises trapped in beach chairs, or forcing Efron to lift a dead body’s scrotum to examine it. Baywatch works hard to earn its R rating, but this kind of tame raunch won’t amuse anybody who’s seen a comedy in the last twenty years. If a scene featuring a cross-dressing Zac Efron in an industrial kitchen gives you flashbacks to Good Burger, it’s not a great sign.

Besides Mitch and Brody’s oversized bro antics, the movie’s only other dedicated source of humor is Jon Bass’ Ronnie, the average-looking, slightly overweight guy on the team. In true ‘80s-comedy fashion, Ronnie’s sole purpose in the film is to remind everyone of how funny it is when fat nerds fall down or make mistakes. Between Bass’ desperate, hammy performance and the cruel laughs at his expense, the filmmakers somehow land on a cliché even more dated than the show they’ve adapted. In a more generous reading, you can claim he’s there to throw a lampshade on the beach-body aesthetics of the rest of the film. (On watching everyone eat chocolate shakes and fries while he crunches on a salad during a meeting: “I thought you had to have, like, a really restricted diet to look like you guys do”). The rest of the time, he flops around and mugs while being tased.

The female characters fare worse: CJ (Kelly Rohrbach), the breakout character of the original show, is pushed to the sidelines as the object of Ronnie’s drooling affection. Instead, the female lead is fellow Baywatcher Summer (Alexandra Daddario, last seen playing The Rock’s daughter in San Andreas), who’s firmly relegated to third-wheel status in Mitch and Brody’s investigations. There’s a sixth member of the team, Stephanie (Ilfenesh Hadera), but she gets so little to do that you might not realize until halfway through or longer that she’s supposed to be Johnson’s love interest. Together, along with Chopra’s straightforward and inelegant baddie, the ladies don’t get a lot to do apart from leaving their bathing suits half-zipped and running in slow-motion. It’s perhaps in this respect that Baywatch is the most faithful to its origins.

Treading water with its wasted leads, dated humor, and paper-thin spin on a show that few remember fondly, there’s not much under the surface of Baywatch. Try as they might to float by on beach bodies and two of the world’s beefiest movie stars, there’s nothing to anchor the film in a novel perspective. It might tide you over until the next blockbuster comedy, but if you’re fishing for something better, just sail on past Baywatch. Sea puns.