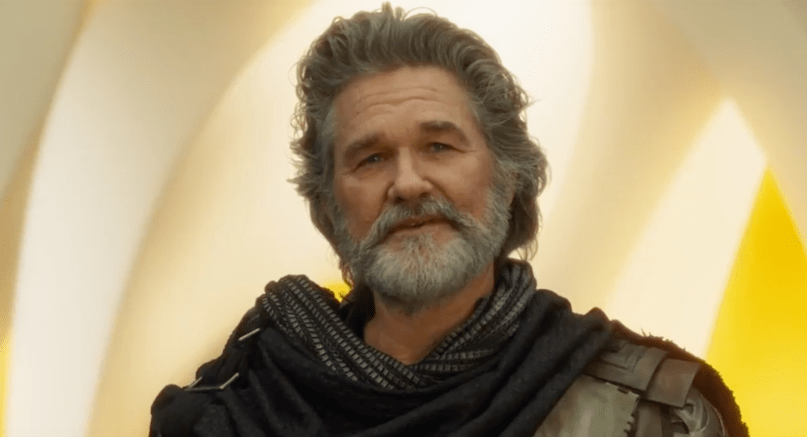 It’s easy to take a movie like 2014’s Guardians of the Galaxy at face value in an era when the superhero genre has turned tentpole movies into individual billion-dollar industries. Longtime dominions of geek culture have become mainstream sensibilities, and so a movie heavily based around a sentient tree and a talking raccoon battling space evil was very nearly the highest-grossing film of its year. But in prior decades, even in a post-Star Wars world, something so gleefully niche as a summer blockbuster about a group of offbeat space thieves would’ve been a far tougher sell. But that was the joy of James Gunn’s unseemly mega-hit: it certainly got a bump from the MCU becoming what it has, but it was an enjoyably unusual take on the hero-fueled action epic in its own right.

By now, the talking point of Gunn as a Troma veteran is well-trod territory, but that outsider sensibility went a long way in setting Guardians apart from its flood of contemporaries. And it goes an even longer way in Guardians of the Galaxy Vol. 2, a film that manages to shoulder an excessive volume of storytelling (even by Marvel standards) without collapsing under the weight. For the first time since Captain America: The Winter Soldier, Vol. 2 feels like a standalone Marvel film, independent of its middle-chapter obligations. This isn’t to say that those larger ties aren’t present, but that Gunn’s screenplay and direction make them appear more naturally integrated, when other films have opted for the shoehorn instead. (Hey there, Age of Ultron.)

Given how much is going on at any given time in Vol. 2, it’s a mercy that little time is wasted getting back into the swing of things. After a prologue fills in a bit of key backstory and continues Disney’s ongoing quest to perfect de-aging CG, it’s time to throw right back in with the Guardians, who’ve been tasked by The Sovereign (a species of genetically modified and “perfect” golden people) with disposing of a hideous blob of tentacles and teeth. In the film’s first daring stylistic approach, Gunn reintroduces Star-Lord (Chris Pratt) and Gamora (Zoe Saldana) and Rocket (Bradley Cooper) and Drax (Dave Bautista) in the background; Baby Groot (Vin Diesel, his voice modified for maximum preciousness) dances around to ELO’s “Mr. Blue Sky” as the focal point while the Guardians do another alien race’s dirty work.

(Comics to Screen: A Guide to Guardians of the Galaxy Vol. 2)

But after Rocket makes the characteristically shady decision to steal rare, high-powered batteries from The Sovereign, the Guardians end up in their natural state of “on the run” once again. But a crash-landing sends them on separate paths, after they’re rescued from a Sovereign attack by Ego (Kurt Russell), an omnipotent being who’s also probably Star-Lord’s dad. Star-Lord, Gamora, and Drax return to Ego’s planet (named Ego’s Planet), where only Ego and his right-hand Mantis (Pom Klementieff) reside. Mantis is an empath, hyper-attuned to the feelings of others, and she helps Ego rest. It’s the only thing that works for him. Rocket and Groot, meanwhile, are tasked with fixing the ship and guarding Nebula (Karen Gillan), Gamora’s still-vengeful sister.

Too much? Well, there’s plenty more. We’ve yet to touch upon the continued adventures of Yondu (Michael Rooker), who’s been ex-communicated from the Ravagers for his intergalactic child trafficking. Or Star-Lord and Gamora’s will-they-won’t-they tension. Or the number of beings who want a piece of the Guardians for one reason or another. And yet, somehow, Vol. 2 manages the substantial feat of tying together its many disparate threads into one of Marvel’s more emotionally developed movies to date. For such a packed tale, Gunn manages to one-up the character work that made the first Guardians so appealing, adding to each character in ways both familiar and welcome. If the previous movie was about bringing the group together, Vol. 2 poses a handful of great comic and dramatic questions about what it might take to keep such a crew intact.

Vol. 2 leans heavily into the rapport of its cast, and the leading team settles back into its roles with charm. Saldana manages an effortless cool in what’s a more restrictive role on paper, but her and Gillan’s increasingly heated battles achieve an impressive dramatic resonance. The film is obsessed with families of all kinds, and the idea of Nebula as an enraged, disappointed second child is given time to grow even richer than it did the first time around, with both actresses ably conveying the sense of hurt underneath the heavy but near-comical violence between them. Bautista is a comic highlight once again as Drax, his literalisms offset nicely by Klementieff’s doe-eyed approach to the same. (It’s a slight letdown when some of their exchanges see Gunn’s screenplay turn a shade more mean-spirited in a way that barely fits the film, but this is also a movie about superheroes who call each other dicks on a frequent basis, so it’s a mild distraction at worst.)

Surprisingly, one of the greater beneficiaries of Vol. 2’s broad scope is Rooker, who’s been one of filmmaking’s better-kept secrets for some time and has returned to prominence thanks to Guardians and The Walking Dead. Quite a bit of Vol. 2 is allowed for fleshing out Yondu, who at once ruined Peter Quill’s life when he was a kid and probably saved him from some of space’s greater dangers. Gunn goes out of his way to make Rooker look like the coolest man on Earth throughout the film, and the veteran actor answers the call ably, especially given how much time he and Rocket spend building off each other. (Cooper’s once again strong in the voice role, cracking with emotion even as he’s rattling off one-liners.) The scenes between the two lend credence to Vol. 2’s repeated invocations of “family” in all of its forms, specifically the idea that a family can just be two people who have nothing in common but see a lot of themselves in one another.

To that point, Pratt is given the curious task of playing a straighter man for much of Vol. 2, but the heart of all the stories is Star-Lord’s slow embrace of Ego as the lost father figure, whose absence served as the driving force behind everything Peter Quill is as a person. Pratt is once again gruffly endearing (Gunn understands how to use the actor’s boyishness without it turning grating in the Jurassic World way), but Russell is so perfectly cast that it’s hard to imagine anyone else in the role. Having always walked a thin line between action-star credibility and seen-it-all swagger, Russell’s star persona is used in ways that his winking meta-turn in Furious 7 only hinted toward. Ego might be more than a little bit of a blowhard, but hey, he’s a god. (“Small g,” he insists early on.) He’s a hellraiser in an old sense; the only question is how old.

In a sense, all the expected sequel hallmarks are present. The chaotic action returns, albeit a bit cleaner (even at its most anarchic) this time around. The references to the previous film and other corners of the Marvel universe are aplenty. End-credit references are made to other stories that could eventually be told, and to other familiar faces. The story moves ahead while also stopping short of stepping on another film’s territory, and the soundtrack is once again full of ironic classics. But Vol. 2 manages to dig a little deeper toward the series’ nostalgic heart, Gunn tapping into what exactly made the first film’s ironic pastiche of classic rock hits and cacophonous modern action such a rousing success.

It’s not just that Sweet and Fleetwood Mac and Sam Cooke are used in a Marvel movie, it’s the way in which they make the innocent connection to Earth’s relatively blissful simplicity in the middle of a big, dangerous galaxy. (If anything, that wistful recall hits harder today than it did three years ago.) Looking Glass’ “Brandy (You’re a Fine Girl)” is invoked several times throughout Vol. 2, and even when Russell does his best Christopher Walken while dramatically enunciating it, Elliott Lurie’s declaration that “My love, my lover, my lady/Is the sea” eventually becomes a touching riff on where a drifting soul can ever belong in the expanse of space. Vol. 2 understands well that the action is memorable because of who it’s happening to and around, and for as much colorful destruction as the movie offers, Gunn never loses that sense of character.

While the body count is outrageously high for what’s more or less a family movie (a scene involving Yondu’s whistling dart makes for some great slow-motion shots and a disconcerting level of brutality for a movie like this one), Vol. 2 keeps the “another day at the office” tone of its predecessor’s set pieces to great effect. Whether it’s running from a fleet of arcade-style bombers or escaping a crumbling planet, the movie admirably distinguishes each of its action sequences, until they eventually come together into a grand finale that would be overwhelming if the movie hadn’t built to those moments so effectively. In a time where explosive, grandiose action is its own cliché, a band of heroes who share that opinion might be the perfect protagonists.

Credit belongs not only to Gunn’s screenplay, which is frequently hysterical outside of a few clunkers and a bit of indulgence in over-expository monologues, but to his assured direction. The film’s neon-drenched visuals achieve an almost painterly quality at times, particularly in some of the gorgeous wide-angle shots throughout. Vol. 2 makes the case for post-production augmentation as its own kind of art form in the same way as Mad Max: Fury Road at its best, its oversaturated palette and stylized photography capturing the surrealism of its settings in breathtaking fashion. Whether in the Sovereign’s gold-clad stronghold or the lustrous splashes of red and green across Ego’s Planet, bold color is central to virtually every frame of Vol. 2. While the 3D is fairly good, a screen that allows you to take in the film’s splashy bursts of unbelievable color is highly recommended.

Very little separates “fan satisfaction” from “fan service,” and while Guardians of the Galaxy Vol. 2 certainly engages in both, it’s a wholly entertaining piece on its own. It’s the rare Marvel sequel that manages to expand on what came before in new and rewarding ways, while also striking its own distinct tone even as some of its narrative devices skew familiar. And if you haven’t figured it out by this point in the review, Vol. 2 remembers one of the simplest imperatives of any summer movie: it’s a hell of a fun time. The Guardians will trudge on, and eventually they’ll fight in the Infinity War with everyone else, and many people will make untold piles of money from all things Baby Groot. But Vol. 2 is a summer blockbuster made by and for the weird kids, with love and companionship in its heart. In so many words, it’s everything that Marvel (and its fans) needed right about now.