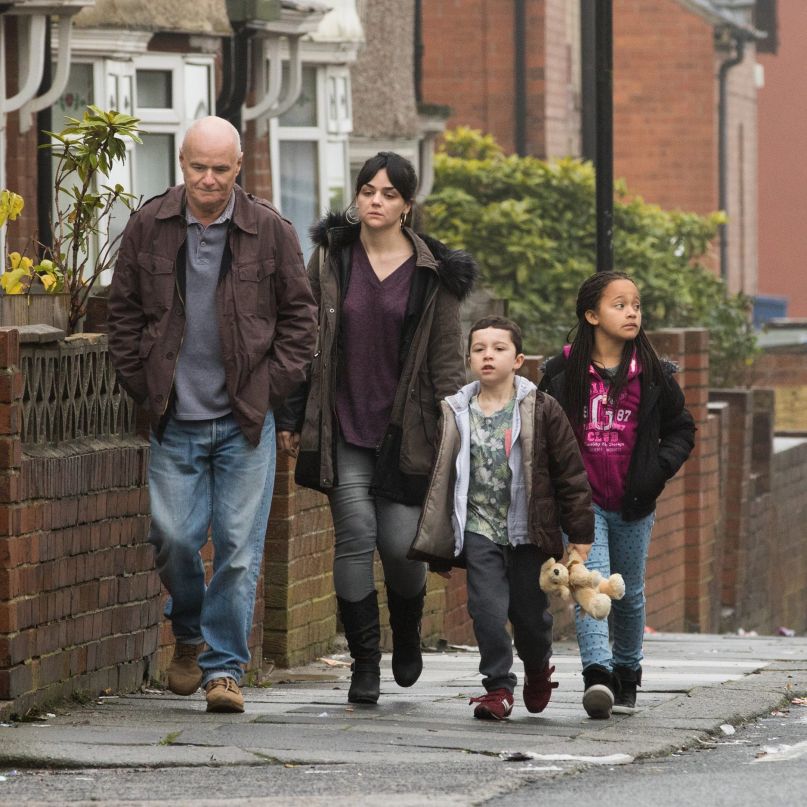 Have you ever seen an older person left flummoxed by modern technology? A parent or grandparent, fidgeting while staring at a monitor, perhaps trying to fill out a form or make a purchase online. They’re near the point of whipping a mouse at the screen. Seems kind of funny, right? Almost makes you feel superior, if you’re young enough. But here’s the deal: don’t be a tool.

Take a minute and help them. Don’t write them off as inept. Because as obvious as it might sound, it bears repeating: you will all get older. You’ll all be Daniel Blake (Dave Johns, a middle-aged comic in his feature film debut) at some point, just trying your damnedest to maintain your lifestyle. You might need help. You might get sick. You might be royally screwed by a rapidly accelerating and unsympathetic system. So give your older neighbor or your bumbling uncle a second. Give people like Daniel Blake a chance.

I, Daniel Blake is a wonderfully humane drama, and it’s by way of this humbling, sympathetic reciprocity that director Ken Loach and his central character flourish. Loach’s film is a plea for common courtesy, filled with an affectionately lived-in humanity. When health and wages and common courtesy are treated at arm’s length, a guy like Daniel Blake reminds us of our better selves. Blake does not quit. He doesn’t defer. And nor should you on this film or this man. This is a kitchen-sink hymn for the indomitable spirit of the common man.

Johns is the titular Blake. He’s a widowed, 59-year-old carpenter in northeast England who suffers a heart attack on the job. His doctors fear that Daniel will develop an irregular heartbeat, which could evolve into life-threatening arrhythmia. Loach stages moments in plain, understandable terms – Daniel, alone in the frame against cold, natural light, is practically confined to his phone like it’s his IV, and the frustration of trying to get through to a customer service rep is wholly relatable. It’s hard to judge him when he swears at the operator.

Blake’s cardiologist says he can’t work until he’s well. That’s a death sentence for a paycheck-to-paycheck guy like Blake. How can he afford to heal? Daniel applies for sickness benefits (or specifically, Employment and Support Allowance in the UK). But thanks to the mathematics of evaluating a human life, he’s deemed well enough to be denied aid, and ironically, fit enough to work. Red tape, bureaucratic mazes, and callow decision-making constantly stand in Daniel’s way. But the man has the fire in him to keep fighting. He just wants to live his ordinary life, and he can’t.

Daniel stumbles through online applications. Paperwork. Affectless government employees. And Johns’ surprisingly flappable demeanor makes for a supremely likable lead. Daniel’s only solace comes from befriending a younger mother, Katie (Hayley Squires), who’s in the same dire straits. I, Daniel Blake’s narrative is one of small, yet impossible, wishes. Katie just wants to feed her children, but can’t on welfare. Daniel’s neighbors, a pair of punky teens, just want some killer shoes while living in the same kind of poverty. And Daniel just wants to be treated with some human decency.

In Loach’s sensitive hands, the film’s tale of the working class citizen’s plight doesn’t feel exploitative. A more callous filmmaker would hone in on cheap sentiments or big speeches, whereas Loach shoots in calm, lengthy takes. His distance feels self-aware, as though taking care not to fake his characters’ feelings with an invasive approach. Yet Loach is unafraid to let a moment run its course, whether it’s Daniel asking people to go away because he feels unwell, or watching Katie’s temper rise as she’s shooed away by government employees. This is a film of impatient interactions and unseen places: waiting rooms, food banks, and the constant apathy of government workers toward Daniel and his neighbors.

And the victories are small, but so hard-fought and familiar that they feel almost too good to be true. Loach observes scenes of hunger. Scenes about the dread of pending medical results. Scenes revolving around empty bank accounts. The disappointment is felt when basic rights like health and happiness are so hard to come by. A small moment like Daniel spray-painting the outside of an aid center with his name, just looking for some acknowledgment, might be the feel-good moment of the year. And Daniel represents a sort of keep-on-keeping-on wiliness that’s galvanizing.

The film’s best quality is its honestly. As fly-on-the-wall character portraiture goes, Loach, his longtime writing partner Paul Laverty, and Dave Johns have created something perfect with the figure of Daniel Blake. Johns is the film’s backbone, its piss-and-vinegar spirit. It’s a rich and substantial role, without a shred of posturing or “actorly” inclination. He’s not too proud to ask for help, and he’s kind enough to try and reciprocate. He’s willing to give his spot in line for the single mother with two kids. He grouses at the muzak played while he’s put on hold. Dave Johns embodies a sort of universal annoyance, and he magically offsets it with crass charm, smiling in disbelief all the while. Tired, but determined to figure out the next step.

Loach, a historically dry but socially critical filmmaker, envelopes his main character in apathy, and I, Daniel Blake harangues against the faults of the system in a minor key. But the strokes are confident, and Loach’s style works wonders in sketching this kind of struggle. The director simply asks that the viewer be patient, without letting go of the problems in Daniel Blake’s hands. And Dave Johns is the perfect representative for that helplessness. It’s a struggle to aid, with the constant reminders that assistance may never come. But Loach and Johns have made a call for change and understanding that is empathetic, conscientious, and magnificently moving.