Guy Ritchie's update of the Arthurian tales makes a lot of noise, to disappointing returns 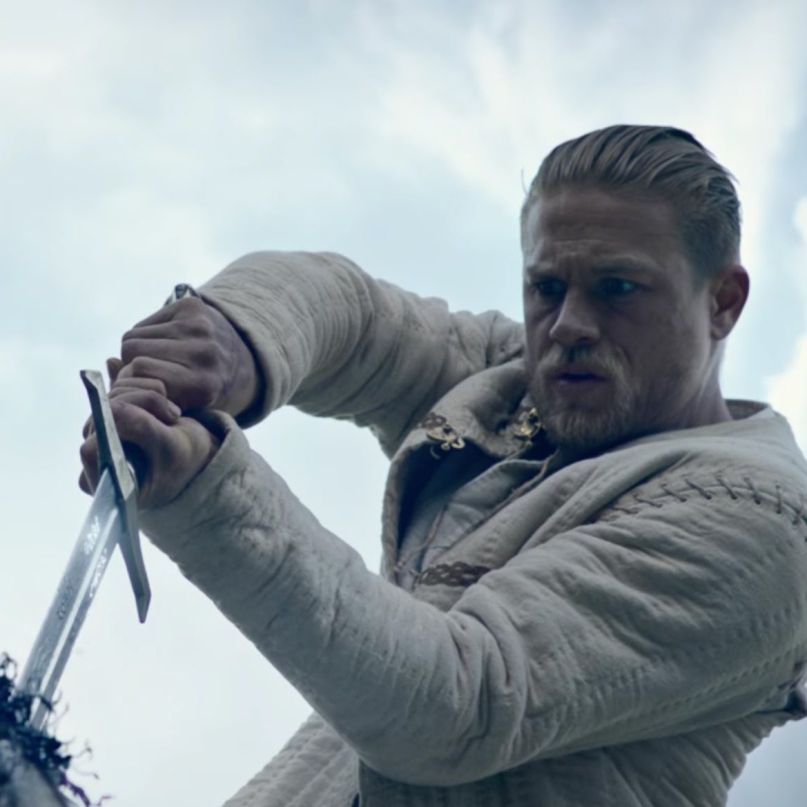 That the film holds together at all, built as it is of jarring exposition, music video-style montages, and action set-pieces that seem like teasers for something a lot better and more coherent, is due almost entirely to the two human charisma factories at its center. There’s Jude Law as Vortigern, a king and mage determined to hold power at all costs, even if it means paying a lake full of octopus-women with the blood of his loved ones. (That’s far from the silliest thing that happens in this movie, so tuck in.) There’s also Charlie Hunnam as Arthur, the so-called Born King who has to deal with the long-blocked trauma of his father’s (Eric Bana) murder before he can properly wield the sword. That sword also functions sort of like a bomb, or something.

When Vortigern’s ritual search for a man who can pull the sword from the stone reveals Arthur’s destiny, it sparks a war between a rebel faction (led by Djimon Hounsou, Aidan Gillen, and wonder of wonders, Astrid Bergès-Frisbey as a woman who the film doesn’t immediately murder for dramatic effect) and the King’s army. With the exception of a brief foray into a mystical land that is inhabited by literal Rodents of Unusual Size and some drama with Arthur’s longtime friends and staff, that’s about it for plot.

This brief review can’t thoroughly address some of the more basic failings of this quip-laden testosterone fest — for example, it’s never quite explained why on earth Vortigern would go looking for a man that his fearful subjects were sure to rally around, particularly when that man would be able to wield a magical sword bomb — because Legend of the Sword isn’t interested in logic. It’s also not interested in character, story, theme, or coherence of any kind, really. This is a movie with two goals: to amp you up, and to demonstrate that Hunnam is a goddamn movie star. In both, it succeeds, for better (in Hunnam’s case) and for worse (in nearly every other case).

Let’s get that second goal out of the way: despite being given almost nothing to do beyond smarm and screaming, Hunnam’s presence is endlessly watchable, if perhaps not arresting. One gets the sense that the screenplay (by Joby Harold, Ritchie and Lionel Wigram from a story by Harold and David Dobkin) wants Arthur to be seen as a charming cad who rises to the occasion. What it actually offers is a cad who is very good at fighting and at being a jackass, and any charm managed is due more to Hunnam’s performance than it is to the material. The brain might recognize this is a wholly underdeveloped character (though he’s still better served than every female character in the film combined), but some primal impulse keeps you watching, because we all instinctively know star power when we see it.

That’s a quality Hunnam shares with Law, an actor with chops more than up to the task of sneering, preening, and bellowing into severed ears (though he’s tops at all of the above). Law fares better in King Arthur than the majority of his cohorts, because his evil intentions are so clearly telegraphed as to be comically obvious. Law’s main task, then, is to be as entertaining a villain as possible, and it’s no surprise that the actor gets the job done. Whether weeping tears of dark magical material or chatting idly before an execution attempt against Arthur, Law’s effete, articulate baddie is a lot of fun.

It’s welcome, because the fun here is otherwise in short supply. That’s not to say there aren’t laughs, intentional and otherwise; Ritchie’s rapid-fire pace makes the occasional punchlines land all the harder. Unfortunately, the levity is scattered and tossed off between grand battles which all seem to take place in the uncanny valley, making it tough to appreciate what little color and spark there is. Most of that comes down to the aforementioned trailer problem: a solid 80% of Legend of the Sword is made of little more than quick flashes of promising action, dotted with the occasional slow-motion kill shot. Picture a two-hour film with the pacing of a modern action movie trailer, and you have a snapshot of how exhausting Ritchie’s film becomes. Add in a few ludicrously overplayed “wow” moments — a mask smacked off of a soldier’s face flies directly at the camera in super-slow motion before the audience is jerked back into the sweaty fray — and you’ve got a recipe for a film that starts to overstay its welcome within the first 10 minutes.

It’s a shame, really. King Arthur isn’t without style, and you can’t ask for a better corner for a would-be franchise than an actor like Hunnam. There are entertaining moments scattered throughout. Yet it’s likely that the next wave of CG excess will arrive before you’ve even had a chance to remember why you were, ever so briefly, having fun.