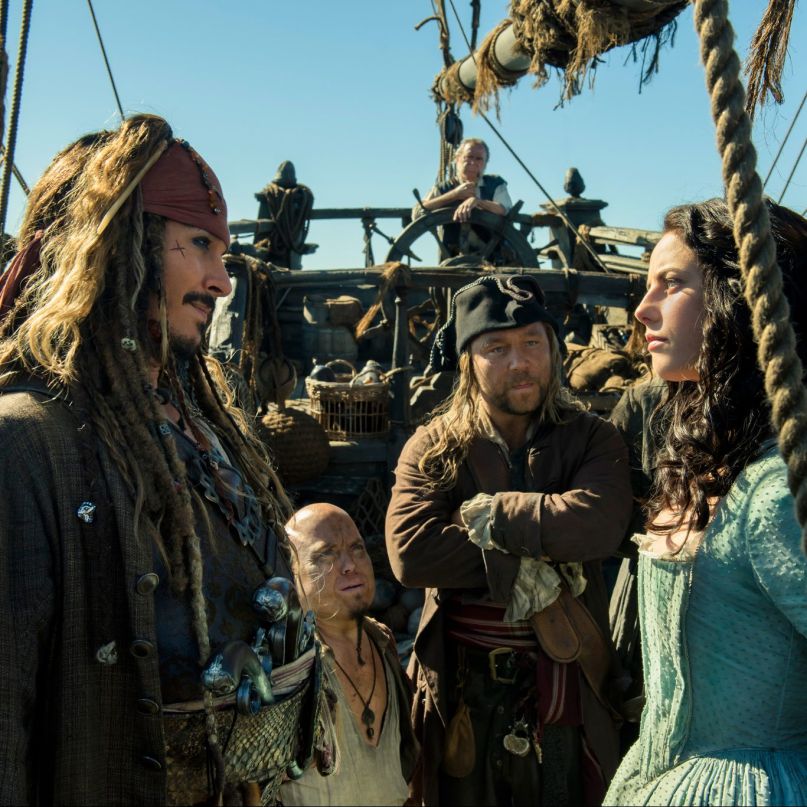 He looks tired. Like a broken circus bear, repeatedly dragged out in a tutu, coaxed with snacks and rum. Captain Jack’s back, cavorting and capering about at around 60%. But honestly, who cares?

Welcome back to Disneyland: The Spinoff Movie Pt. V. Or as Disney has market-tested and labeled it in the U.S., Pirates of the Caribbean: Dead Men Tell No Tales. (Salazar’s Revenge, if you’re reading this in a European market.) And what a chore it is to talk about this film. As a franchise, the ship hasn’t just sailed, it’s already sunk. This is the barnacled entry in a once-creative commercial odyssey. Depp’s back and shagging it for a presumably hefty payday (he made an alleged, and criminal, $55.5 million for On Stranger Tides in 2011). But what has the alcoholic bandana enthusiast Jack Sparrow been up to, you ask?

Ahoy, all-ages adventure! At least “all ages” inasmuch as “all ages” can mean bloody heads, retrograde yuks about bonnets and ankles, and notes of zoophilia. Captain Jack is back, and sailing the high seas in search of Poseidon’s trident. It has curse-lifting properties, presumably of the kind that could free Depp from commercial ensnarement. Just kidding, Captain Jack doesn’t even want it – it’s the object of desire for other parties, like deformed sailors and rascally young actors forced to enunciate while Depp slurs and wobbles.

But the MacGuffins don’t stop with the trident. Jack loses his magical compass that points the user to the thing he or she most desires. And by “loses,” we mean to say that he trades his compass for a bottle of rum at a pub. When Jack gives up his precious toy, he accidentally frees an old foe, a Spanish pirate slayer named Salazar (Javier Bardem, at the low end of his big-movie villainy). As you might have already guessed, the MacGuffins aren’t particularly useful beyond serving as plot points.

In flashbacks, we learn of how a young (and eerily CG-smooth) Jack Sparrow tricked Salazar into a cursed cave that transformed Salazar and his men into pale, chapped zombies. His crew can walk on water, and they’re missing body parts. Salazar gargles as though speaking through a vocoder, with an asthmatic wheeze, hell-bent on capturing Sparrow. It used to be that a campy Javier Bardem performance was the refuge of the cinematically damned, but not even he can rise above the barrels of clutter. Any venerable actor of the moment could have taken his place. He’s buried under layers of ash, cracks, and hair made to look like it’s constantly wafting underwater.

But wait, there’s more. Another MacGuffin comes in the form of a ruby-studded treasure journal, with a map to the elusive and magical trident. It’s in the hands of a plucky horologist named Carina (Kaya Scodelario), the butt of cheap jokes of a supposedly “self-aware” variety. She’s called a witch, and looked upon with bafflement by mugs when calling herself a “horologist.” It’s an auditory pun. Hyuk. Plus, there’s a necklace owned by a young sailor named Henry (Brenton Thwaites), a symbolic MacGuffin belonging to Henry’s father, Will Turner (Orlando Bloom) from the initial Pirates trilogy. Henry believes that the trident could free Will of his curse, and one can’t help but wonder why Will didn’t just seek the trident for himself.

The film runs on weak and contrived reasoning to get Depp back at the helm, because On Stranger Tides made a billion dollars globally. But now it’s time for the good stuff. The high-seas intrigue, and the once Oscar-nominated Jack Sparrow.

Well, think again. After a while, Dead Men Tell No Tales feels like a waste of resources to build a false reality for a fading star, unwilling to have his sunset if the money’s still good. W.C. Fields once said, “If you can’t dazzle them with brilliance, baffle them with bull.” The lead of the latest Pirates is neither brilliant nor baffling at this point. Fourteen years after the original, Depp’s become the butt of his own prolonged joke. Now we know: $50 million will get you Johnny Depp making winky faces about incest in 2017.

Consider for a moment that Dead Men Tell No Tales was filmed two years ago, required 2016 reshoots in Vancouver, and was met with controversy surrounding its planned use of Australian animals. The film plays less like a movie than an accumulation of moments, CGI packets, and screen tested “humor” in the vein of Depp squeaking the word “monkey” in Terry Thomas-like ways. Coming off the ravishing and low budget Kon-Tiki, Norwegian directing duo Joachim Rønning and Espen Sandberg are the latest independent filmmakers to be saddled with a big-budget franchise right out of the gate, and they’re no match for the Disney machine.

Disney’s summer formula is the sum of sets, effects, and star budgets coming first. Then, the script; or in this film’s case, breathy explanations yielding to the visuals and pursuits of the aforementioned MacGuffins. The studio was probably hard at work well before principal photography, rendering green screen ships at different angles for Rønning and Espen to choose from. There’s no voice, no style, and no real intrigue on hand. It’s all a slow sail to the next outsized setpiece.

Take the opening stunt. The film begins with an impossibly staged chase, featuring Sparrow atop a rather large bank being pulled by a dozen horses. Never mind the neverending length, or the fact that this happens on an island and the story mechanics are implausible at best. It’s simply not fun to watch the scene progress without any real joy. Gore Verbinski could sell an image like the spinning-wheel swordfight in Dead Man’s Chest because of his timing and wit. Here, it’s a CG Depp popping up in one artificially achieved shot after another, with no rhythm, weight, or urgency. It feels like an eternity of shtick, a ceaseless rattle of cartoon imagery protracted to the point of boredom and exhaustion.

Sparrow dances atop cannon barrels and swings swords with Bardem, but the rapid cuts and 3D-darkened rain-at-night visual pallete makes a good bit of the film impossible to follow, let alone invest in. Jack is almost beheaded 30 minutes in, but everyone knows he’d never be slain by Disney, so there’s no tension at all. And of course there’s a cumbersome final act filled with water particles, parted seas, aquarium colors, and other splashy effects that furiously blur together. None of this stuff, this junk, this damn trinket-ry constitutes a movie.

Virtually nothing goes well for Dead Men Tell No Tales. The script is a morass, the aesthetics are hard on the eyes, the drama is mostly expository, the performances are lifeless, and all of the so-called “spectacle” is ultimately deadening. Oh, and the Paul McCartney cameo sucks, too.