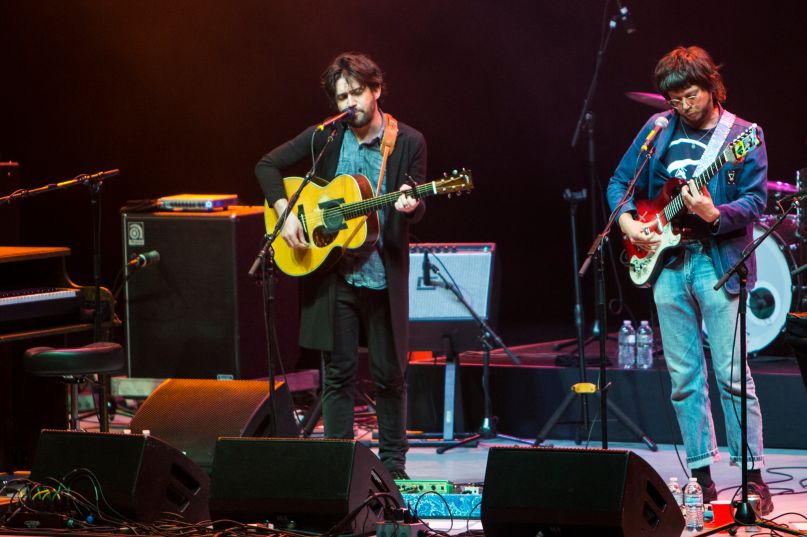 Conor Oberst has long been a two-sided coin. Early on, he was a child prodigy, young enough to write fearless lyrics that were wise beyond his years, but still dusted with concerns that might make the best sense to teenagers. As his career progressed, he would even celebrate his biggest album release as Bright Eyes with two records, each focusing on a different interest, be it the more synthetic Digital Ash in a Digital Urn or the rootsy Americana of I’m Wide Awake, It’s Morning. And beginning last year, Oberst marked his latest endeavor with duality: the spare, intimate Ruminations and this year’s fleshed-out versions of those same songs on Salutations.

For fans in Los Angeles, these releases were marked by a pair of shows. For Ruminations‘ support, Oberst performed in a church, playing with just a single backing performer in what was an emotional pair of shows, coming right on the heels of the death of his brother. And on Saturday night, Salutations received an appropriately larger presentation, outside on a particularly chilly evening at the Greek Theatre. Oberst can occupy both worlds successfully, but that doesn’t mean both have to be equal.

Upon Ruminations’ release last year, there was plenty of talk about it being a return to form for Oberst, striking a chord for those that were drawn to his early songwriting. The fact that he’d shed his dad-rock tendencies was seen as a positive, and the shows that accompanied it played off that narrative. Oberst honored the record with a front-to-back presentation, and wedged in a selection of old songs into a second set that complimented his newest offerings. Yes, the most memorable part of that church show was his gut-wrenching rendition of The Replacements’ “Here Comes a Regular”, dedicated to his brother Matt who had taught it to him on guitar when they were kids. But songs like “The Big Picture” and “White Shoes” also struck chords that went beyond their recorded forms. It was an illuminating set, and one that felt nourishing at the time.

Saturday night’s appearance felt much different. Maybe it was the fact that the venue was half empty, and that those on the outer rims of the large venue had to deal with an abundance of chatty weekenders. Maybe it was the setlist, which lacked for the show-stopping moments of which Oberst is capable (I’m Wide Awake numbers “Lua” and “Poison Oak” were the closest it would come, unstoppable songs in their own right but ultimately weakened by the space in which they were presented). Maybe it was the presentation, backed by multiple Felice Brothers for arrangements that were technically proficient but diminished the songs’ heart. Or maybe it was just the fact the opener Julien Baker stunned with her 30-minute opening set, and that anyone coming after her, even a legend like Oberst, pales in comparison.

But the truth is that Oberst can exist comfortably in both of these forms. He can play the role of bandleader or of troubadour. With more than 20 years of recordings in less than 40 years on planet Earth, he’s earned the right to follow his inclinations and broad interests. It might mean that Salutations and the tour that follows it doesn’t quite land as firmly as Ruminations, but the presence of both ultimately makes Oberst a more interesting artist.