Musical memories were revisited and created by the Canadian artist 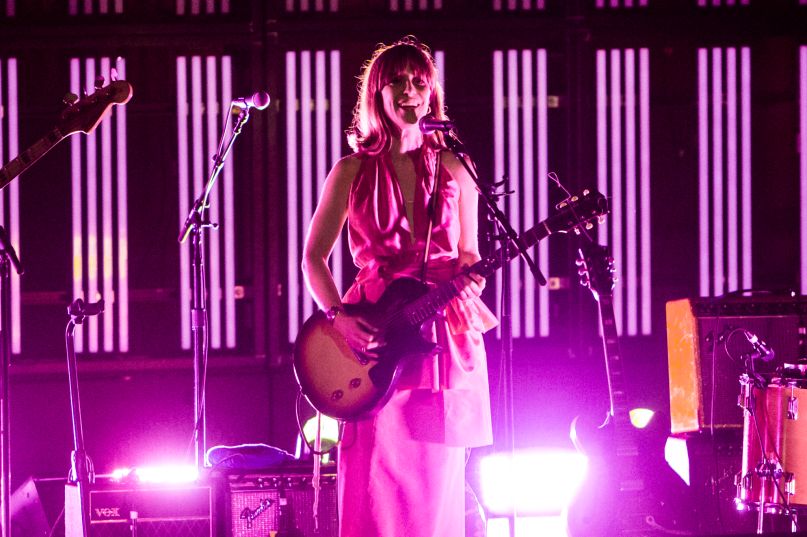 “This venue tonight belongs to you,” Feist announced early on during her sold-out performance at Los Angeles’ underutilized Palace Theatre, just after wrapping the title track from her new album, Pleasure. “That includes the space up front and the aisles,” she added, a reaction to the seated room and a nod of permission that caused a flurry of fans to rush close to the stage, essentially turning the venue into a split contingent of standers up front and sitters in back.

But regardless of this selfless sentiment, the room really belonged to the artist. Leslie Feist is well into the heart of a career that’s included success as a member of a celebrated collective in Broken Social Scene, individual acclaim with 2004 breakthrough Let It Die, surprise stardom thanks in part to an iPod commercial in 2007 for The Reminder and its smash “1234”, and even a brush with underappreciated majesty with what might be her best album, 2011’s Metals. Never an artist to work too quickly, she took her time with her latest, Pleasure, and in turn, she gave the record a coming-out party it deserves, a front-to-back performance that revealed yet another towering, complex, and ultimately inviting work from an artist yet to disappoint.

It was maybe the best way to experience a new collection. With a captive audience, Feist punctuated the week-old songs with blasts of pink LEDs, her hiccuping vocal tics, and plenty of between-song humor to keep the evening light. Pleasure is an album notable for a commitment to guitar when many of her aughts indie contemporaries are abandoning the instrument. And Feist has made the tool her own. As much as her personality is evident in her singular vocal style and sturdy songwriting, her guitar work is equally revelatory. Most of the time, she requires no other lead from her three-piece backing band, handling the bulk of her music’s heavy lifting herself. A song can stand out because of its refrain (“You know I’d leave any party for you/ Because no party is a sweet as our party of two” on “Any Party”, a chorus affecting enough that Feist had t-shirts printed with the lyric), its groove (the bluesy “I’m Not Running Away”, the new entry into her catalog most likely to break out), or the way she sells it (her fist-punching delivery of album closer “Young Up”, her commitment to tender intimacy on “Baby Be Simple” for one of the evening’s most beautiful moments), but never is there any question of whose vision you are witnessing. Feist invites you into her world, not the other way around.

“Before 2017, there were other years like 2004, 2007, and 2011,” Feist noted after completing her run through Pleasure, posing the suggestion that both her and the audience revisit some musical memories together, while adding that hopefully in 2025, we can look back at 2017 as fondly. This was the entryway into a set of past favorites, hitting on some of her most beloved tunes while paying tribute to her career to this point. “Sealion” was presented with room for audience harmonies, “My Moon My Man” completed with audience handclaps (a feature Feist would request in many of her songs), and the main set-finishing “Let It Die” rounded out by a trio of hand-selected couples slow dancing on stage. Be it melancholy or exuberant, each song was delivered as a celebration, a chance to look both backward and forward with the same lens. By the end, with a pair of her most well-known compositions, “Mushaboom” and “1234”, Feist’s two-hour set was an exercise in graciousness, a reminder that low-key humility and performance grandeur can exist in the same space. It was Feist’s stage in Feist’s theater, and for a night, the world seemed right.

Setlist:
Pleasure
I Wish I Didn’t Miss You
Get Not High, Get Not Low
Lost Dreams
Any Party
A Man Is Not His Song
The Wind
Century
Baby Be Simple
I’m Not Running Away
Young Up
A Commotion
My Moon My Man
Sealion
How Come You Never Go There
Caught a Long Wind
The Bad in Each Other
I Feel It All
Let It Die
Encore
Mushaboom
1234