The "engaged, fascinating" music legend did "not stop talking for three hours" 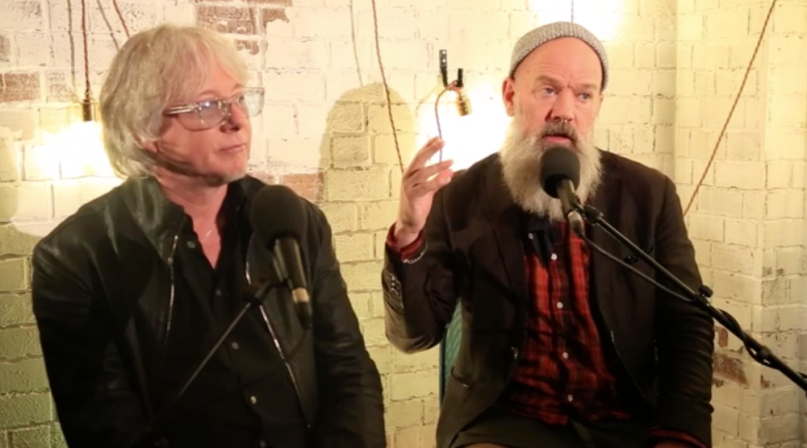 Last year, Michael Stipe paid homage to the late, great David Bowie by taking part in a number of tribute shows as well as delivering a moving cover of “The Man Who Sold the World” on The Tonight Show. Today, in a segment for BBC’s The First Time With… Stipe and former R.E.M. bandmate Mike Mills recounted the very first time they met the music legend in the flesh.

It was 1995 and the band was stuck in Switzerland while waiting for drummer Bill Berry to recover from an aneurysm he’d suffered onstage. Montreaux Jazz Fest co-founder Claude Nobs invited R.E.M. to dine at his house, where Bowie was expected to make an appearance. “I said, ‘I need to take a nap,'” Stipe recalled upon hearing about the evening’s special dinner guest. The group had been touring nonstop and was exhausted.

“It took three espressos for me to walk down the stairs and look David Bowie in the eye and say, ‘How do you do? It’s nice to meet you finally,'” continued Stipe. The frontman said that during their encounter the Thin White Duke had with him a book of original art, mini sculptures, and a photograph of a young James Dean, and was “so engaged, so funny, so smart. “He did not stop talking for three hours.”

Watch the segment below.

In the same episode, Stipe also gave tips on how to maintain a beard as wild and flourishing as his own (via Stereogum):

“I wash it with shampoo, and I’ve tried conditioner, but it doesn’t condition very well. I’m kind of going for — rather than skid row Santa, I’m kind of going for a Poseidon-slash-Zeus-slash-Brancusi, uh, Matisse kind of appeal. And so I keep it a little trimmed on the sides to show off my beautiful cheekbones. And that’s about it, really. I put some oil on it from time to time.”