All proceeds from Hugs For Chelsea go to Manning, who was just released from prison 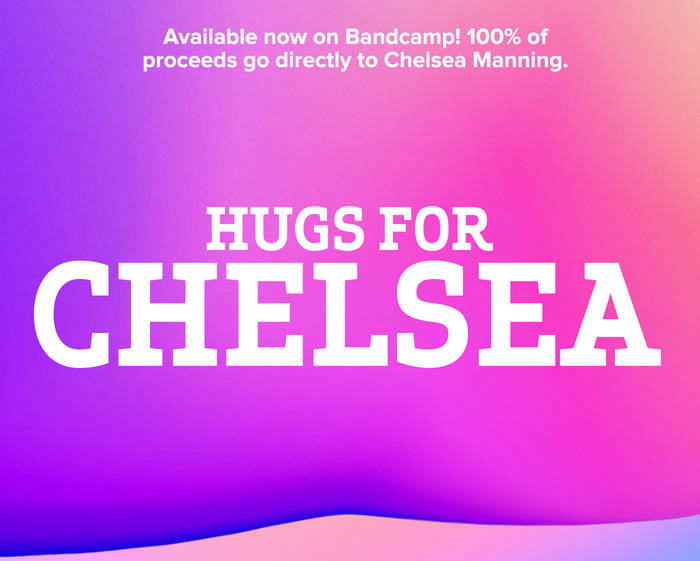 In 2013, former Army intelligence analyst Chelsea Manning was sentenced to 35 years in federal prison for leaking classified information to Wikileaks. However, in the final weeks of his presidency, President Obama commuted Manning’s sentence, and today is her first day of freedom.

Manning’s arrest, sentencing and subsequent sentence reduction have been the subject of widespread controversy, but many in the artistic community have championed Manning’s plight throughout the ordeal. Now, a number of musicians have joined forces for Hugs For Chelsea, a compilation benefitting Manning’s cost of living as she leaves prison and re-enters society.

Appearing on the album are Michael Stipe, Thurston Moore, Against Me!, Rage Against the Machine’s Tom Morello, Ted Leo, Downtown Boys, Priests, Screaming Females, Talib Kweli, Amanda Palmer, Kevin Devine & The Goddamn Band, and more. Find the complete tracklist below, along with a stream of the entire comp. You can purchase the 32-track collection for yourself or donate over at Bandcamp.

Manning first came into the public eye when she was arrested and charged with 22 offenses for providing Wikileaks with hundreds of thousands of classified documents and videos relating to the USA’s conflicts in Iraq and Afghanistan in early 2010. Manning believed what she’d seen while on duty showed both wars to be illegal, and hoped the leaks would alter public opinion of the conflicts to help end them. Alternately regarded as a traitor and an honorable whistleblower exposing illegal activities by the US military, Manning was immediately a lighting rod for controversy and faced charges that could have resulted in a death sentence.

The complexities of the case were further exacerbated by the fact that Chelsea, who was born Bradley Manning, announced the day after sentencing that she had always identified as female and planned to undergo hormone replacement therapy. This revelation only fueled the acrimony of Manning’s detractors on the right — but it also galvanized her supporters on the left who, already incised by the length of Manning’s sentence, became outraged when Manning’s forced isolation in prison lead to multiple suicide attempts.

Despite calls from Amnesty International, The Guardian and The New York Times for a lesser sentence and a petition with over 100,000 signatures in her favor, there was little hope of a commutation of Manning’s sentence until President Obama, with just two days left in office, declared Manning would be released in just four months.