10 Years Without the White Stripes

It's now been a decade since Jack and Meg released their final album, Icky Thump 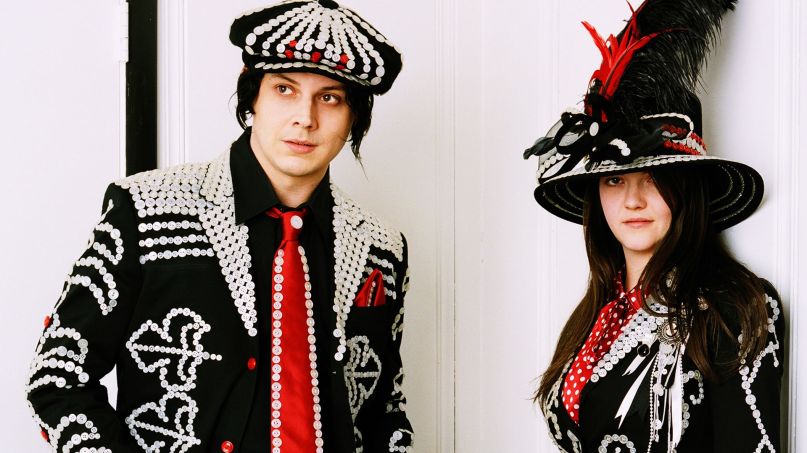 Dusting ‘Em Off is a rotating, free-form feature that revisits a classic album, film, or moment in pop-culture history. This week, Dan Weiss revisits what would wind up being The White Stripes’ final album, Icky Thump, on its 10th anniversary.

A few years ago, Travis Morrison of the Dismemberment Plan and I once ended up in a parlor game on someone’s Facebook page, where we were trying to figure out what the last R-I-F-F in the popular consciousness was. He maintained it was The White Stripes’ thunderous kick-drum tango “Seven Nation Army”. I thought of the instantly memorable synth intro from MGMT’s “Kids”, but I wasn’t 100 percent on this point. I just found it impossible that there was no Hendrix/”Teen Spirit”-sized riff to sweep all airplay formats since 2003. Travis argued that “Kids” doesn’t quite count as a riff because it’s never again isolated in the song after the intro; it plays under the chorus, which is what it’s really serving. I don’t know if I agree with that, but the riff from “Seven Nation Army” inarguably deserves — and gets — its own time in the song, a wordless chorus heard ‘round the world just like “Tequila” or the disgraced Gary Glitter.

The White Stripes wrote big, popular, videogenic songs built around A Riff, with plenty of Riff Moments unencumbered by a vocal or anything else. Their final album, 2007’s excellent, truly bizarre but also Grammy-certified Icky Thump, was released 10 years ago today. And in that span of their absence, very few successors, not even their be-loathed Black Keys or the more hopeful Alabama Shakes, have attempted to fill that gap in rock music, leaving it wholly up to Skrillex and EDM and other genres (Jason Derulo proudly reps it for pop) to reclaim the instrumental break for their own.

This, in itself, isn’t a bad thing, and other genres — particularly, country, rap, and R&B — have flourished in the 2010s during some kind of renaissance they’re belatedly enjoying sonically and conceptually, all while rock itself splinters into camps so balkanized that if it were to somehow storm the charts again, we wouldn’t have any idea where this resurgence would be coming from. But no one likes to miss a band, especially one commandeered by a virtuoso as wild (and compact) as Jack White. The duo’s secret weapon remains his controversial “sister” and ex-wife Meg, his only notable drummer despite plenty of good releases from (in descending order of preference) The Dead Weather, Jack solo, and The Raconteurs.

It’s no surprise then that people don’t worship these releases as they do for those by The White Stripes, and it’s also no surprise that Meg’s “primitive,” minimalist whomping style received likely more shit than she could take. Her banging keeps things loud, big, open, and rough, while Jack nails down the precise, the pyrotechnic, the intricate, the haywire. She doesn’t write the songs, and she’s a woman being compared unfavorably to her male counterpart every day. She’s said to hate the spotlight. Go figure. But you notice Meg’s unmistakable, impatient kick drum on “Seven Nation Army” before Jack’s baritone guitar takes over, and those are her cymbal splashes surfing the tidal wave of the instrumental chorus as well.

It’s she who breaks up 2000’s taxman-taunting “Hello Operator” with endearing click-clack drumstick solos as palate cleansers. It’s also her voice that imparts the advice of 2005’s sly, 35-second “Passive Manipulation” (“You need to know the difference between a father and a lover”), who plays Jack’s comedic foil on 2003’s goofy ménage a trois “It’s True That We Love One Another” (“You know I don’t care because Jack really bugs me”), which may as well be answered on 2007’s hoarder paradise “Rag and Bone” (“Now Meg, don’t be rude”).

Something that’s never been said with any traditionalist band before or since is that we need to talk about the visuals. The White Stripes had plenty of unoriginal ideas (and how could they not, as a hip-hop-averse white blues-rock duo), but they were inarguably original in their presentation, in being the last blues-based act to move forward with the artistic formats of the times. Every video in their career was at least a small marvel, and ditto for every riff they visualized. Michel Gondry helmed the best ones, making Legos rock in “Fell in Love with a Girl”, making a visual marvel of 32 peppermint-colored drum kits in “The Hardest Button to Button”, and turning an ordinary Conan O’Brien appearance into a psychedelic, body-distorting flashback in “The Denial Twist”. Their strictly color-coded costumes always made for arresting, mysterious album art as well, particularly in the ominous cowboy getups on Elephant , the prematurely fame-eschewing paparazzi tableaux on White Blood Cells, and the Grand Ole Opry-meets-Zorro fanciness on Get Behind Me Satan.

This was a band of foils like virtually no other in rock history, except for maybe Pet Shop Boys, whose silent anchor Chris Lowe has some kinship with Meg but is far less talked about for his playing style. Their personalities were distinct: quiet/loud, silent/vocal, basic/complicated. Jack insists she was his equal to this day, and she probably was. He’s certainly tried to do it without her; at Bonnaroo 2014, he put on a great set with a full array of sidemen and women, stealing hits from all over his career and “Misirlou” as well. But the overall effect was too competent. Compare it with The White Stripes’ Under Blackpool Lights concert film from a decade before, which crackles with Jack and Meg’s nervous energy as they telepathically hopscotch all over their goldmine of meter-melting riffs and throw Son House and Leadbelly a few as well. Competent? Who knows. Revolutionary, absolutely.

Jack also simply wrote better songs with Meg. Elephant, from 2003, is their most-celebrated, thanks to “Army” as well as the chugging “Hardest Button to Button”, paint-peeling “Ball and Biscuit”, and (also Meg’s idea) an excoriating version of Burt Bacharach’s “I Just Don’t Know What to Do with Myself”. But it flows oddly (three ballads in a row?) and they topped it at least three and maybe four other times. To wit: the pre-fame De Stijl in 2000 was their blues peak, full of Jack on slide (“Little Bird”) with detours for ragtime (“Your Southern Can Is Mine”), Nuggets-style ‘60s pop (“You’re Pretty Good-Looking [For a Girl]”), and soon-to-be-Earth-shaking caveman rock (“Jumble Jumble”). Then 2005’s polarizing, guitar-averse Get Behind Me Satan ended up flowing better than Elephant and improving on it in every way, with the credible fan-character study “Take, Take, Take”, interjection-happy marimba oddity “The Nurse”, and three of their greatest singles, including the mighty, electric toothbrush-like “Blue Orchid”, which is every bit “Seven Nation Army”’s equal if you’re honest.

Icky Thump was even weirder, yet even tighter, with the dueling synth-bombast of the title hit, Patti Page’s man-eating “Conquest” redone as mariachi-metal, and the simple-enough country closer “Effect & Cause” condensing Jack’s woman problems into a tidy little box of metaphors. It vies for their greatest with White Blood Cells, 2001’s avowedly blues-free monolith that put the Stripes on the map with the headlong “Fell in Love with a Girl” and the barn-burning valentine “Hotel Yorba”, both as aggressive as they were romantic. The shrieking “The Union Forever” and industrial clanging of “Little Room” were just as revelatory. Only their scratchy, eponymous debut from 1999 falls a little short, though it peppered their set lists with plenty of highlights to the end; Under Blackpool Lights, the Stripes’ greatest moment, makes mincemeat of “Astro”, “Do”, and “I Fought Piranhas”. Include it in your canon and that’s six essentials. Out of seven. They’ll be missed, and not just for those riffs.