Outkast MC sets sights on the stars and captures some flashes of brilliance. 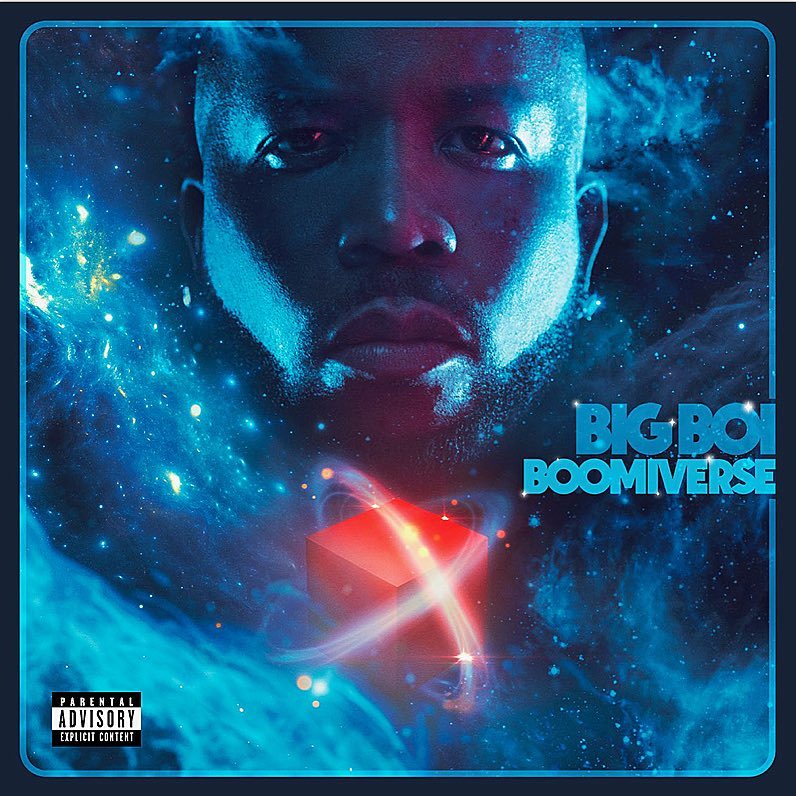 Five years after the release of Vicious Lies and Dangerous Rumors and over 20 years since putting the South on the map with the seminal Southernplayalisticadillacmuzik, Outkast alum Big Boi drives his ultra-clean Caddy into the cosmos on Boomiverse. Keeping with the futurist ideals and sub-busting bass that informed the early ATLien aesthetic, Big Boi takes listeners back to the speakerboxxx with a release that combines the foundational pre-turn up, Southern rap sound with uptempo, EDM-inspired party jams.  Likely as clean as you have ever heard it, Big’s flow is the glue that holds an otherwise disjointed project together with cadences that kick the songs into hyperdrive, cement his versatility, and prove that he and the Organized Noize production team — the guys that built The Dungeon and the bulk of the joints on this album — might be close to returning to form. Their indecision about the creative direction of the project, however, takes away from the overall quality of the release.

With darkness covering the universe, Big Boi makes it his business to breathe life back into the game with a project that challenges the conventions of Top 40 rap as deftly as it drops a nod to them and plays to his infatuation with experimental music. He successfully brings some OG spitters back to the table, most notably Pimp C, to reaffirm the roots of dirty South rap culture — a sound that conjures cars on vogues, bounce-heavy strip clubs insulated with 808, and tough chatter delivered with a slow-simmered drawl.  Opening with frequent collaborator and architect of The Brainchild, Big Rube, Big Boi makes it clear on “Da Next Day” that his intention is to give the new class a primer on the pillars of Southern rap and keep the interdimensional party that began with his 2010 Sir Lucious Leftfoot… solo debut rocking by any means.

Still cooler than a polar bear’s toenails, Big Boi is in rare form on “Kill Jill” — the atmospheric slapper of a lead single anchored by the ambient vocal of Japanese singer Hatsune Miku and punctuated by Jeezy’s signature growl. The lead single finds Big Boi spitting what might be some of the hardest bars of his career and resuming his collaborative bromance with fellow A-Town legend and Jewel Runner Killer Mike. With the bar for the album set by the end of the second track and Big’s knack for shining against a diversity of sonic backdrops well established, it becomes unclear whether he can sustain that momentum on the ambitious, but unfortunately forgettable Adam Levine-assisted dance track “Mic Jack”.  True to its title, “Overthunk” featuring Eric Bellinger reinforces skepticism about Big Boi’s ability to carry tuned-up dance records beyond cameos and his post-Kast crossover projects.

While he does find redemption in the bootyshake revival record “Chocolate”, Big Boi’s forte is clearly still bodying bottom-heavy rap beats and flexing on posse cuts — both tasks that should always warrant his undivided attention. Especially given that Big Boi is always at his best trading bars with battle tested MC’s. Pulling Gucci Mane and Pimp C out of his hat for “In the South”, however, Big Boi drops a gem big enough to make fans forgive the foul. His flair for quirky melody resurfaces on the Dr. Luke-produced single “All Night”, which combines Spaghetti Western stride with trunk-rattling bounce to a decent degree of success. The combination of sounds, however, could prove to be an acquired taste for some. The magic is resuscitated on the ambient and ultra-dirty “Made Man”, which finds Big, Killer Mike, and Kurupt playing up their itchy trigger fingers and fire pen game. Sewing things up with the Killer- and Curren$y-assisted “Follow Deez”, Big finishes strong with a production from NOLA-bred beat god Mannie Fresh.

Though the project sports a number of notable hiccups, Boomiverse is an otherwise solid solo release that follows the success of his 2015 Phantogram collaborative project, Big Grams.  While Big Boi’s sonic exploration of deep space could have benefitted from more decisive direction and his pandering to Las Vegas club kids should have been left to the cutting room floor, his rapid-fire delivery, chameleonic adaptability, and aptitude for dropping absolute bangers did not waver once. The problem is that the wins just do not happen enough. The obvious gaps between standout cuts will likely prove problematic for anyone interesting in listening to the album without skipping tracks.

Across eras, Big Boi has managed — with or without Three Stacks by his side — to remain respected as a veteran spitter with the ability to strike a nerve and resonate over and over again. His thirst for experimentation is a commendable trait that, if nurtured with continued assistance from visionary production trio Organized Noize, could tease an entirely new sound from the intersection of electronic music, trap, and dirty South classics. One that might just position The Dungeon Family to become legends all over again. There are flashes of that kind of brilliance all over Boomiverse, but they are fleeting. Whether or not the potential of the sound booming from this new plane is ever realized is entirely up to Big Boi.