HAIM – Something to Tell You 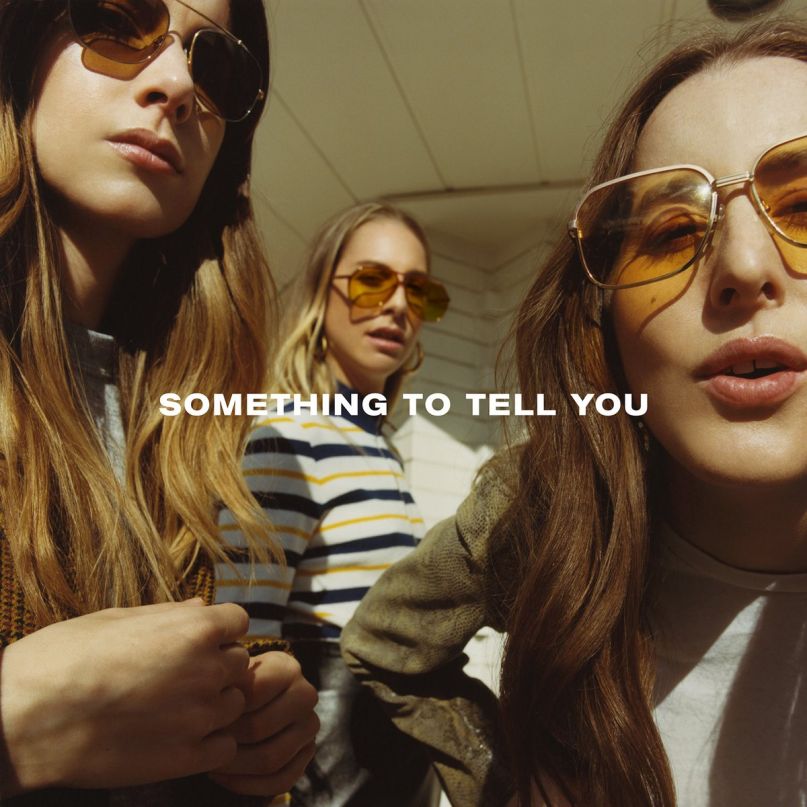 Taking four years to return after a highly praised debut is no longer a risky proposition. HAIM came to dominance before they’d even dropped a full-length, and they’ve managed to remain at pop’s forefront ever since thanks to impressive live shows. That’s fully to the credit of the sisters themselves, a talented, charismatic trio of true musicians who earned their esteem by writing and performing truly entertaining pop rock. Now that HAIM’s finally returned with their sophomore effort, Something to Tell You, it’s time to see if it affirms their seemingly adamantine popularity.

Despite some technical flaws, the trio’s followup to 2013’s Days Are Gone mostly delivers on the sort of decade-defying jams that allowed them to reach such heights. Unfortunately, in lieu of pivoting on the inherent strengths in the sinewy blend of ’70s rock and accessible pop that defines HAIM, Something to Tell You labors too hard to be a modern studio album. Though, seeing how they came into this record with past connections to Calvin Harris, ASAP Ferg, and Taylor Swift, it’s not very surprising to discover they’ve let the vast pop scene that embraced them inform their music. However, rather than leading HAIM toward a clearer understanding of themselves, it feels as if these influences have pulled them farther away.

Earlier this year, Danielle Haim told Rolling Stone that the band was less focused “on studio fuckery” this time around, but that frankly isn’t apparent here. Instead, skilled songwriting gets underserved by what producer Ariel Rechtshaid called “production bullshit” in that same paragraph. Take lead singles “Little of Your Love” and “Want You Back”, for instance. They’re both easily enjoyable entry points that make good on HAIM’s gifts for undeniable hooks and approachable cool. Yet, they also regrettably hint at the heavy-handedness that hamstrings too much of the album. The former opens with panning hums and a modulated vocal line that sounds like a parody of Scream’s Ghostface killer, a voice that reappears in the final refrain to disturb an otherwise effective pop-rock shiner. And while the latter might be the most solid track on the album, it, too, arrives dented by strange vocal fades and a squiggly 10-second outro. It should be noted that many of these quirky accouterments get axed during live performances, a solid choice by the trio that only accents how bothersome they actually sound on record.

Too frequently, strong concepts are left weakened by overworking like this. “Found It in Silence” is a determined declaration of independence that runs toward the hills on invigorating strings and percussion, but it trips on beams of electronic nonsense that come out of nowhere. It happens again with “Ready for You”, a smooth bit of ’80s pop with a damn fine hook co-written by Twin Shadow’s George Lewis Jr. that gets interrupted by a corny, buzzing bridge and confounding background washes. Even when the flourishes do succeed, they’re inevitably trapped by further tinkering, a snare that catches “Nothing’s Wrong”. While the song’s gasping vocals effectively lend weight to its theme of struggling to find the right words, they die out in a messy array of awkward modulation and wobbling synths.

It’s easy to see how all these tracks work on paper, and they do for the most part. Things only start to become distracting when HAIM attempt to toy with flares of electronic R&B, folding the sound on top rather than blending it in. Cringeworthy, echoing voice-overs are wildly overused, and a lack of restraint often crushes raw power under the weight of more stuff. Look no further than “Right Now”. If you recall, an early version of the track appeared in a video preview of the LP this past spring. There, it was a sparse, emotional journey taut with layered instrumentation and vocals. On record, however, Este’s wonderful backing track is smothered by cottonmouthed modulation (again!), and Alana’s intentionally unclean guitar riff gets blown out by a wall of noise. What’s worse is how it actually mutes Danielle’s moment of redemption, obscuring the album’s best story.

As the latter half leans further into R&B, these diversions are notably reduced on two of the album’s strongest experiments. “Kept Me Crying” alters the sisters’ vocals in ways that add substantial texture instead of robotic distraction, the echoing “shoo-wops” of the verses imparting a doo-wop lightness to contrast the spurned-lover Americana of the lyrics. “Walking Away” sounds even better, bringing the Haim sisters front and center for a brilliant echo chamber of brokenhearted meditations that recall the best of early ’90s R&B. It’s arguably the most successful attempt at the genre on the album, and wouldn’t you know it, it’s the only song completely absent of Rechsthaid, who’s supplanted behind the boards and in the writing room by Rostam Batmanglij. The former Vampire Weekend mastermind also co-wrote and co-produced “Kept Me Crying”, which further proves his style is better suited for HAIM’s intentions on the album.

That’s not to lay all the fault at Rechtshaid’s feet. To be fair, the musicians don’t exactly display a ton of growth as songwriters given that nearly every song doubles down on a formula that becomes all too familiar: verse, simple hook, verse, minimal vocal bridge, and hook again until … fade out. About 75% of “You Never Knew” is just the hook, which in itself is only two couplets repeated, while even winning tracks like “Little of You Love” succumb to a little predictability, especially when the music cuts out ahead of its crowd-pleasing chorus. Although this could have been convincing proof of the “if it ain’t broke” maxim, the band add too much muck to let the earworms crawl in as deeply as they did on Days Are Gone.

Thankfully, if you can dig through the shortcomings, there’s enough here to grow into something relatively satisfying. There’s even more promise for greater concerts, as it’s near-impossible to doubt the band’s live charm. Regardless, Something to Tell You isn’t likely to change HAIM’s story, and the sisters’ presence is not going to fade anytime soon, nor should it. But as a recorded artifact, the album falls short of providing a greater realization of the band’s honest potential, losing its better threads in a clutter of noise too loosely woven together to enhance the intended tapestry.

Essential Tracks: “Want You Back”, “Walking Away”, and “Little of Your Love”