Enter the Cage: Con Air and Face/Off at 20 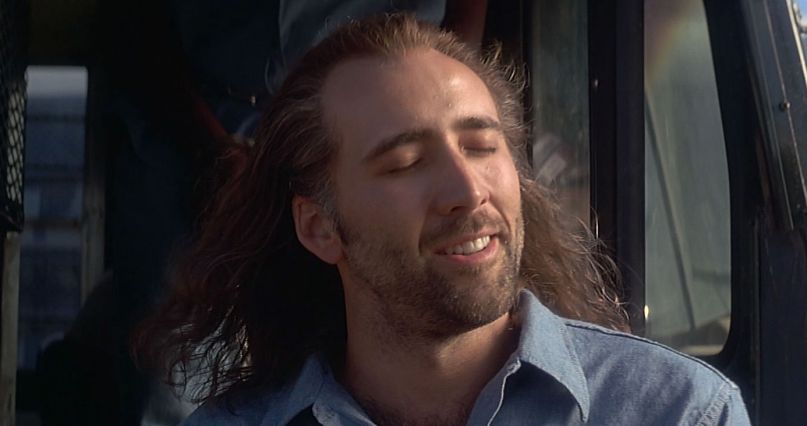 Dusting ‘Em Off is a rotating, free-form feature that revisits a classic album, film, or moment in pop-culture history. This week, film editor Dominick Suzanne-Mayer looks back at a pair of Nicolas Cage vehicles celebrating 20th anniversaries this month that cemented the actor as an action lead: Con Air and Face/Off.

Long before Nicolas Cage was a meme, he was a goddamn movie star. It’s a fact that sometimes gets lost in much of the modern-day talk of wicker men and “Cage rage,” but it’s the truth. By 1997, Cage had already started to shed off the handsome charm of many of his prominent early performances in favor of the less conventional instincts evidenced in fare like Wild at Heart and Vampire’s Kiss. He ultimately changed his trajectory in 1995 with Leaving Las Vegas, a bleakly muted turn that saw Cage win Best Actor at the Academy Awards. In harnessing the feral energy that defined some of his most engaging work, Cage became an A-list headliner.

The summer of 1997 saw the fullest realization of Cage’s reinvention as a leading man in changing times. That June, a pair of star vehicles saw the actor expand on his attention-grabbing turn in The Rock a year earlier (which remains Michael Bay’s most accomplished film in its own right, in no small part due to Cage). The first up was Con Air, an opus of mayhem that even the most unaware filmgoer at the time could’ve probably identified as a Jerry Bruckheimer project. The mega-producer’s fingerprints are all over the film, from its over-saturated color palette to its outsized explosions to its attention-grabbing, star-studded cast. (It’s also another in a long lineage of Bruckheimer hits to launch a successful pop hit in its wake.) The template was simple: give the people a full evening’s entertainment, and send them home exhausted and satisfied.

As Cameron Poe, Cage plays as singularly American an action hero as the ‘90s ever had to offer. A military vet wrongly incarcerated for murder, Poe wants nothing more than to return home to finally spend time with the daughter he only knows through snail-mail correspondence. (One of the first in a long line of fantastically goofy plot contrivances surrounds his incarceration, inasmuch as Poe very clearly acts in self-defense during the film’s violent opening scene, but still goes to jail because the courts declare him a walking weapon in the Chuck Norris mode.) As he’s nearing his release on good behavior, Poe is loaded onto a retrofit aircraft designed to transport the prison’s most dangerous criminals, along with Poe and his diabetic best friend, Baby-O (Mykelti Williamson).

Soon, Cyrus the Virus (John Malkovich at a strong 80% of his scenery-chewing powers) has hijacked the plane, intent on liberating all of its degenerate crew and fleeing the country for non-extradition territories. Diamond Dog (Ving Rhames), a notorious black militant, has his own ideas for the plane’s post-escape plans. And there’s only one man who can save the day. Well, two if you include John Cusack’s harried US Marshal, who in the custom of the decade spends the whole film running around in a suit so large that it appears he’s wearing his father’s clothes. In any case, Con Air is Cage’s show, and he anchors the film with just enough of a wink to hold its excesses together, in both the figurative and literal senses of a “wink.”

It’s easy enough to dismiss Con Air as a relic of its era, and it’s not as though the film is wholly exempt from the less savory tendencies of Bruckheimer’s signature machismo. Particularly in the case of Danny Trejo’s Johnny 23, a notorious serial rapist with an arm tattoo denoting each of his victims, Con Air takes its premise in some thoroughly sleazy directions throughout. Simon West’s film dabbles in rape threats, some casual homophobia (through the mincing caricature of the prisoner ‘Sally Can’t Dance’), and an overly lengthy interlude involving the tease of Steve Buscemi’s Hannibal Lecter-esque mass murderer killing and eating a small child. Don’t worry, though; he doesn’t eat her, and even runs off to Vegas when the film’s action is all said and done for a stinger that the film plays as a breezy final punchline and actually comes off as a terrifying coda to the story.

Yet Con Air feels more spiritually akin to a piece of grindhouse sleaze than to many of its contemporaries, and it’s that loose sense of morally checked-out play that makes it such a cornerstone of the half-ironically appreciated side of Cage’s filmography. West directs the film with no shortage of spectacle, right up to the point where he crashes the plane onto the Vegas strip before seguing straight into a chase scene involving a fire engine. And for its faults, the film moves at such a relentless pace that by the time LeAnn Rimes’ “How Can I Live?” scores Poe’s long-awaited reunion with his family, Con Air wins you over as the very definition of a movie that knows exactly what it is, and does it well.

Cage’s turn as Poe managed to twist the chiseled action lead into something that an actor of his particular talents could fit into convincingly, which is what makes his bookending follow-up at the end of that same month all the more jarring. If Con Air wanted to leave its audience satisfied, Face/Off aims to tie it down and rail it until it forgets its own name. While Hard Target and Broken Arrow suggested that John Woo’s kinetic action filmmaking could translate well to the US, for the faults of both throughout, few could have been prepared for the hard left turn the legendary director would take with his 1997 hit.

Face/Off is almost balletic in its exaggerated action and violence, and it’s the kind of film that doesn’t really even pause to settle into the plot until nearly an hour in. Just consider what happens before the opening credits are even done rolling: a child is shot in the head on a carousel, a bomb is set to destroy the Los Angeles Convention Center, and Nicolas Cage brays along with a chorus, in a priest’s vestments, while groping one of the singers and making what might be the most Nicolas Cage face the actor has ever made in a film:

This marks a crucial moment of transition for the actor, as he’d start to blend his more serious work with performances in this vein more and more in the wake of Face/Off’s success. (It made $112 million domestic, which is a pretty remarkable figure for a film so singularly weird.) And if anything, Cage’s work as Castor Troy merely matches the tone of a film that takes its face-swapping premise about as seriously as a movie can. The general lack of irony on the film’s end is a notable component in what’s made it so ironically appreciable since, and Woo directs the film’s bursts of action with the kind of near-absurdist bombast that would later overwhelm vehicles like Mission: Impossible 2, but works to near-perfection in this context. (We’ll argue heartily for its merits as the best of Woo’s American outings.)

Woo’s signatures are all over Face/Off, from the diving gunshots to the liberal usage of slow motion, but what sets it apart are the leading performances. There are essentially three Nicolas Cage performances in the film, and each is a strange beast unto itself. First, there’s Cage as Castor Troy, a swaggering international terrorist with golden guns. Then there’s Cage as Travolta’s uptight federal agent, Sean Archer, which tasks the actor with carrying the emotional weight of the film as the straight man. And perhaps most triumphantly, there’s Travolta’s performance as Castor Troy inside Archer’s body, which sees the actor doing some of his most entertaining post-Pulp Fiction work by indulging any and all of his hammiest instincts.

But while Cage as Troy takes up a relatively small part of the film, these scenes have become the most iconic. Woo simply lets the actor go, and Cage snarls his way through one-liners, inexplicable reaction shots, and come-ons like “If I let you suck my tongue, would you be grateful?” It’s easy to laugh about now, when this is the version of Cage most familiar to an entire generation of moviegoers, but Cage’s work also raises the question of how many action villains since Face/Off have been so uniquely memorable. Where Con Air vaunted his sex appeal and screen presence as a more traditional protagonist, Face/Off tasks him with bringing his latter-day star presence and the thunderous mania of his work in early films like Zandalee to the table in the same film.

Face/Off struggles at times against the bloat common to Bruckheimer productions (and for that matter, most action movies of the time), but Woo’s direction hits such a feverish pitch that even the film’s sluggish back half is ultimately redeemed by its cacophonous grand finale, a cathartic opera of bullets and destruction and Woo’s signature flocks of doves. By the time the scene peaks with Cage and Travolta and a speedboat being fired into the air in lingering slow motion, as visually literal a “climax” as an action film can probably achieve, Face/Off emerges as a minor miracle, a Hollywood vehicle so defiantly unique in its stylistic choices that even its most ironic appreciators must respect the inspired lunacy of its craft.

The world wouldn’t stay so divine forever, alas. Cage would have a few more solid years before miring his handful of great post-2000 performances in a sea of campy over-performance and blatant paycheck roles, while Hollywood action filmmaking would sand off its authorial urges in pursuit of more conventional four-quadrant fare. But for a hot month in 1997, Cage was as big a star as the industry had to offer, in two of the wilder outings of the era. And even if each is an acquired taste in its own way, we’d argue that this is a time worth missing.