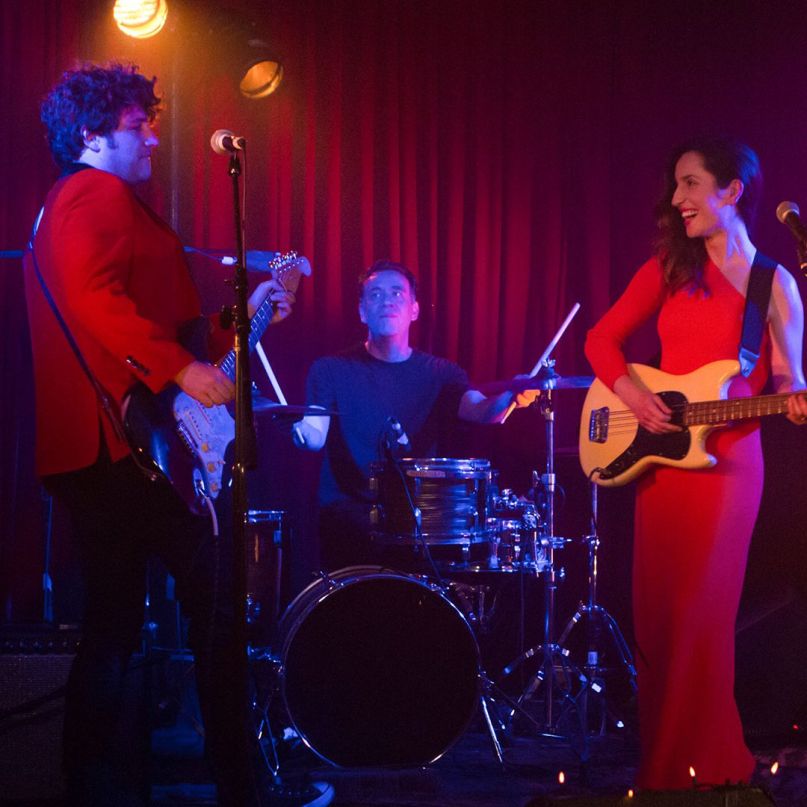 Band Aid is built on the kind of premise that wouldn’t feel entirely out of place in the kind of broad, midsummer romantic comedy that ruled the box office throughout the ‘90s: a struggling husband and wife, both frustrated artists struggling with personal turmoil, start a rock band in their garage in order to work their issues out in a healthier way. But what’s surprising, if a little disarming, about writer-director Zoe Lister-Jones’ debut feature is the way in which it refuses to give over to the innately saccharine tendencies of its premise. If anything, it swings boldly in the opposite direction, turning what’s initially a barbed-yet-cute comedy into an unexpected exploration of discarded pain.

Anna (Lister-Jones) and Ben (Adam Pally) are familiar types at this point in American culture: creative young thirtysomethings struggling with their aspirations and futures in the face of repeated failure, of both the avoidable and tragic varieties. And like a lot of frustrated younger couples, they largely deal with it through an unending parade of loud, unhelpful arguments. While it’s clear that Anna and Ben share the kind of goofy chemistry that keeps many couples together through thick and thin, their relationship at the start of the film is the kind that’s been spread too thin for too long, and has been fraying for a while already.

It’s an endless pattern. Somebody forgets to do the dishes, or offers a perceived slight. The other gets upset. They spar until somebody crosses a line, and the dialogue gets lost in a fugue of hurt feelings and anger. Eventually somebody makes a dumb joke, they part ways for a while, they smoke a little pot, and they grudgingly reset to neutral until the next time. It’s a cancerous pattern, and Lister-Jones’ screenplay wisely toes the line between allowing her and Pally’s exchanges to ring appropriately true and letting the film remain a comedy. Before it’s over, Band Aid arches even further into brutally human territory, a touch that lends it an unusual degree of candor for a relationship dramedy.

After the multifaceted stresses of a child’s birthday party with friends pushes them both to a joint in the upstairs bathroom, Ben and Anna start playing kid-size instruments in the backyard. It feels right. For a few minutes they’re both creative again, instead of feeling low about Ben’s dead-end graphic design career and Anna’s failed book deal. They remember how they still kind of like to be around each other, when the stresses of adulthood aren’t turning them into their worst selves. Soon they’ve recruited their eccentric neighbor Dave (Fred Armisen) to play drums, they’re looking into the local open-mics, and their relationship might have found an outlet for all of its unspoken truths.

However, Lister-Jones’ handle on the messy humanity of her protagonists is what distinguishes Band Aid from its high concept. Their problems are hardly solved just because the two came up with a semi-catchy song while eating pizza is in their garage, and the film is perceptive about how one’s excitement about rising out of failure can become its own kind of pain, if struck down prematurely. Their songs are appropriately amateurish, save for one solo number from Anna, and it’s an astute approach to the material. These aren’t closet rockstars waiting for their big push, they’re a married couple in freefall, trying to remember why they wanted to be married in the first place.

For as archly funny as much of the film is, largely owing to Pally and Lister-Jones’ embittered dueling, it’s strange how some of Band Aid’s less effective moments come when it goes after laughs in more obvious ways. While there’s some sweetness to Armisen’s socially maladjusted drummer, Dave ends up feeling like a transplant from a different and more conventional comedy than this one; in particular, a subplot about his sex addiction feels unusually mean-spirited in what’s otherwise a pretty empathetic movie. (It’s also broad in a way that feels at odds with the dopey vulnerability that Armisen brings to Dave in some of his later scenes, and for that matter, how Lister-Jones writes the character.) Band Aid seeks to reject clichés, in the sardonic voice of its over-it-all leads, but it occasionally slips into over-familiar territory all the same.

But there’s an earnestness to Lister-Jones’ film that even makes an exchange like “Failing makes you a failure”/”Failing makes you an artist” feel a shade more earned than it might have otherwise. There’s a fly-on-the-wall intimacy to scenes of its central couple eating mushrooms on the beach and giggling at nothingness together, or getting into the kind of argument that can only end in regrettable cruelty. There’s no linear path to being “okay,” or to overcoming grief, and Band Aid is ultimately as much about how people have to do these things on their own as it is about a couple doing it together. But playing some punky songs in your garage with somebody you love on the good days? That’s as solid a first step as any.