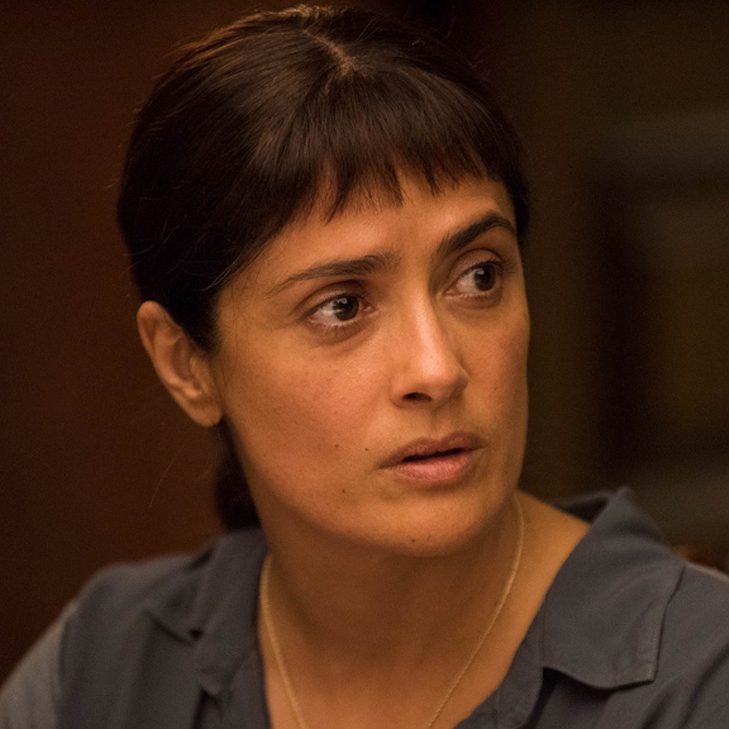 Being the odd seat out at a semi-formal dinner is one of the more physically uncomfortable experiences a person can have. Especially if they’re not the type who can walk into any room and win it over in seconds. You have to sit quietly, acutely aware of your disconnection from the rest of the table, waiting to be thrown the odd conversational life raft so that you can attempt to pretend you’re a part of the larger discussion. Yet it barrels by you, for the most part, discussions of things to which you have little or no connection dominating the night until, hopefully, it comes to a reasonably early end.

Beatriz (Salma Hayek) knows that she’s the odd seat at the meal central to Beatriz at Dinner even before the casual racism begins to flow. A holistic healer and massage therapist, Beatriz is about as purely, wholly empathetic as a person can be. She starts every conversation with a hug, to establish the boundaries of physical touch. She’s hurt in a genuine way by billowing smokestacks off in the distance, or a garish slick of oil marring the otherwise gorgeous vistas of the Pacific Ocean. From her work at an alt-medicine cancer center to her private in-home massages, Beatriz attempts to spread a little bit of natural light wherever she goes.

But her life isn’t exactly ideal. She’s long been displaced from her home in Mexico, one of her beloved pet goats was recently killed by an unknown neighbor for making too much noise, and she’s one of those people who does work that’s essential to human life but also devalued from a basic monetary standpoint. It doesn’t help that many of her clients are reminders of how far behind the curve Beatriz has found herself, chief among them Cathy (Connie Britton), a kind (if aloof) woman living in a multi-gated community. Beatriz once helped Cathy’s daughter survive cancer and the ensuing chemotherapy, so Cathy regards her as “part of the family,” and doesn’t even hesitate to invite her to stay for dinner when Beatriz’ car breaks down in the driveway after a session.

But being invited doesn’t automatically make a person welcome. The dinner in question happens to be a celebration of a major land development project overseen by Cathy’s husband Grant (David Warshofsky), who’s immediately cold on the idea of Beatriz sticking around. She meets Alex (Jay Duplass) and Shannon (Chloë Sevigny), a hungry young power couple, who can’t stop hijacking Beatriz’ small talk about elemental energies and personal healing to rave about their accomplishments. She tries to engage with the women at the party, but quickly realizes where she is amid a cliquish, nasty discussion about a reality star’s leaked nudes that ends in them being passed around the group. And in this kind of world, attempting to engage with the men is simply not something that’s done.

Yet one jumps out to her. Doug Strutt (John Lithgow) and his wife Jeana (Amy Landecker) arrive as the guests of honor, and Beatriz is convinced she recognizes Doug. Yet even if it’s not recognition in any formal sense, Beatriz has probably come across a fair number of men like him in her life, the blithely oblivious type who thinks nothing of insulting the other men at the party or demanding a drink from Beatriz. (“You were hovering, I just assumed you were part of the staff.”) Doug is a caricature, but a pointed one nevertheless, and Lithgow plays him as the sort of man who thinks nothing of bragging about his avoidance of the law over tenderloin and regales his social companions with tales of pseudo-legal African game hunting. There’s no shame in Doug’s heart, because the world tends to be built by and for men like Doug. As such, he’s hardly repentant about being who he is, as truly as he can be.

It doesn’t take long for Mike White’s screenplay to pit Beatriz against her new surroundings. Miguel Arteta’s film takes place almost entirely in and around Cathy and Grant’s home, and rarely has an immense SoCal mansion felt so claustrophobic. Beatriz at Dinner will be best appreciated by fans of cringe comedy in the extreme modes of Curb Your Enthusiasm or White’s dear, departed HBO series Enlightened. The film is so excruciating in its social discomfort after a while that even calling it a comedy feels deceitful; it’s a too-realistic study of what happens when the vapid social mores of the affluent are interrupted or challenged, and how far some will go to maintain those standards. Beatriz has no place in a world of empty conversations about mergers and acquisitions and ducked regulations. She wants to talk about her animals and about genuine human emotions, but there’s no place for either at this particular table. She has another glass of wine, and then another. And she can’t shake the feeling that she’s seen Doug before.

Arteta frames Hayek in intense, lingering close-ups throughout, isolating her from the rest of the group even as she’s physically present, gazing over Hayek as she peeks around corners and wanders through the long hallways like a misplaced ghost. Beatriz is the kind of film that will leave some viewers clawing for an escape, but Arteta immerses the viewer deeper by the scene, Beatriz always at the center as the unwitting carry-on. (One particularly lovely shot frames her against the group of wives, under-dressed and a conspicuous foot or so shorter than everyone else.) Even her broken-down car in the driveway feels like an interruption. If these juxtapositions are flagrantly obvious throughout, they’re effectively delivered to the point where the film keeps its focus where it should be: on Hayek’s commanding performance.

The actress is tasked with conveying so much of Beatriz’ inner life through silent discomfort, and Hayek does marvelous work with a largely internal performance. Yet as the night goes on, and Beatriz becomes less sober and increasingly outraged, Hayek gets to layer onto what could’ve been a one-note victim for the sake of the film’s pointed theses about privilege and discrimination. Beatriz is a sweet woman, but has her lines, and can only remain respectful for so long. When Cathy talks about Beatriz to the other wives as though she’s a charity case, or Doug casually brings her into the dinner conversation by asking if she came to America legally, Hayek captures the real hurt beneath the satire. Beatriz didn’t ask for any of this, but she’s absolutely going to get it anyway.

Beatriz at Dinner has an ear for the microaggressions that tend to constitute so much modern racism, and these moments tend to play better than the broader attempts at cultural commentary; when Beatriz declares of a particularly unsettling story that “I don’t think it’s funny, I think it’s fucking sick,” it puts an overly neat bow on the proceedings up to that point. The film is wholly sincere in its exhausted, despondent approach to the 1%, but that sincerity gets lost in some of its later scenes, particularly a miscalculated fake-out late in the proceedings that promises a bolder kind of ending before ultimately walking it back to disappointing effect. But that sincerity comes through best in Hayek’s performance, and in some of the better moments in White’s dialogue, when Beatriz at Dinner makes a melancholic version of the same case that Bill & Ted once did: be excellent to each other. Or there might be consequences.