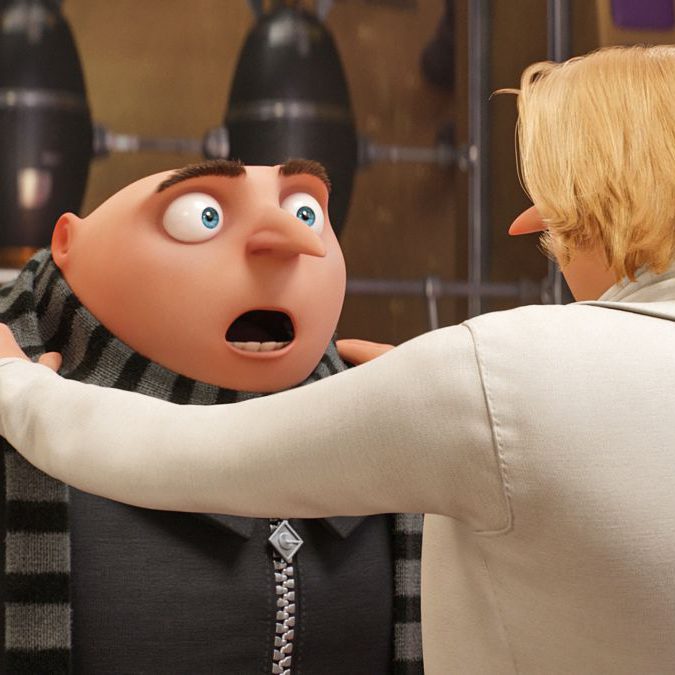 Despicable Me 3 swings, in spite of itself. It’s a comic whirl of music, and yes, it’s an NBC Universal product as well. But this is a snazzy new one all the same, with a decent joke ratio and a strange affability. When this thing’s not tinkering with new characters, over-threaded stories, and being an all-around parade of gags, this movie sneakily masters the art of the musical punchline. It’s hard to imagine Chuck Jones not finding the film’s Gilbert and Sullivan joke funny. This third installment isn’t too terrible. It’s not all that great, either. But you needn’t feel guilty if you prop your child in front of it while you do laundry or have some cabernet in the other room. After all, what are these films if not reasonable diversions? They’re also thunderously profitable diversions, but at least they’re harmless.

What’s new with Gru (Steve Carell)? Lots, actually. Running through Despicable Me 3’s plot is like tracking the Tasmanian devil, swirling about with onomatopoeia and half-thoughts spitting out in every direction. But here’s a stab at summarizing the many manic tales of Gru, former Telly Savalas supervillain and current married do-gooder with three adopted daughters. But wait ‘til you hear this: he now has a twin brother, Dru (also Carell). Newly discovered for this third film. Surprising, right? Not a clumsy sitcom-like device at all. Carell plays the feather-headed Dru at a high pitch, as Dru hugs and gushes and begs Gru for a chance to play in big crime. But Gru’s a changed man. He’s a domestic type now.

Or at least he was, until he’s fired from the Anti-Villain League, where he worked with his wife, Lucy (Kristen Wiig), who’s also let go. Gru gets the boot after repeatedly failing to apprehend Balthazar Bratt (Trey Parker), a former child star-turned-psychopath with plans to raise Los Angeles into outer space with his patented magic bubble gum that inflates, ensnares, and somehow turns air into helium – while never exploding inside one’s mouth. Bratt rocks a mullet, a handlebar mustache, dance moves to the tune of “Sussudio,” and a keytar that blasts clothes-stripping soundwaves. Now that’s comical supervillainy, folks.

What else? Oh, Lucy’s struggling to become a mom to her and Gru’s three kids. Nothing pertinent there. Margo (Miranda Cosgrove), the oldest daughter, is courted by some Milhouse-looking geek over a matter of soft cheese? It comes off like an unfinished idea. Also, little Agnes (Nev Scharrel) goes unicorn hunting in a fit of excitement. Look, you have to be somewhat odious to not knowingly smile at this subplot, so it gets a pass. Agnes is like a living ball of candy, the adventure is funny, and it has a terrific punchline. Things resolve neatly in the end. Some of the dramatic notes play like copies of the first film. Pharrell lays down tracks that might be big in 2018. Fun and profit all around.

Oh, you want a status update on the Minions™? They quit on Gru. They sing “Major-General.” They go to jail. Moving on.

What we’re left with is a series of gags, goofs, and jukebox sillies. Gru straps an old fogey to a rocket. Some no-name Minion wants a banana tattooed onto his butt. Look, that Minion’s holding a sign that says “WATZ FO LUNCH”. Another, “BLAMOC.” Anyway, it’s all fine. Really. It’s not a family film made with disparaging humor; directors Pierre Coffin and Kyle Balda (along with co-director Eric Guillon) favor antiquated references and sight gags. Despicable Me 3 never meets a pop song it won’t exploit, and while that may sound like snake oil, the comic timing is still impressive.

That previously mentioned “I Am the Very Model of a Modern Major-General” stunt with the Minions? They walk onto the set of a singing competition show (called SING!, ensuring that cross-promotion is in full effect), and in a panic, the lead Minion (his name’s Mel) starts blabbering along to the music. But the escalation of the bit is what works. The astonished judges. The audience on the verge of rapture. The Minions’ formation on stage, and the use of toilet paper as streamers. That, right there, is how you build a joke. All the musical choices help in that way. Michael Jackson’s “Bad” out-performs Bratt’s early heist scene by guiding the editing into something slick. Madonna, Dire Straits, Van Halen, a-Ha, andeven “99 Luftballoons” get good play. Of course, it’s commercially engineered to draw on comfort-zone familiarity, but it works within the film’s comic strengths.

A word on Bratt, however: he’s a diagnostically bitter creation, toxic nostalgia defined. (See the “member berries” sketch from South Park for another Parker-related example.) Bratt is a highly recognizable persona, so mad about losing the safety of his golden years that he clings to them in warped, abusive ways. If only Parker had any good lines to work with, beyond ironically bad zingers (“I’ve been a bad boy!” over and over, per the demands of catchphrase comedy). That’s what happens when you pull an R-rated artist and throw him at a PG. Still, Bratt’s an interesting study in throwback obsessions, in a film with fart jokes over the opening company logos. Who’d have thought?

Yes, Despicable Me 3  has those mumbling creatures, and Carrell keeps after his Lugosi shtick, and the little girls talk about memes in cloyingly button-cute ways. It’s all par for the mini-golf course. Yet there’s an undeniable rhythm to the movie, as nudging as it may be. Minions felt like a frenetic contract extension for Illumination, and Despicable Me 3 retains some of that feeling. But at least it slows the hell down. The laughs are back. Characters like Gru and Agnes remain likable. The Minions aren’t in every scene, and so the humming of their buzzy voices is less cumbersome. This is a mild return to franchise form, which is like saying that one of the descending plane’s jets started working again. Despicable? No. Deal-able? Sure.