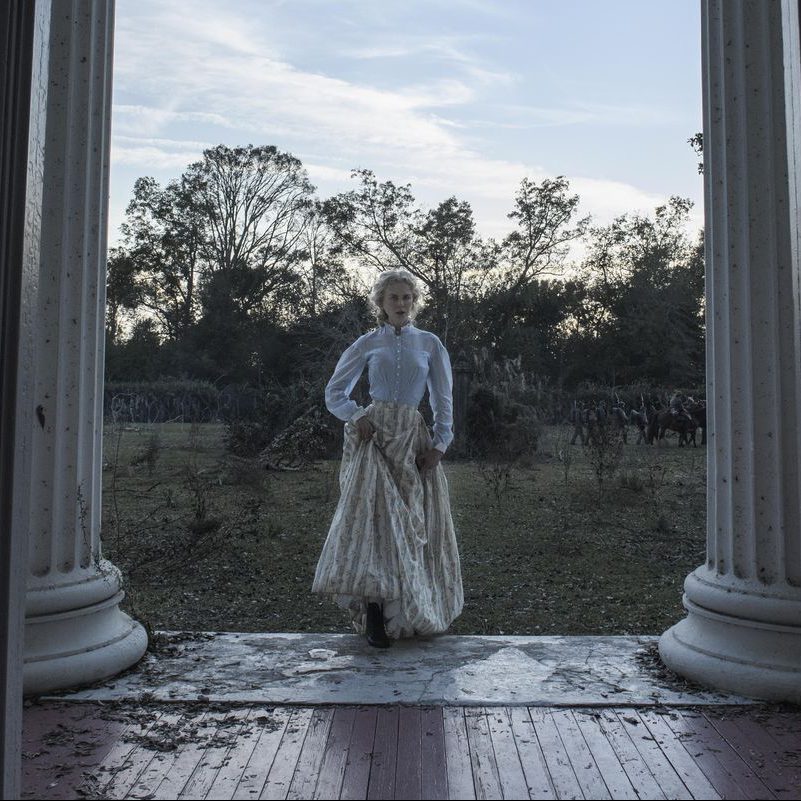 A young girl finds a grunting, sweating, bleeding man in the woods. She’s understandably terrified. Still, he’s mostly helpless, and she’s a good girl. If she leaves him there he’ll die, of fever, or thirst, or at the end of a Confederate rifle. So she brings him home. Eventually all hell breaks loose, and of course it does. It’s a simple enough concept: an unfamiliar creature enters a fixed ecosystem. A tenuous balance goes awry. But it’s not a zebra mussel, a cup of sea water, or a plague of locusts. On this occasion, the invader is a man, and he’s outnumbered.

Sofia Coppola’s graceful, festering film The Beguiled, a remake of sorts of the 1971 Clint Eastwood vehicle of the same name, doesn’t make anything particularly easy on its audience. Still, no adversity faced by those watching this darkly comic story unfold can hold a candle to what John McBurney (Colin Farrell) endures. Young Amy (a scene-stealing Oona Laurence) brings him home to a school for girls, once thriving and now a bit of a ghost town — understandable, as the advancing Union army is practically stomping through their backyard. The school runs under the watchful eye of the well-mannered Martha Farnsworth (Nicole Kidman) and the put-upon young teacher Edwina (Kirsten Dunst), for whom the charismatic McBurney turns on the charm. His presence exacerbates the rising tensions in the house — those created by fear, resentment, class, age, and forced proximity — one small smile at a time. As Martha, Edwina, the sly student Alicia (Elle Fanning) and her classmates circle around him, things get weird, and then get weirder, and soon McBurney’s only source of power becomes a major liability.

The power in question is all that comes with being a man in a world built for men. To be specific, it’s the power of being a white man, but with the words “The slaves left,” Coppola dismisses that particular American institution from her film. This inherent power of McBurney’s, frankly played by Farrell, dominates much of the film’s first half. The ripples it creates in the household play out without comment, from McBurney’s obvious relief at stumbling into what seems a plum situation for him, to the softly fraying civility that keeps these young women from each other’s throats no matter how stir-crazy they may feel. Yet the greatest source of power and tension doesn’t need to be hinted at or teased out. It’s apparent from the moment that Farrell’s bloodied, unconscious body is laid out in the yellowing music room. On the one hand there’s fading wallpaper, fragile lace, and pristine-but-thinning white linens. On the other is a heavy figure, smelling of sweat, blood, and gunpowder.

Coppola and her actors wield the sensibilities and constructs of masculinity and femininity like razors, making gender as impossible to ignore as the cannons firing just a few fields over. A curtsy is never just a curtsy, nor are a pair of earrings just a simple adornment. In this world, women are defined by their relationships to men. The rules may have changed since the Civil War, but as it turns out, women today are still expected to dress, behave, and smile (always smile) to satisfy men. A dress is worn, and how it looks and feels to the wearer is irrelevant.

It’s from all that gender implies that Coppola finds much of the film’s unexpectedly sharp humor; who knew Fanning simply draping her skirt across a chair could draw such earthy chuckles? Coppola makes the games these people are playing as transparent as a gauzy lace curtain across a window, as though Martha, McBurney, and the rest all know the script but aren’t particularly good at delivering their lines. Each movement feels oddly rehearsed — a dinner scene in particular plays as though everyone involved practiced in the mirror beforehand, and while each nod of the head and raised glass is perfectly controlled, the eyes are sharp, watching to see who goes off-script first. The exception would be Edwina, whom Dunst imbues with a weary hopelessness that renders her incapable of resisting even the most tin-eared of McBurney’s ploys.

It’s when the players go off-script that things get really messy, building to a grotesque, gothic finale every bit as sweaty and bloody as McBurney is when he’s first found. All that faded elegance somehow becomes both garish and fragile, aided by the terrific score from Phoenix, as inspired by Monteverdi. Sound becomes important in other ways as well — if nothing else, foley mixer Pietu Korhonen and foley artist Heikki Kossi are responsible for two of the most distinctive, gruesome, and in one case, blackly funny sound effects of the year. And theirs isn’t the only production element to play a major role in the final, fantastic act of The Beguiled, with the costume design, production design, and some remarkable makeup effects stepping up to the plate to bring this dark little sucker home. To say too much about the events is to spoil the film’s pleasures, but suffice it to say that all the aforementioned elements collide in one particularly sharp scene, in which a pair of disreputable pants say nearly as much as the looming white walls.

Still, the lion’s share of the credit must go to Coppola, who turns her predilection for understatement and delicacy into something quietly savage. The Beguiled isn’t a mystery — much of what happens seems inevitable, in fact — and yet it exists as a sort glass-spun puzzle box, something fragile yet terribly precise. Each mirrored shot, each repeated motif, each “Chekhov’s gun” moment (here cleverly subverted to something seemingly harmless, yet just as violent) feels preordained, cyclical, and unavoidable. All this has happened before, the film seems to say, and all this will happen again. And yet, how could it? This isn’t a story of everyday life, nor is it the kind of epic that one sees again and again over the course of a life. This is one sweaty week in a world on the brink of collapse, where the chaos just a few fields over is both utterly removed from and an echo of the chaos inside that big, white house.

There’s grace to be found in The Beguiled, and delicacy, but what’s most interesting is the brutality and power that seethe beneath the surface. Beneath the lace and latticework, you’ll find muscle and bone, sinew and gristle, bile and blood. Soft curves conceal sharp edges. Gentle mouths hide sharp teeth. And beneath everything that’s beautiful — and The Beguiled is certainly that — something savage and splendid breathes.