The UK politician has a message for Trump: "Build bridges, not walls" 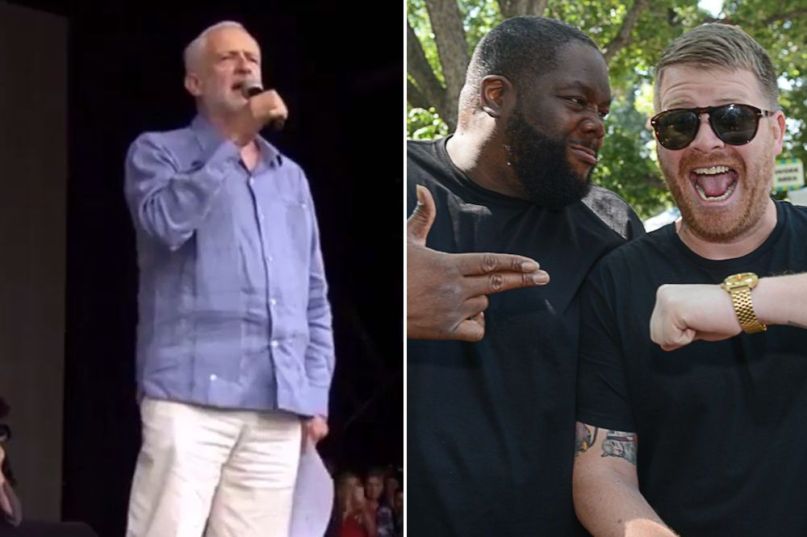 During the 2016 US election, Run the Jewels rapper Killer Mike was a vocal proponent of Bernie Sanders, and the Democratic presidential candidate returned the favor by introducing the group at Coachella. Now it’s 2017 and unfortunately, Donald Trump is the US President, but Mike has found a new politician to champion in Labour Party leader Jeremy Corbyn. It turns out Glastonbury Festival founder Michael Eavis is a fan of Corbyn as well, so they put two and two together to bring out the politician before RTJ’s set.

During Corbyn’s speech, he pointed at the festival surrounding wall and emphasized its message for Trump: “Build bridges, not walls.” Following the introduction, Run the Jewels opened up their set by dedicating the performance to the victims of the tragic Grenfell Tower fire, stating “We love you, we love, you, we love you.” It was a particularly emotional show for Mike, who lost his mother just a few days ago.

Watch an excerpt of Corbyn’s introduction via fan-shot footage below.

"None of our freedoms were handed down to us by those in power " The best of Jeremy Corbyn's #Glastonbury set, part 2. pic.twitter.com/MIytRMoXjN

"This is dedicated to those people who perished at Grenfell." @RunJewels pay tribute to the #GrenfellTower victims ????#Glastonbury2017 pic.twitter.com/DDHu5UAz7n

Thank you #Glastonbury for inviting me to speak on the Pyramid Stage about how, together, we can build a country #ForTheMany, not the few. pic.twitter.com/vutOyFsFSo

Run the Jewels continue to enhance their reputation as one of the most tireless touring acts around. Following upcoming festival dates at Chicago’s Lollapalooza Festival, Philadelphia’s Made in America Festival, and New York’s Meadows Music & Arts Festival, the dynamic duo will continue to tour the US and play a few European gigs. Find their complete itinerary here.