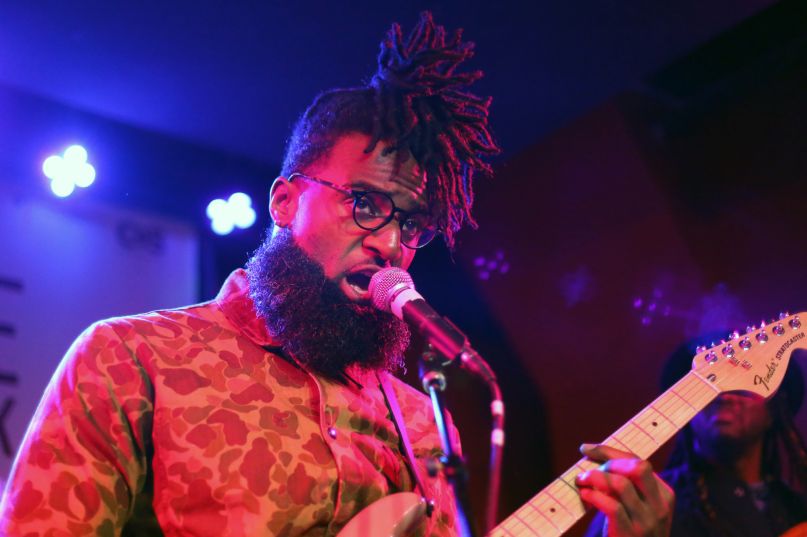 When I spoke with Reeperbahn Festival founder Alex Schulz, he said that the festival captures its lineup with 90-95 percent of artists who are relatively unknown, but have the potential to make it big. At the Hamburg festival’s NYC showcase at Pianos, as part of A2IM Indie Week, its seven-artist bill definitely highlighted talent who could be gems for early afternoon festival sets in the near future.

Carnival Youth perfectly exemplified this, with their breezy, summer-ready sound. In the main room, the Latvian rockers conjured up good vibes with the piano-driven “Never Have Enough”. With three members who alternated vocals (guitarist Edgar Kaupers, drummer Emīls Kaupers, and keyboardist Roberts Vanags), Carnival Youth were able to vary their sound and harmonize, like on the soaring “Octopus” and rollicking closer “Surf”.

After Carnival Youth bid farewell, attention shifted upstairs to the second stage in the lounge. With a two-stage setup, the music literally never stopped from start to finish at Pianos – a blessing for those who grow impatient while waiting between sets. Armed with just an acoustic guitar and his voice, We Bless This Mess took the stage there. But the nearby bar proved to be quite distracting for the singer-songwriter’s set. The Portuguese musician tried to brush it off, diving into “Silence” (which, contrary to its name, was quite the spirited number). His gripes were fair with such a minimalist setup, since it was easy to get drowned out by the surrounding chatter. We Bless This Mess tore through punk-infused folk ballads like “Joy” and “June”. Eventually, his frustrations boiled over, though, with the singer asking, “Can we fucking stop talking? Is that alright?” before closer “Darling”. Despite some angsty songs earlier in the set, the final track ended up being an optimistic stunner, with the singer crooning about hope and the preciousness of living in the moment.

Next up, synth-pop outfit Leyya took the stage in the main space. The cascading sitar intro of “Zoo”, their defiant recent single, entranced the audience from the get-go. Vocalist Sophie Lindinger bounced through pulsing cuts like “I Want You” and “Worthy”.  The dreamy Austrian outfit had a bit more of a hard rock edge live, with guitarist Marco Kleebauer delivering a punchy riff as the sturdy backbone for final track “Butter”.

The music then made its way upstairs again for Lydmor’s dazzling set. The Danish singer-producer proved to be one of the boldest, most fearless performers of the evening. Surrounding herself with four slender neon columns, Lydmor prepared a minimalist, low-light rig. Behind her console, the singer unleashed hypnotic dance moves in a style reminiscent of Grimes or Lorde. Impressively, Lydmor proceeded to break down the boundaries of the stage, sauntering through the crowd and crooning literally inches away from the enraptured audience. Whether it was singing underneath a pulsing blacklight – revealing intricate body paint – or dancing atop tables, the vocalist enchanted the audience with throbbing cuts like “Drugs in My Pocket” and “New Cars and Babies”.

Back in the main room, Albin Lee Meldau took the stage for what seemed to be the most anticipated set of the evening, with fans cheering the Swedish outfit on from the very beginning. Meldau, who took home the 2016 Anchor Award at Reeperbahn (“an award that recognizes promising, international talents on the music scene”), proved why he’s such a show-stopping singer right from opener “Let Me Go”. Whether it was “Lou Lou” or “Lovers”, Meldau’s rich, sonorous voice carried through the packed room.

Upstairs, Megan Bonnell emerged in the lounge. The Canadian singer-songwriter effortlessly shifted between piano and acoustic guitar on her gently bubbling tracks. The Toronto vocalist sang through beautiful songs from album Magnolia, like “Can’t Have You” and “The Wind”, highlighted by her effervescent voice.

Finally, Olivier St. Louis were tasked with bringing the evening to a close. Just as the energy level of the night seemed to be winding down, the engaging quartet busted through with a rousing mix of funk and soul. “Ain’t Cool” got the crowd moving early, and the funky outfit even covered Thundercat’s “Them Changes” with his bassist rocking a six-string. The highlight of the set came during a call-and-response of the band’s penultimate jam.