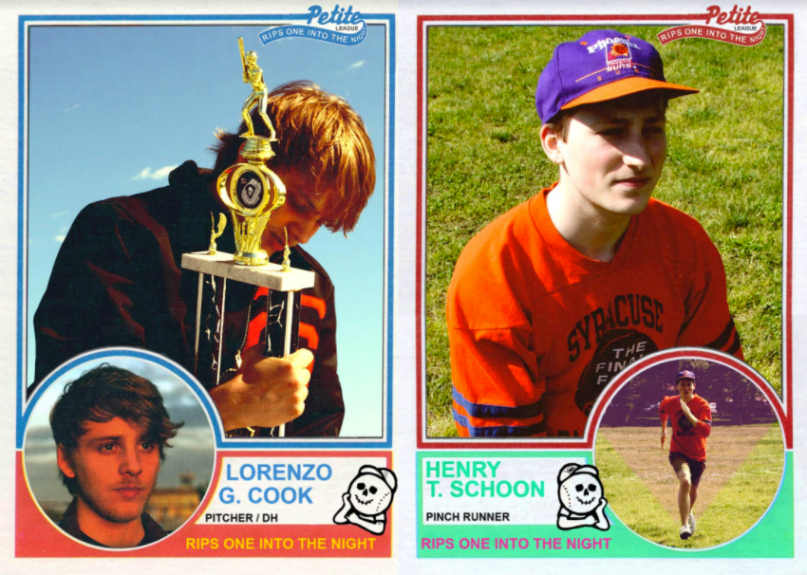 Petite League have been making the most of their cheeky baseball-referencing aesthetic since their beginnings 2014. Their first album was named Slugger, and they followed that up with No Hitter last June. Now, the New York lo-fi duo are calling their shot and aiming for the fences with their upcoming third full-length, Rips One Into the Night.

The theme even carries over to the band’s lyrics, as freshly premiered single “Sun Dogs” demonstrates. “Oh now now now i’m alone in the outfield/ Oh dear my dear, deer in the headlights with sun in eyes,” sings frontman Lorenzo Gillis Cook. “No easy pop flies tonight, we’re all going out for a good time till she says/ Always doesn’t always mean forever.”

Don’t get yourself too caught up in all the nods to the great American pastime, however. Petite League’s fuzzy style of indie is well worth your attention. “Sun Dogs” in particular shimmers and shimmies like a jangly, stripped and scuzzed The Strokes. The track plays between bobbing choruses and scratchy, alluring bridges, a mix that’s as catchy as it is heartfelt.

Lorenzo explains the song’s origin to Consequence of Sound:

“Right before we left for SXSW, I was in a pretty vicious cycle of writer’s block. I was a little nervous because almost everything I was coming up with was pretty noticeably underwhelming compared to the other stuff we’d put out on the other records. After being gone for almost two weeks I started writing, and had half of ‘Sun Dogs’ done my first night back. It was the kind of New York spirited song I was hoping I’d come up before we left. I guess it took going to Texas and back to bring it out.”

Take a listen to “Sun Dogs” below.

Rips One Into the Night September 1st via The Native Sound and Scarier Dome.

Rips One Into the Night Album Artwork: