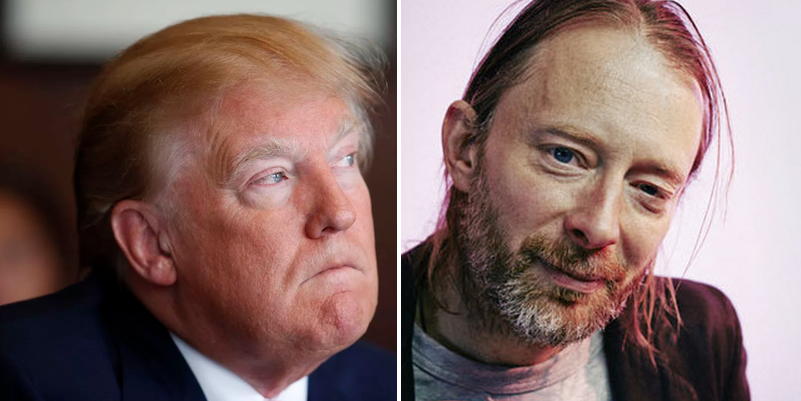 The world has reacted swiftly to the decision of our Numbskull in Chief to pull out of the Paris climate agreement. Cities and states across the country have pledged to meet their obligations under the accord regardless of what 45 thinks is best. Tesla’s Elon Musk and Disney’s Bob Iger each individually decided to leave POTUS’ business advisory council — ya know, because he didn’t take their advice. Even musicians have spoken out against the shortsighted decision to leave the Earth-first deal.

Radiohead frontman Thom Yorke led the charge, posting an image of an upside down emoji with the simple caption “Fucking clown” while linking to an article denouncing Drumpf’s decision. As a longtime environmental advocate and supporter of Green Peace, Yorke’s comments shouldn’t come as much of a surprise.

Other musicians were a bit more blunt with their criticism. John Legend called Trump “our national embarrassment.” Thor Harris, formerly of Swans, lamented the fact that Fuckface von Clownstick “decided American won’t be part of Earth anymore. Bummer.” Green Day’s Billie Joe Armstrong wrote a message from the planet’s perspective symbolically firing the Celebrity Dementous. Our Canadian friend Grimes tried to highlight a positive discussion about the climate decision, while reminding everyone that “pollution haze makes for very flattering lighting.”

Read their messages and more below.

Trump is our national embarrassment.

We have to stop this asshole. This is urgent. You have to vote in 2018.

dem or republican this climate issue is awful. trump is truly an idiot that is harming all of us

i'm trying to figure out the meaning of backing out the #ParisAgreement ???? https://t.co/yLon2vdf4x