Top Songs of the Month: Vince Staples, The War on Drugs, and Lorde 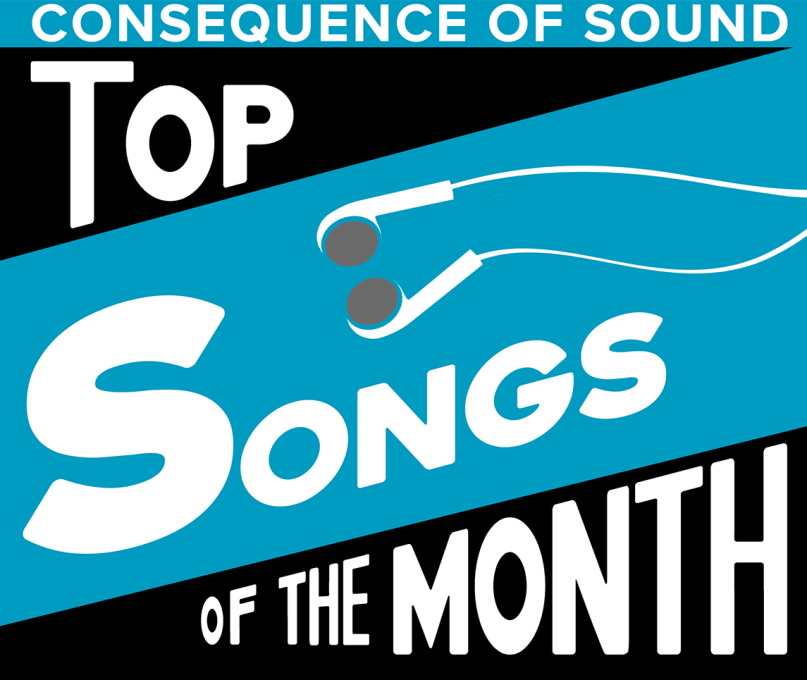 It’s probably just a coincidence that three of our 10 favorite songs from June premiered on the same day, the very first day of the month. It kicked off a calendar page that offered album announcements from cornerstone acts like Foo Fighters and Queens of the Stone Age, that saw Halsey and Katy Perry become the first two women to top the Billboard 200 in 2017, and that featured new album drops from Phoenix and Fleet Foxes.

It’s not that those artists didn’t have entries worthy of our monthly wrap-up (well, except for Perry). It just speaks to how strong of a month June was that cuts like “J-Boy” from Phoenix or “Run” from Foo Fighters had to be left off the list. Also notable was a surprising return to form from Iron & Wine with “Call It Dreaming”, DJDS continuing to elbow their way into mainstream consideration with “Trees on Fire”, most everything from the Lorde and Vince Staples albums, and a trio of Radiohead tracks that have remained dormant for two decades.

What we did settle on was a pair of Atlanta rappers striking gold in collaboration, a standout track off the debut LP from TDE’s first lady, a former Vampire Weekend member shining in technicolor, and our favorite sister act doing their best to honor the memory of the Miami Sound Machine. Plus, you know, those three songs that kicked off June 2017 to be a quite memorable month for music.

Just as we’re officially toe-dipping into summer, the promise of a new Alvvays record in early September almost makes it tempting, if we could, to hit the fast-forward button past our favorite season. That’s just how refreshing the self-titled debut from the Canadian indie pop contingent sounded back in 2014 — the band confident in being a straightforward jangle pop outfit that leaned on killer melodies and songwriter Molly Rankin’s twentysomething relationship dilemmas. Luckily, sneak peeks found in setlists and new single “In Undertow” suggest a band that have continued to hone their craft without losing what we fell in love with the first time around. This bold, glistening single brushes by like the song’s metaphorical wave, the accompanying warm and soothing breeze belying a relationship crashing against the rocks and about to be pulled under. While we’ll no doubt be sad to see our August calendar pages get torn off, at least we know some irresistable breaking up awaits us in September. We’ll be tanned and ready. –Matt Melis

Only in hip-hop can an artist make a solo debut after having dropped four full-lengths over the past two years. But rather than enter into the mixtape vs. album debate, let’s just say all those releases instilled a wisdom in Young Thug that a lot of old thugs would envy. Known for his prolificacy, improvisation, and unorthodox rapping style, “Relationship”, off the freshly dropped Beautiful Thugger Girls, sees Thug further squash a past Twitter beef by trading couplets and croons with fellow Atlantan Future. And, sure, the two do spend a good portion of the track vying for the title of MUMC (Most Unintelligible MC), but damn do they know their way around that R&B backing. It’s a song that’s going to make a lot of people — male, female, doesn’t matter — feel like a No. 1 baby all summer long. –Matt Melis
__________________________________________________________

There’s nothing particularly revelatory about “Homemade Dynamite” — at least not lyrically. Like so many anthems that have come to define her generation, the third track off Melodrama is a three-minute Remember When on a rule-breaking night that everyone “kind of” remembers. Yet, what elevates it over similar fare is the mood. Because this is Lorde, and her voice doesn’t exactly scream for balloons or confetti, she never sounds anything beyond mildly entertained, which in itself says so much about an era of youth that has every reason to feel either nihilistic or nonplussed. The way she’s surrounded by bruising rhythms — basically, an angsty mix of Genesis, Todd Terje, and Drake — adds to the ensuing feeling that we’re experiencing this in the immediate aftermath. It’s like that late-night ride home on the train when you start wondering if you should maybe get off at an earlier stop in the hopes that there might be something else going on elsewhere. Of course, it’s a fleeting moment. –Michael Roffman
__________________________________________________________

You definitely didn’t need a video of SZA in lingerie, Travis Scott tied to a bed, and the two getting handsy to feel the smooth sexiness of “Love Galore”, but it certainly doesn’t hurt. Anticipation had been building for SZA’s debut for years, the TDE signee always on a short list of R&B megastars on the come-up. And while lead single “Drew Barrymore” was a jam, it wasn’t the sexy grown-up R&B that might have been expected. “Love Galore” is that and more. The minimal-sounding yet maximally groovy tune feels sultry, but deals with the complexities of bad affairs, craving an ex, and fulfillment. SZA’s excellent debut LP, Ctrl, is out now via RCA Records.–Lior Phillips
__________________________________________________________

When HAIM started previewing their sophomore LP last summer at festivals across the world, the response was surprisingly tepid. Unlike their past hits, which spent years on stage, there wasn’t an impetus to revisit these new recordings while they returned to the studio. Now that they’ve spent some time tinkering with the material, a song like “Little of Your Love”, one of the two tracks they had dropped, refuses to leave our ears. Maybe it’s because HAIM are at their best when everyone’s involved vocally or that we like our HAIM a little on the rock and roll side or that it’s just a straight-up addicting summer jam … there are many reasons. But really, it’s mostly because it just feels good. It’s like … well, you know how THC is often extracted from weed to make fun things like pot brownies and pot tea? Yeah, it’s like that, only the weed is maybe an ’80s pop rock compilation and the THC is whatever brilliant energy fuels this little pot brownie of a song…

With a steady stream of gorgeous singles released over the last couple years, it’s fitting that Rostam throws a curveball for his album-announcing track. “Bike Dream” loses the lush orchestration and shady hammock melodies that he perfected with Vampire Weekend and seemed focused on with previous solo offerings. In its stead are throbbing keyboard, an uptempo rhythm, and a general sense of controlled chaos. For its verse, Rostam fills a space that can barely contain his words, racing to get the thoughts out before the next chorus strikes. There’s something inherently light and joyful about it all that not only brings balance to the previous offerings from the new solo artist, but entices us to hear the breadth of what his debut album has to offer. If singles are meant to whet the appetite for the main course while also standing firmly on their own, “Bike Dream” is expertly chosen and remarkably effective. –Philip Cosores
__________________________________________________________

Going forward, the best thing that The War on Drugs can do is to keep moving us. It doesn’t matter if the song’s catchy, if there’s a lyrical melody, or if there’s a particularly memorable guitar part. Those things don’t matter in the long run. What matters is a song that hits hard, that doesn’t just leave a mark but sticks with us. That’s why 2014’s Lost in the Dream is still such a stunner, because there isn’t a song off that record that doesn’t haunt us in all the right ways. Currently, they’re two-for-two in that category with their followup, A Deeper Understanding, having already blown us away with their sprawling 11-minute epic, “Thinking of a Place”, and now with their affecting single “Holding On”.

Sprinkled with all sorts of Springsteenian magic — those fucking bells are like every holiday season wrapped into one — and wired with teary guitar lines — god help me during those choruses — the song spends nearly six minutes fucking with your emotions … and it’s delightful. Singer-songwriter Adam Granduciel sounds like Mark Knopfler jogging in space, keeping us at a pace that’s never too brisk and never too snooze-y. For added effect, watch the video above, which stars the ever-wonderful Frankie Faison in a beautiful portrait of mortality. There will be tears. –Michael Roffman

Lorde has a realization so solid she only needs to sing it once. “Are you lost enough?” she asks with fervor fierce enough that you know she doesn’t want an answer from you, goddamnit. Synth lines leaning near the edge of the mountaintop, a symphonic glow erupts as though removed from the boundaries of the pressurized world below. In knowing how lonely it is to remain unphased by the real world, fetishizing lost feeling is a new kind of fire. It means we’re searching; we’ve cut our hearts open to make space for life to happen, to dive into the unknown with perfect bewilderment. Lost! Sure. The real question is … enough?

One drum note, sticky enough to grow and sustain, turns into an auspicious pitch hovering in the foreground. That’s when Lorde’s gorgeously volatile voice breaks across the now howling beat — “Now I can’t stand to be alone” — a personal proclamation fighting its way through the commotion. She commands it all, her words potent enough to hold the noise at bay merely by accepting her wandering. Lorde’s work often wrestles, subtly and overtly, with purpose, trying to conquer a sense of self and find a place for it. “Perfect Places” is a powerful moment of transparency in that search. It’s an unashamed empathy for the lost, the desperate, the empty, and the lonely.–Lior Phillips

Big Fish Theory is not a features-heavy album. Sure, there are appearances from the likes of Damon Albarn and ASAP Rocky and production assists from artists as diverse as Jimmy Edgar and Justin Vernon, but the focus rarely shifts from Vince Staples’ vision and voice. Any guests are present to aid and enhance his masterpiece, not there for the frivolous cosign. This might be most true on the record’s most star-studded track, “Yeah Right”. Over futuristic, tinny beats credited to disparate electronic stars Sophie and Flume, the song also gets a mid-stride verse from Kendrick Lamar.

I know, I know, Kendrick features are common enough it’s like they’re given away with record deals like bobbleheads at the ballpark. But this one takes a speeding car into an unheard of sixth gear, building off a grounding melody from Kučka and solidifying the song as a genuine anthem. It’s the logical next step after Yeezus, taking some of electronic music’s most interesting contemporary beat makers out of the LED glow and into the shadows. If it sounds a little scary, don’t worry. It’s just the future that you’re hearing creeping up behind you. –Philip Cosores