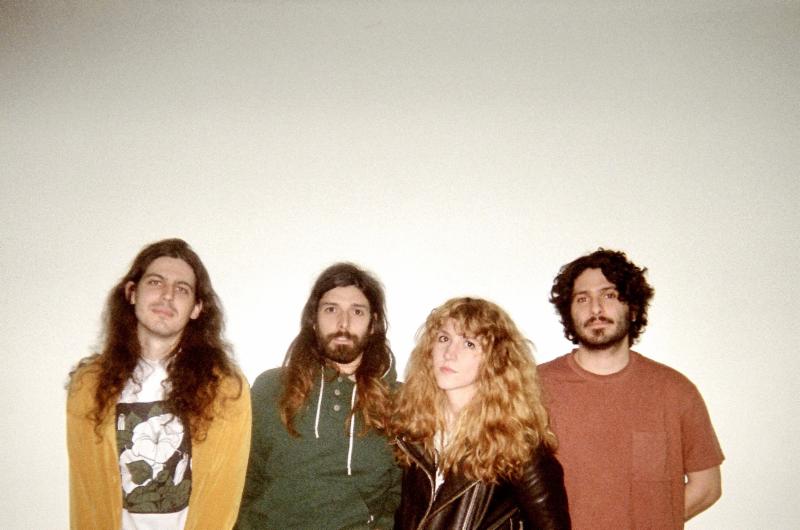 As social media begins to seep into every nook and cranny of our daily thoughts and reflexes, artists have come to grapple with that impact, weighing whether its promise of connection carries with it an unsustainable mental strain. Such is the theme of Widowspeak’s latest, “Dog”, the first single from Expect the Best, their follow-up album to 2015’s All Yours.

In the dim, moody video, Molly Hamilton projects yearning, melancholy vocals against a wash of sterile, technicolor lights as a smartphone glows in her hand, a device that works against the simple desire for one to just “stay.” Watch it below.

Hamilton told NPR the song is “about the compulsion to move on from things and places, even people, when you’re not necessarily ready to. Sometimes, I get caught up in ‘the grass is always greener’ mentalities, or cling to an idea that ‘I’d be happy if…’ and then make a drastic change. Then, inevitably, I feel restless a few months later and it starts again.”

She continues, “It also addresses how I look at social media, I think it will help me feel connected to people I used to see more, but I end up feeling lonelier, like I’m missing out on a sense of contentedness that comes with staying put or at least committing to a particular direction. So it’s not literally about my dog so much as the way a dog might think about its home — not overthinking the next move, geographic or mental.”

A press release describes Expect the Best as the band’s “heaviest album to date, “with echoes of Pacific Northwest grunge rippling throughout the album’s nine tracks. The weightier sound may be attributed to the fact that the band folded its touring members into the band’s creative process, which was once reserved for Hamilton and lead guitarist Robert Earl Thomas. Kevin MacMahon (Swans, Real Estate) produced the record.

Hamilton’s statement about the album reflects the themes of “Dog”. “In the past I’ve felt compelled to write songs that are more optimistic than I’m actually feeling,” she says. “As if I could make it true, as if everything in the past was significant or beautiful in a way, even if it was painful. But the truth is that not everything makes sense, and not every day of your life is an experience of clear cut emotional clarity. I struggle with this compulsion to pull away from people, pull away from the things I enjoy doing, and sometimes literally picking up and moving away when I am feeling uneasy and anxious about my future in a given space, physical or mental. Social media these days can exacerbate that as well.”

Expect The Best arrives on August 25th via Captured Tracks. See the tracklist and album artwork below, as well as the band’s fall tour itinerary.