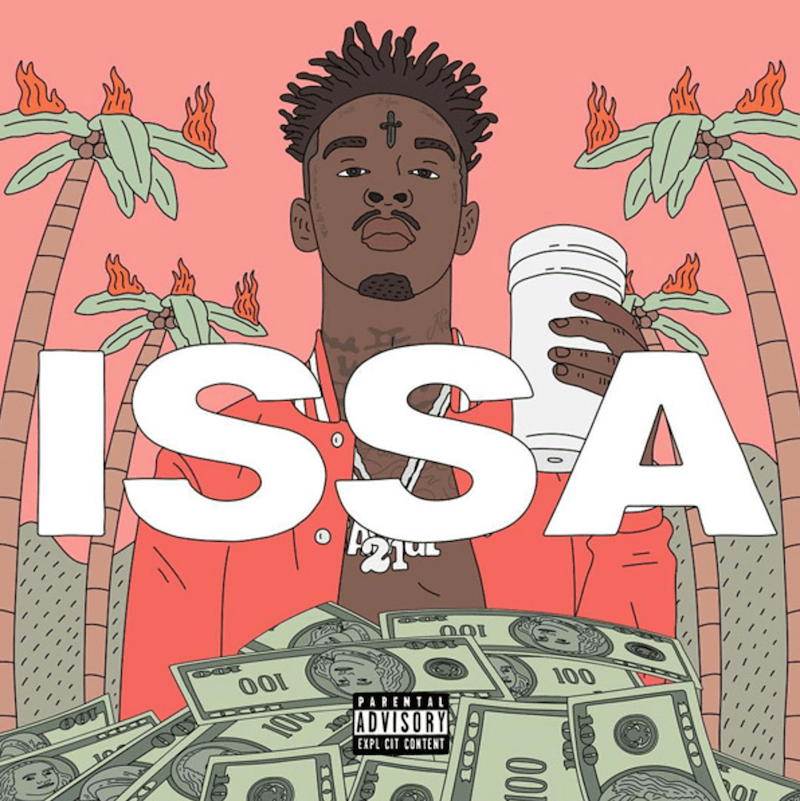 Issa Album is a party hosted by 21 Savage, but it’s Metro Boomin who brought the booze and snacks. Born Leland Wayne, Metro Boomin is the 23-year-old producer whose melodic, menacing beats have been marching up the charts long before he could legally drink. He first gained notice for “Tuesday”, the 2014 single by ILoveMakonnen, who had never had a hit before and hasn’t had one since. Since then, he’s collaborated with Drake and Kanye, hit No. 1 with Migos for “Bad and Boujee”, and has turned heads assisting Future on “Jumpman”, “Mask Off”, and nearly 30 other songs together over the last four years. In 2016, he teamed up with the other Atlanta emcee 21 Savage for the platinum-selling, nine-track EP, Savage Mode.

The two work well together, although that shouldn’t be surprising, since Metro Boomin had shown he could work with Future, and 21 Savage sounds exactly like Future. True, his voice is high and piercing, where Future’s is smoky and low, and there are other Atlanta influences (see: Gucci Mane), but in 21 Savage’s spacey phrasing, his judicial use of autotune, and his lyrics chockfull of thugs and drugs, one can plainly hear the influence of Future. The would-be master and apprentice even teamed up for 21 Savage’s first single off Savage Mode, “X”, where Metro Boomin lays out a darkly cinematic beat.

Now comes 21 Savage’s first full-length debut, Issa Album, and Metro Boomin supplies almost as many tracks as last time: eight out of the total 14. The rest is rounded out by other frequent Future collaborators, including Southside, Cubeatz, and Zaytoven. Naturally, the beats are excellent across the board, although 21 Savage uses a little more Autotune and makes more of a play for the pop charts with some slinky R&B jams.

“I’m too drunk to text so can we FaceTime,” he slurs on “FaceTime”, an admittedly catchy ode to late-night drunken chats. It’s charming in a sloppy way, and when he starts intoning, “We can get drunk all weekend!” you might find yourself daydreaming how nice that would be. But that’s the thing, his lyrics tend to be more catchy than memorable; the kind where you chant along with the radio and then forget what you were chanting. Take “Bank Account”, for instance, where he drawls: “I’ve got 1-2-3-4-5-6-7-8 M’s in my bank account.” Rest assured, you’ll happily count along like a kid watching Sesame Street, only there’s no lesson or nugget of truth to take away.

Lyrically, 21 Savage is obsessed with his own success, and that’s not necessarily a bad thing. After all, the “Admire me! I’m a rich, fearsome warrior!” trope goes back to medieval times and Beowulf, but on Issa Album, there’s little wit or humor to any of the offerings, just long lists that come off like a well-kept inventory of his personal closet. And whereas some artists find a single, poetic idea to carry from song to song across their album, for 21 Savage, the most consistent topic is a Yves Saint Laurent jacket. No kidding: By our count, the jacket itself appears twice and the Saint Laurent brand appears two more times. Is this interesting to listen to? That depends on how interesting you find the topic of men’s outerwear.

Instead, he’s better off as a sad bastard, as is the case on “Numb”, where he moans, “Numb the pain with the money,” over and over again in a rather nihilistic pattern.  Or on “Nothin New”, where he flashes a wider consciousness as he examines the social phenomenon of violence: “Another nigga made the news,” he shrugs, “It ain’t nothin new.” Unfortunately, these reflective moments are outnumbered by repetitive odes to getting high, getting laid, and getting lots of money. What’s worse, some of his lyrics aren’t just bland, but blatantly homophobic. On “Close My Eyes”, he offers up this stomach-churning sentiment: “Feel like I’m the last real rapper ‘cause these niggas weird/ Nah these niggas queers (gay) sippin’ Act, cheers (gay).” To be fair, nobody’s going to confuse 21 Savage with Mother Theresa — he named himself “Savage”, after all — and like all villains, his willingness to embrace the dark eerily gives him a certain charisma. It’s brave, if not particularly clever.

For all its flaws, Issa Album can be quite a lot of fun. Credit goes to 21 Savage’s sense for simple hooks; the easy way he slides into the pocket of the beat. But perhaps even more credit is due to the beatmakers, especially Metro Boomin, whose music has such large pockets for Savage to slide into. Metro Boomin is responsible for most of the sublime moments on Issa Album: the keyboards on “Close Your Eyes” which are simultaneously lovely and distorted, like a flower in a funhouse mirror; the way “Thug Life” layers chipmunk-soul over stuttering drums; and the melancholy piano on “Numb” thats gives such an epic scope to Savage’s howls and moans. These moments keep the album interesting, even after the emcee has run out of things to say.