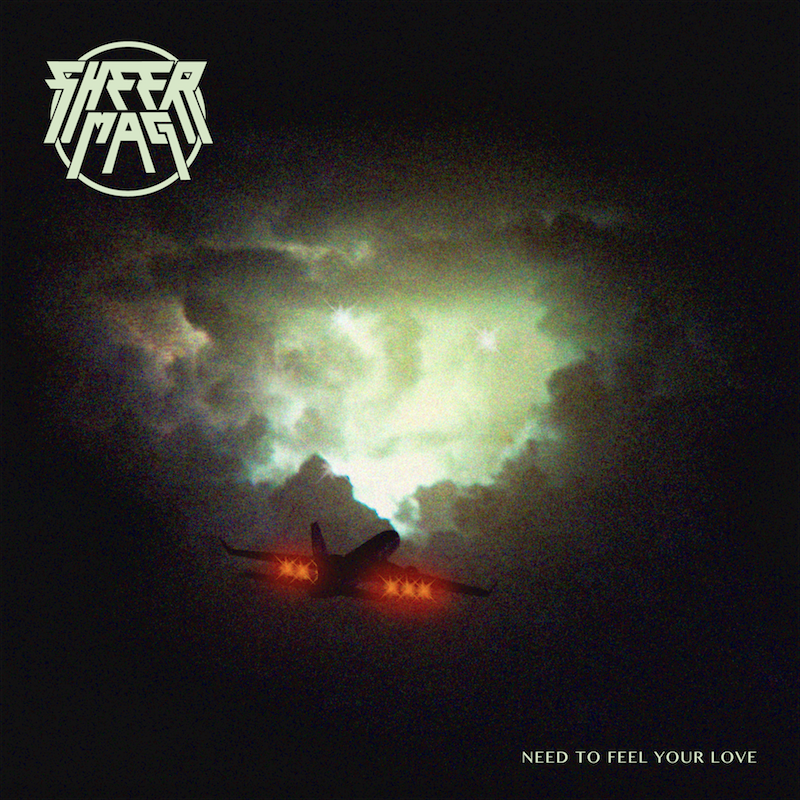 Earlier this year, a video made the rounds of Sheer Mag playing Shania Twain’s “Man! I Feel Like A Woman” at a wedding in North Carolina. Alongside a group of friends dancing along, the Philly five-piece tore through a faithful rendition of the ‘90s pop smash without a trace of irony. The performance captured the band’s earnest demeanor and excitement, serving as an example of how they warmed the hearts of punk and hardcore audiences in the underground circuit over the past three years. Led by Thin Lizzy-inspired riffs and the tremendous voice of singer Tina Halladay, who could have been a Motown star in a past life, Sheer Mag took the scene by storm over the course of three compact and thrilling EPs in as many years. Now they’ve returned with Need To Feel Your Love, their much anticipated debut album that delivers on the promise of their early work while showcasing fresh new avenues for the band to explore.

While those looking for killer riffs and booming hooks won’t be disappointed, the band pushes further by embracing disco and funk throughout their debut. The title track finds Niles Rodgers as much an inspiration on guitarist Kyle Sweeny as Angus Young while the band saunters and grooves over a feel-good summer jam. This soulful approach is embraced throughout, especially on the loose “Pure Desire”, where Halladay explores the tenderness and grit in her voice. The band’s experience together pays off as they show off their interplay, whether it’s Halladay belting “more, more, more” as Sweeny rips through a solo on “Turn It Up,” or the finale to “Suffer Me” where they repeat the song’s refrain a bit higher each time, daring and pushing each other to big moments.

Sheer Mag rarely take a measured approach, and whether they’re writing songs about breaking windows or making out, it’s always with a heightened fervor. Over a playful Southern rock riff, the band admits as such on “Can’t Play It Cool”, a song so unabashed that it owns its dramatic spoken-word bridge completely. When they write a love song like lead single “Just Can’t Get Enough”, it’s a bewildering, dizzying expression that captures the rush of a new infatuation. On “Pure Desire”, Halladay sings about craving “the rush, the jolt when we touch.” Her swagger is palpable, whether she’s singing about sluggin’ drinks with friends, yelling at the bartender to turn up her favorite song, or threatening anyone that dares to touch her records. There’s no detachment or disaffection in these songs that dare you to match their abandon.

One reason the band connected early with punk and DIY audiences was the political nature of their music, songs of protest built on dismantling power structures designed to oppress while calling out abusers, slumlords, and cops. In an age where the bar for political music is so low that any indie-rock band writing a positive song about love filled with vague platitudes can sell it as an anti-Trump attack, the direct punch of Sheer Mag is refreshing. “Meet Me In The Street” kicks the album off with a rallying cry for action, with Halladay singing about smashed glass, bottles and bricks, and “throwing rocks at the boys in blue.”

This riotous spirit is put in context with historical nods throughout the album, as “Suffer Me” opens by recalling the Stonewall riots and the album closer works as a tribute to Sophie Scholl, a German activist who helped lead the anti-Nazi White Rose movement in the early 1940s before her eventual capture and execution. By looking to these recent revolutionaries for inspiration, the band’s own songs of protest take on more weight as calls for justice against oppression. This drive that sparks their music is made most apparent on standout “Expect the Bayonet”, an urgent protest song that both speaks out against voter suppression and serving as a warning shot against the current system designed to stomp on the underprivileged.

Between the soaring classic rock riffs, soulful vocals, newfound exploration of funk, and even faithful ‘90s covers, Sheer Mag is a band that excels within a conventional framework. Their debut album is a strong showcase that only suffers slightly from the pacing issue of moving to a 12-song LP after mastering the EP format. The album’s back half gets bogged down by some of the mid-tempo tracks, especially an out-of-character ballad (“Until You Find The One”), after burning through the tremendous highs of its first side. However, their quick mastery of soul and funk shows a band with a handful of tricks left up their sleeves. Sheer Mag is a band that’s unafraid to feel, whether it’s desperation, rage, or overwhelming love. Over the course of an urgent debut, they let their guard down and embrace their emotions, showing the rest of us that we could all afford to as well.