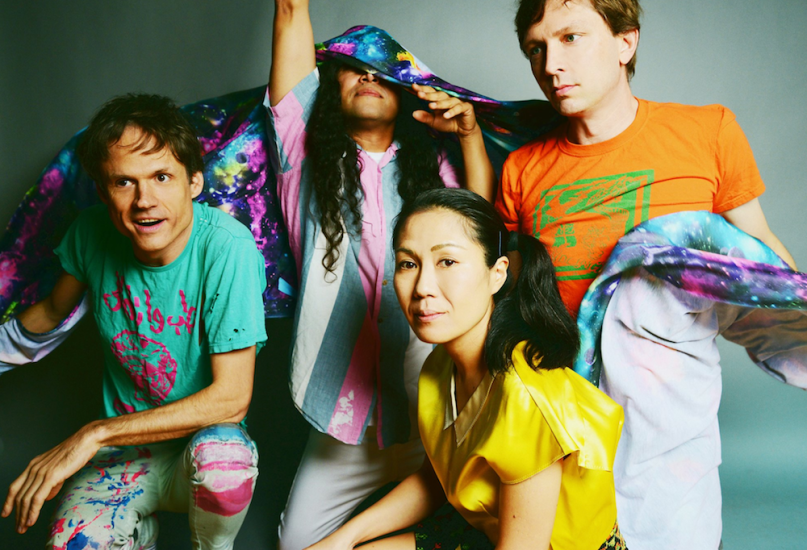 Deerhoof have a new album on the horizon titled Mountain Moves. The follow-up to last year’s The Magic features a string of guests (including Stereolab singer Lætitia Sadier and Wye Oak’s Jenn Wasner) and is being teased today with a song called “Your Dystopic Creation Doesn’t Fear You”.

A collaboration with rapper Awkwafina, the track traces moments of blues rock, psychedelic rock, and indie pop for a pleasantly strange concoction that recalls Deerhoof collaborators The Flaming Lips on some kind of Eric Clapton trip. (These are all good things, FYI.) In a statement, Deerhoof discussed the track and how it came about while reflecting on America’s less-than-perfect, complicated relationship with racial politics:

“In the span of 10 short days last April, Prince passed away, and Bill Clinton shouted down a small group of black women who dared question the morality of 90s legislation with which he ushered in the era of unprecedented mass incarceration that continues to this day. Something about the random concurrence of Prince’s glowing obituaries and Clinton’s elitist intimidation tactics seemed to point at an absurd contradiction at the heart of America’s treatment of its citizens of color. Fortunately a favorite writer, The Guardian’s great Steven W. Thrasher, helped make sense of these events in his crucial commentaries: “Prince broke all the rules about what black American men should be” and “How dare Bill Clinton shout over Black Lives Matter protesters?”

Now over a year has passed. Many Americans, suddenly in search of strategies for surviving state repression, are turning away from witless neoliberal politicians who exploit fear to amass more power for themselves, and towards those vulnerable communities who have responded to a history of violence not with submission, but with humor, creativity, anger, and love. The song we are debuting today grew out of these observations. Strictly speaking it is not the first Awkwafina-Deerhoof collaboration, as both Satomi and Greg have guested on “My Vag” onstage. But this call-and-response is our first co-composition. Enjoy!”

Mountain Moves, which also features the similarly socially conscious single “I Will Spite Survive”, arrives September 8th through Joyful Recordings. “Your Dystopic Creation Doesn’t Fear You” is also being released as the latest installment in Adult Swim’s year-long Singles Program.