David Lowery's near-wordless feature is a beautiful meditation on grief, loss, and time 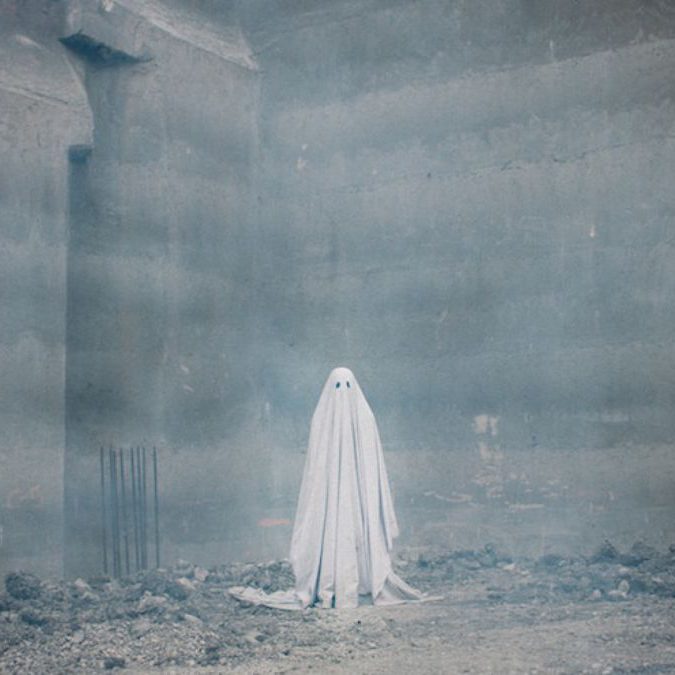 A Ghost Story might have a ghost at its center, in the most traditional sense, but David Lowery isn’t exactly a genre filmmaker, and A Ghost Story is not a horror film. It’s a quiet, delicate piece, one aching with regret and loss, an impressionistic approach to death which eventually reveals itself as a touching elegy for the passage of time. To call it haunting seems like a hacky critical indulgence, but there are few words that better describe Lowery’s moving and reflective feature. It lingers like its wordless protagonist over an assemblage of sorrowful vignettes that combine to speak on something intangible about the sensation of disappearing from the Earth, with clarity and grace.

C (Casey Affleck) and M (Rooney Mara) live an affectionate, if sometimes difficult, life together. Yet when C is suddenly killed one day, he rises from his gurney in the morgue, still clothed in the sheet in which his body was covered. With a pair of jet-black eyepatches, looking like a child’s stock Halloween costume, he returns to his home, where M struggles to find her way in the world without him. As the film goes on, M moves on to another home and another place, where C cannot. His ghost is bound to the home they shared together as the tenants and the years go by, and as C’s humanity recedes further and further into the ether of time and memory.

Those concepts are integral to Lowery’s elliptically unfolded film. A Ghost Story is the kind of film which demands patience, not least because of the static photography and largely wordless storytelling Lowery employs. Aside from one ranting monologue, there are prolonged stretches of the film which unfold without dialogue and with only flourishes of a score, save for C’s occasional exchanges with another ghost in the house next door (captured via subtly humorous subtitles), also searching for something it can’t exactly place. Between this and the film’s sustained shots – like one in which M stress-eats an entire pie for several uninterrupted minutes of screen time – Lowery’s plotting demands attention to the fine details and a willingness to surrender to the film’s heady, dreamlike rhythms.

Lowery’s low-budget, quickly assembled film (it was produced in secret on an abbreviated schedule) is gently devastating, a tone piece about the slow erosion of a being’s humanity and what it means to be irreparably lost. Lowery rounds off the edges of his 1:33:1 framing, a vintage aesthetic touch that gives the impression of witnessing C’s wanderings through a series of hazy, aging old photographs. “Hazy” is a solid word for much of cinematographer Andrew Droz Palermo’s work here, who lends A Ghost Story a necessarily ethereal quality. Palermo’s photography often relegates the ghost to the sides of the frame, omnipresent but often uninvolved. Though the ghost occasionally forces its way into the scene, in fits of anguish or rage or confusion that cause the power to surge and the residents to panic, it’s a passive presence, lending to the film’s larger tone of drifting through existence.

Lowery’s central ideas are best established in the one dialogue-heavy scene in the whole film, a rambling soliloquy by a twentysomething intellectual type in the midst of a night of drinking and partying. He touches on the transience of art and life alike, suggesting that art primarily exists to leave something behind which can untether itself from time and exist beyond the end of the physical body, even if it may not matter at all. As C wanders through time and place, in worlds familiar to him and entirely foreign, A Ghost Story meditates on grief as well, finding the humane in the unfamiliar through common gestures, from C scratching at the frame of a door in an unspoken fit of longing, to the neighboring ghost expressing how it can’t remember who it was waiting for.

The storytelling is conveyed through style over narrative, both in Palermo’s lingering visuals and in Lowry’s editing. The director started as a film editor, and A Ghost Story is an affirmation of the potential for what good editing can do within the medium. Lowery manipulates time in fascinating ways throughout the film; one progression sees a young girl, cruelly left for dead, as she decomposes and is consumed by an overgrowth of brush in just a few quickly matched frames. In one of the more breathtaking compositions, C’s ghost gazes out over an unfamiliar world, one with nothing left for him, and his next actions untether the film from linear time itself. Lowery teases the emotion out of the film’s increasingly unfamiliar scenes, matching emotions through time in subtle but striking ways.

A Ghost Story is filmmaking that challenges and exhilarates, a potent reminder of how many new places film can still be taken even after a century of people working in the medium. Though it deals in some of film’s oldest concepts (memory, grief, loss, the passage of time), it imagines them in ways that feel at once foreign and searingly human. Lowery deals with abstract concepts in intensely personal ways, offering a film of uncommon intimacy and feeling. That young man at the party offers the optimistic (if qualified) hope that “maybe we figure out a way to carry these things with us,” and as Lowery suggests, we always do. Whether it’s in this life or in another, whether as a physical presence or in whatever might come next, there is meaning in what we do here, and in what we leave behind.