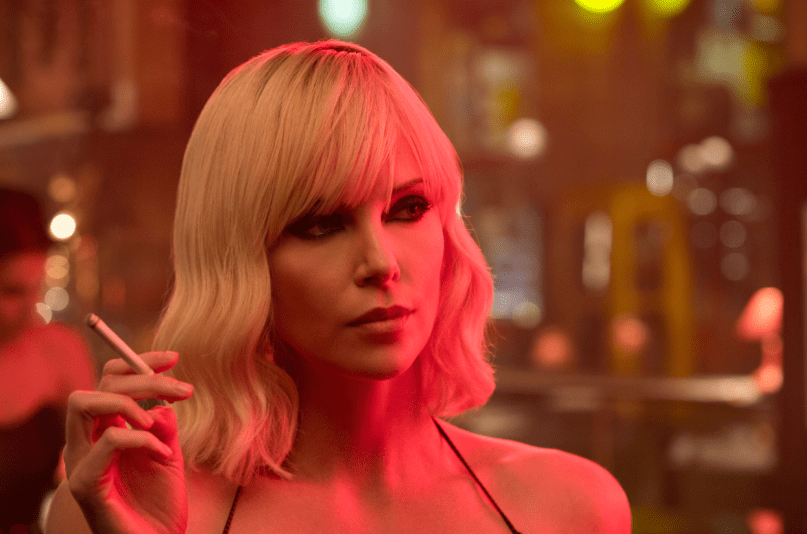 What is it with stairways and action films? They’ve worked for Brian De Palma, they’ve worked for Jason Bourne, they’ve worked for Daredevil, and now they’ve worked for Charlize Theron. Is it the depth? The number of angles? The tumbling? The way someone’s always going to have the upper hand? Who knows, but there’s a scene about 85% of the way through David Leitch’s Atomic Blonde that will one day be lumped into a video montage that some over-excited YouTube user will dub, “GREAT ACTION STAIRWAY COMPILATION!1!”, and it’s going to end with the Oscar-winning actress ripping through a baker’s dozen of Russian dudes like they’re a roll of pizza dough. It’s without a doubt The Scene in the film, and one of two takeaways that every genre fan will recall when its forthcoming neon-glazed poster pops up in future Netflix queues.

The other? That Theron is going down as this decade’s most iconic female action star. Granted, she already had the title after stealing the spotlight from the titular hero of Mad Max: Fury Road as the one-armed Furiosa, but her cutthroat heroics in Atomic Blonde — at one point, she uses a rope that’s tied to a bad guy’s neck and swings out a window to a balcony below like Indiana Jones — is a further testament to the rigorous intensity she brings to every performance, both onscreen and behind the scenes. Did you know she broke her teeth for this one? Well, she did, and that fact is not at all surprising when you see how much Leitch puts her through the wringer. To be fair, Theron’s long been shepherding this project as a producer; in other words, she actually signed up for the chaos, and you have to appreciate that level of commitment.

But c’mon, what a role: Based on Antony Johnston’s graphic novel The Coldest City, Theron plays Agent Lorraine Broughton, the go-to spy of Her Majesty’s Secret Intelligence Service, who enjoys ice cube baths, neo-futuristic bedrooms straight out of Paul Verhoeven’s Total Recall, and killing her enemies in the most savage ways possible. It’s 1989 and the Berlin Wall is about to come down, a frantic backdrop that fuels much of the film’s politically-charged action. Broughton’s mission is to locate a priceless dossier — think the NOC list from 1996’s Mission: Impossible — before it falls into the wrong hands and every spy around the world is compromised. For the assist, she’s paired with Berlin station chief David Percival (James McAvoy), who chugs Jack Daniels, shares a hairstyle with Sinead O’Connor, and keeps Hustler in his library.

Story-wise, it’s not very compelling despite the history at hand, and it doesn’t help that screenwriter Kurt Johnstad tries to make everyone sound 1999 Cool and that the whole narrative is framed within a start-and-stop debriefing, which is always a red herring for twists, and turns, and would-be endings. Sadly, these tedious attributes keep Atomic Blonde from actually being as exceptional as it looks and sounds, but these sins are easier to forgive, and even overlook, when you’re staring at everything else that’s happening onscreen. When you’re not shaking your head at Theron’s glass-crunching gymnastics, you’re probably soaking up Leitch’s emerald-lensed atmospheres, Luhrmann-esque setpieces, and sensual lighting that could give Nicolas Winding Refn a seizure or two. That’s all without saying a single thing about its fabulous soundtrack.

Similar to Edgar Wright’s Baby Driver, which also premiered at this year’s South by Southwest, Atomic Blonde banks on a rich, flavorful soundtrack, only this one’s chock full of all those ’80s hits that make you say aloud, “Oh, I fucking love that song.” Stuff like New Order’s “Blue Monday”, David Bowie’s “Cat People (Putting Out Fire)”, Public Enemy’s “Fight the Power”, Peter Schilling’s “Major Tom”, George Michael’s “Father Figure”, Nena’s “99 Luftballons”, ‘Til Tuesday’s “Voices Carry”, Depeche Mode’s “Behind the Wheel”, and the list goes on. There’s rarely a scene that doesn’t include one of these FM hits, and anyone who grew up watching Michael Mann’s Miami Vice will be on cloud nine reveling at how these New Wave classics turn the film’s feverish action into something of a cotton candy dream — sugary, weightless, creative, and beautiful.

Needless to say, Leitch, who co-directed John Wick with his pal Chad Stahelski, will have his own moment in the spotlight with Atomic Blonde, and there will likely be those who compare his strengths and/or weaknesses against Stahleski’s epic showing with John Wick: Chapter Two. That’s fine. That’s good. That’s exactly what these movies should do. And really, that’s exactly what these movies will do. Because who are we kidding; odds are we’re going to see many more of Ms. Broughton’s adventures, especially if we’re to take into account how much Theron enjoys stabbing bad guys in the throat, crashing cars into icy waters, and rolling around in bed with beautiful women.

Oh, did that last part go unmentioned? Yeah, that’s another facet of Atomic Blonde that sets it far apart from, well, everything else that’s out there right now. Some might argue the scene is a tasteless inclusion, that Hollywood would never be so bold to have a male hero do the same, and they’re certainly more than justified in those arguments. But perhaps some might come to see it as liberating? Whatever the outcome, it’s a total surprise, and if Leitch and Theron can keep those stray bullets coming, and continue to climb the right stairs, there’s no telling how long Atomic Blonde stays nuclear.