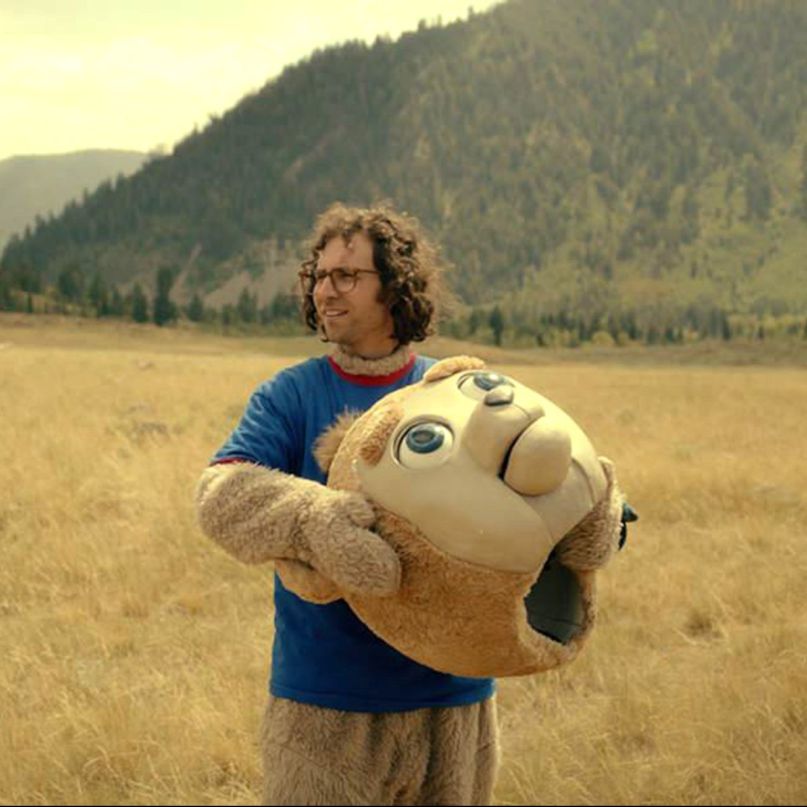 The following review is part of our coverage of the 2017 Sundance Film Festival.

“Quirky” has become such an exhausted shorthand for a certain kind of forcibly twee indie cinema that it’s sometimes hard to remember that good movies can still earn that description. But if “Sundance-friendly” low-budget comedies have become one of the more maligned subgenres of film in recent years, Brigsby Bear offers a touching and daringly unconventional reminder of how no approach to filmmaking is inherently bad with the right mind at the helm.

And as unorthodox comic minds go, few are more distinct than Kyle Mooney’s. The deadpan, earnest Good Neighbor and SNL alum is the heart of Brigsby Bear, built as a vehicle for the actor and co-written by Mooney and Kevin Costello. Its uniquely weird tone is set early, as James (Mooney) goes about his daily rounds in his family’s self-sustaining home. He does his chores, he attends his home-schooling classes, and he eats dinner around the table with his loving, awkward parents (Mark Hamill and Jane Adams). Mostly, though, James obsesses over Brigsby Bear Adventures, his all-time favorite television show. Brigsby teaches James about everything he could ever want to know, from the value of friendship to important lessons about how “prophecy is worthless, only trust your familial units.” James gets lonely sometimes with only his parents and his fellow Brigsby enthusiasts on the internet for company, but it’s never so bad. Brigsby always has his back, even when James goes out onto the house’s “pier” and gazes with longing at the larger world beyond his home.

It’s clear from early on that all is hardly well with James, and when he’s suddenly and abruptly ripped out of the existence he once knew, Brigsby Bear does away with convention in favor of a smarter kind of comedy about a man-child forced to confront the many, many things he doesn’t understand about the real world. First-time director Dave McCary (a fellow SNL name of recent seasons, behind the camera) metes out information about the nature of James’ upbringing in effectively small doses, allowing the film’s blending of dark humor and pathos to come through naturally, rather than through a series of comic setpieces. When James is returned to his actual parents (Matt Walsh and Michaela Watkins), after learning that his life up to this point hasn’t been what he thought it was, James is left to understand his new and terrifying future in the only way left that makes any sense to him: through Brigsby Bear Adventures and its lessons about heroism, loyalty, mathematics, and danger. And so James sets out to make a proper series finale for the show, and find some peace in the process.

It’s a measure of how confidently well-made Brigsby Bear is that it rarely gets bogged down in its high-concept setup. While some characters get lost in the shuffle as the film goes on (particularly Claire Danes as a barely-there therapist and Greg Kinnear as a kindhearted cop who’s delivered well but plays like an interloper from a broader comedy), James anchors the story as an innocent blank slate onto which other characters try and impose their wisdom, and instead offer their neuroses and hang-ups. His parents are at first ecstatic to have him home, but struggle to understand exactly how and why James turned out the way he did. His new friends, as his sister Aubrey (Ryan Simpkins) points out, are too young for him, for as kind as several of them are. And as Mooney’s cleverly stilted delivery suggests, it’s not necessarily that James can’t learn how to engage. It’s that he doesn’t want to, not when so little makes sense and nobody even knows who or what Brigsby Bear is. It’s hard to argue with a confused man who just wants to reclaim some semblance of normalcy.

Much of the pleasure of Brigsby Bear comes from the places the film goes with its seriocomic premise, so we’ll try to preserve those here as much as possible. That said, Mooney delivers a breakout performance as the maladroit, uncomprehending James. There’s a sincere yearning to his turn that distinguishes Brigsby Bear from so many indie comedies about young men coming of age, and that Mooney uses to moving effect. The revelations seem to burst out of him uncontrollably; when he awkwardly declares that “I made a friend!” upon connecting with Spence (Jorge Lendeborg Jr.), it’s at one haphazardly dorky and sweetly unexpected. The idea of an underdeveloped young man finding himself is hardly new comic territory, but Brigsby Bear speaks to a more innate kind of need: for friendship, for love, for the chance to say something through art that will matter to someone else.

It’s also a well-considered comedy in its filmmaking. McCary lends a number of effective surrealist touches throughout, the most interesting of which are found in the Brigsby Bear Adventures episodes, which mine the grainy oversaturation of faded VHS tapes for both nostalgic chuckles and an understated, off-the-cuff menace that only continues to gather strength as the film goes on. (The episodes are both educational and littered with messages about the values of obedience and incuriousness.) And again, the film’s other (and best) comic weapon is Mooney, whose expressive performance is good for everything from uncomfortably lengthy cutaways to a welcome streak of downplayed physical comedy, mostly stemming from Mooney’s knack for finding small ways to fail at basic daily customs.

Brigsby Bear is the kind of comedy where the laughs sometimes sting, tinged with a melancholy that beautifully compliments James’ childlike sense of obsessive ambition. But it’s also frequently hilarious, in its warm eccentricity and in its sense of wonder about the practical aspects of making a low-budget movie with your friends and anyone else willing to lend their time for an afternoon. Brigsby avoids some the bleaker realities of its story; one late conversation between Mooney and Hamill, in particular, is both a fun nod to the latter actor’s filmography and a moment of catharsis for both men in wildly different ways. It’s the rare dramedy that ably speaks to both ends of that duality, as funny as it is touching, and it’s a reminder of how a great movie can emerge from even the most familiar places. It just needs the right idea, and maybe a talking bear suit.