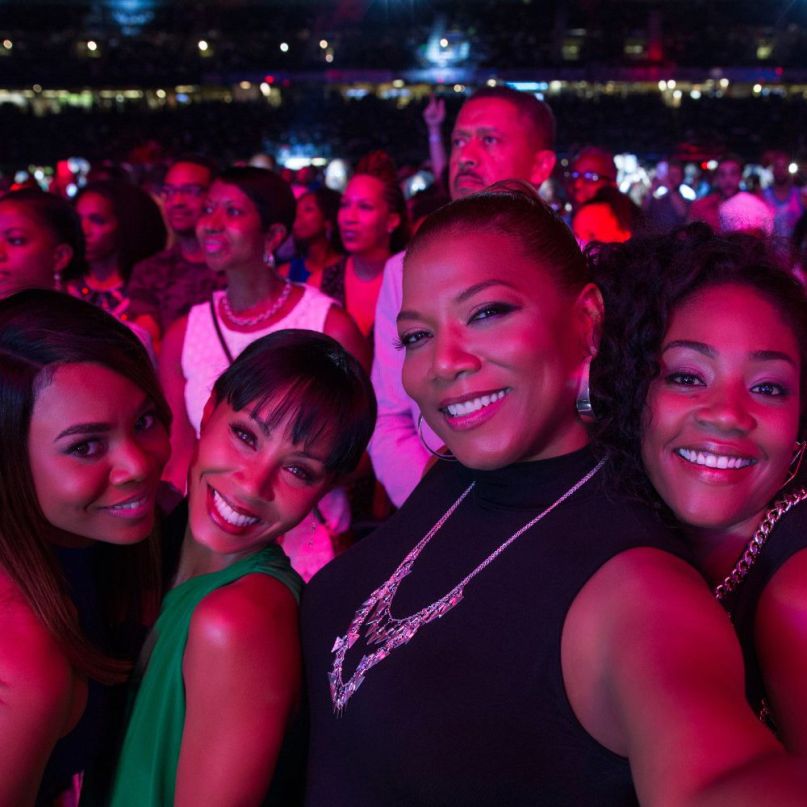 For a comedy that absolutely earns its R rating throughout, Girls Trip is also sweetly old-minded in its take on friendships struggling against age, hurt feelings, and mistakes made over time. Malcolm D. Lee’s stab at a Bridesmaids-esque journey of debauchery is funny, sometimes uproariously so, but its greatest strength isn’t in the filthiest stuff. It’s in the rapport between four women who’ve worked hard to remain friends, even as the natural progression of time continuously pulls them further and further away from one another. It’s also a movie with one of the more unforgettable golden shower sequences put to film, but its oversized heart is what will leave the most lasting impression for many.

Circa 1992, the Flossy Posse were best college friends, ready to take the world by storm. But as it goes, life had other plans. Ryan (Regina Hall) has become a hyper-successful lifestyle guru; she and her ex-football player husband Stewart (Mike Colter) are a public power couple, dealing in everything from books to TV shows to seminars and beyond. Sasha (Queen Latifah) was once a successful prestige journalist, who in more recent years has jumped into the lucrative (if soulless) business of TMZ-style gossip writing. Lisa (Jada Pinkett Smith) is a worried single mother of two who left her wild child days behind long ago, while Dina (Tiffany Haddish) is introduced as she’s being fired from her job over a sandwich-related altercation with a coworker, refusing to acknowledge that it’s happening all the while.

When Ryan is invited to New Orleans’ annual Essence Festival, where she and Stewart will serve as the keynote speakers, she decides that it’s time for the Flossy Posse to ride again. (In a fashion, the whole film is one long commercial for the real-life festival, down to a running series of live musical performances from Diddy, Mariah Carey, New Edition, and more.) In theory, a weekend of reckless hedonism, stunning men, and an inhuman amount of alcohol awaits them. At least, that is, until one of Sasha’s tabloid contacts forwards a picture of Stewart getting intimate with a woman who certainly isn’t Ryan. Soon they’re off on a strange group journey of self-discovery and validation, albeit with the same intake of booze, as each learns in their own way that perfection is overrated, and more or less impossible.

Girls Trip is as thoroughly charming as it is raunchy, and much of that charm comes from the foursome around which it’s built. Hall has been a standout in ensembles for years, but she’s the ostensible lead here, and makes the most of it. Her complicated relationship with the philandering Stewart adds a unique note to what’s otherwise a familiar melodramatic beat; it’s not that she’s unaware of his infidelity, but her career is so tethered to him that she’s forced to choose between standing up for herself and losing everything she’s worked toward for years. The actress is able to swing near-flawlessly from slapstick comedy to downcast angst to flirtatious romance and back around again throughout, and it’s a magnetic starring turn that elevates the performances around her. (This is especially true of Larenz Tate as Ryan’s long-lost romantic interest, who’s effortlessly charming in their scenes together.)

But if it’s Hall’s performance that brings the film together, it’s Haddish who emerges as the breakout superstar. Dina is a walking tornado of filthy punchlines and wild energy, and Haddish gets the lion’s share of the film’s biggest laughs, whether she’s threatening Stewart in graphic detail and flawlessly pivoting her arguments to match the scene, or extolling the virtues of the sexual “grapefruit trick.” (Google it, just not at work.) Yet in the actress’ hands, what could’ve been a one-note comic relief performance turns into something more; when she invites her friends to pray before bed, or acknowledges that she only sees herself as the “funny one” in the friend group, there’s a depth to Dina that sets her apart from what’s otherwise a fairly stock character.

The same could be said for Latifah and Pinkett Smith, respectively touching and funny even as their characters are given a bit less by the film’s incredibly busy screenplay, co-written by Tracy Oliver and Black-ish creator Kenya Barris. (This is a hallmark for Lee as well; his Best Man movies never met a fourteenth running plot thread they couldn’t shoehorn in.) Even at a bloated two hours, the film leaves Sasha and Lisa feeling somewhat underdeveloped by comparison, although both actors do fine work in their showcase moments. Lisa’s neurotic panic about getting back into the dating (or at least sexing) game is good for a handful of big laughs, and Sasha’s moral crisis about the kind of money she makes is effective enough. But after a while, it’s clear that Girls Trip is at its best and most natural when it lets its central quartet riff off one another, an approach responsible for most of the film’s best material.

Even as it careens from one setpiece to the next, with some hokey-yet-kindhearted platitudes here and some dramatic moments there to offset the humor, the looseness of Lee’s comic approach is the film’s best face. An extended sequence involving hallucinations induced by a 200-year bottle of absinthe lets each of the actors swing for the rafters, and it’s a small masterpiece of escalating hilarity as Sasha romances a lamp and Ryan attempts to fake her way through a pitch meeting by toasting with a lit candle. Lisa brings home a handsome college student (Kofi Siriboe) with an allegedly massive penis, only to cause him grievous injury in her attempts to spice up their encounter. Girls Trip may deal in broad comedy, but it’s an example of broad comedy done well, and delivered by utterly committed performers.

It’s also a surprisingly affirming film for one so gleefully nasty. Girls Trip is every bit as concerned with the power and importance of friendship, between women and between black women in particular, as it is with its raunchy sight gags. Particularly in the case of Ryan’s story, it makes an impassioned case for the value of self-worth above any career or romantic goals, and the film distinctly establishes any and all love interests as secondary to the lasting love between four women who’ve had trouble keeping in touch over the years, but know how much it matters to them to keep doing so. And in its final scenes, Girls Trip offers a different kind of happily-ever-after for the romantic comedy: best friends, laying in bed together, smoking a joint and laughing at outrageous nudes. We should all be so lucky to find that kind of support system in this lifetime.