A short, sweet assemblage of star cameos and filthy jokes 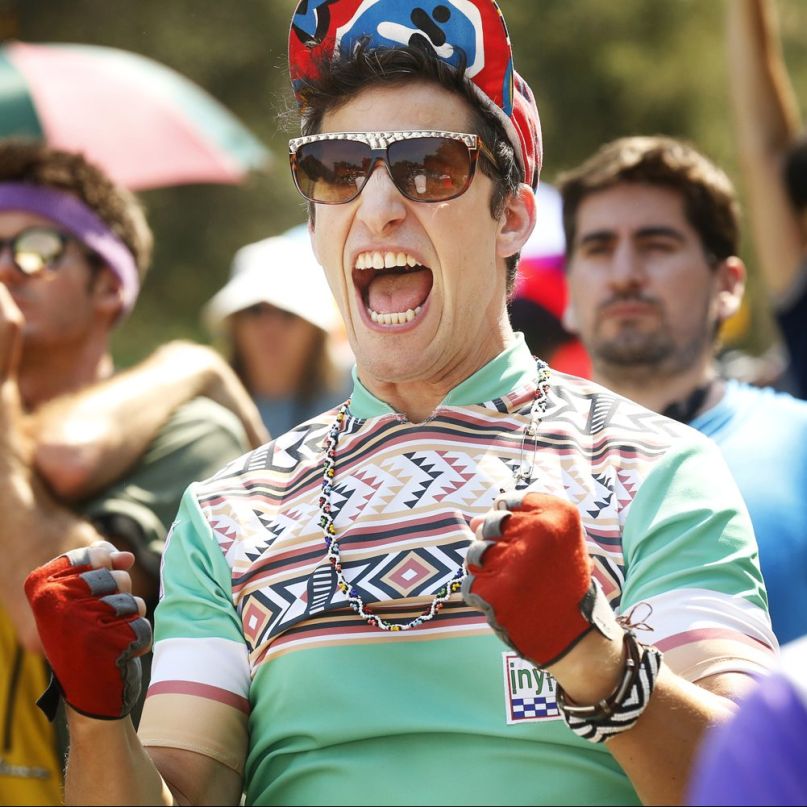 It’s 1982, and the Tour de France is in full swing. But Tour de Pharmacy isn’t just a chronicle of a 35-year-old bike race; it’s a documentary account of a watershed moment in organized sports. After all, it’s not every year that a field of 170 riders is reduced to just five when doping and bribe scandals disqualify almost every competitor.

In 2015, director Jake Szymanski and writer Murray Miller delivered 7 Days in Hell, another HBO-produced mockumentary about an infamous weeklong tennis match. Tour de Pharmacy is cut from the same cloth; it’s packed to the brim with star cameos, it’s full of preposterously vulgar sight gags, and at less than 40 minutes in length it’s quick enough to avoid overstaying its welcome, even if it’s more of an extended collection of sketches than a film. Structured like a 30 For 30 directed by Mel Brooks, Tour de Pharmacy is mostly just an excuse for Szymanski and Miller to encourage a roster of A-list talent to do some weird character acting.

As those characters go, Tour de Pharmacy has more than enough gags to justify its existence. After most of the riders are eliminated, following an embarrassing fight that ends in a doping needle being discovered in a water bottle, just five remain. Juju Pepe (Orlando Bloom) pushes himself to the absolute limit, even if history would reflect that the ’82 race ends in tragedy for the young star. Gustav Ditters (John Cena) is all natural, a monster of the racing circuit who insists that all those bags of blood in his fridge are just Gatorade, offering to drink it on the spot for the police. Marty Haas (Andy Samberg) is the TDF’s first African competitor, even if everybody else in Africa seems to hate him. Slim Robinson (Daveed Diggs) is the nephew of Jackie, hopeful to stand as a black pioneer in another white sport even if few of those opportunities remained by the early ‘80s. And Adrian Baton (Freddie Highmore) was the race’s first female entrant, competing in drag to remain in the running.

Tour de Pharmacy is a modest success of aggressively stupid comedy. Its abbreviated runtime means that few jokes get the chance to breathe before it’s on to the next, but the machine-gun nature of Murray’s screenplay also allows for a handful of terrific gags. The HBO-style talking heads get some of the best material, as Joe Buck and Mike Tyson remark on the physical endurance and penile girth of professional racers with pitch-perfect deadpan delivery. (There are a lot of dick jokes on hand, and if the idea of Bloom riding a bicycle while pissing all over himself in order to remain ahead of the pack isn’t funny to you, this might not be your thing.) Likewise, Nathan Fielder is hysterical in a small handful of cutaways as a doping expert who’s also sampled all banned substances in order to better perform his job.

The faux-doc structure allows for Szymanski to drown the film in every cameo he could possibly land, from Danny Glover to Chris Webber, and virtually every performer gets at least one great laugh line out of the come-and-go approach. There isn’t much to Tour de Pharmacy overall beyond its ribald gauntlet of jokes, but this ends up being a boon to the project. There isn’t much of any time wasted on plot, and at less than an hour, what’s ultimately a one-note joke is played as long and loud and well as that note can be. Sometimes one just wants to kick back and laugh at J.J. Abrams waxing philosophical about the cinematic accomplishments of Juwanna Mann, or Cena bench pressing a naked man in a fit of rage.

This review won’t spoil any more names, as the blindside nature of the casting is half the fun. (This is especially true of how Szymanski chooses to age up his leads; Cena’s present-day equivalent is especially good.) But the biggest stunt Tour de Pharmacy attempts is also the one on which it’s being sold, so it’s likely not much of a spoiler to touch on how Szymanski and HBO somehow talked Lance Armstrong into an extended riff on his own doping scandal. While it’s hard to argue that it’s within good taste, given that Armstrong himself lied through his teeth for as long as he possibly could on the subject, the gag nevertheless works. Obscured by a voice modulator, if not by the documentary crew, Armstrong lets Tour de Pharmacy take him as far as it’s willing to go. And if its shots do occasionally feel like pulled punches, it’s still proof that most people are better off when they can take a joke about themselves. Even disgraced legendary athletes.