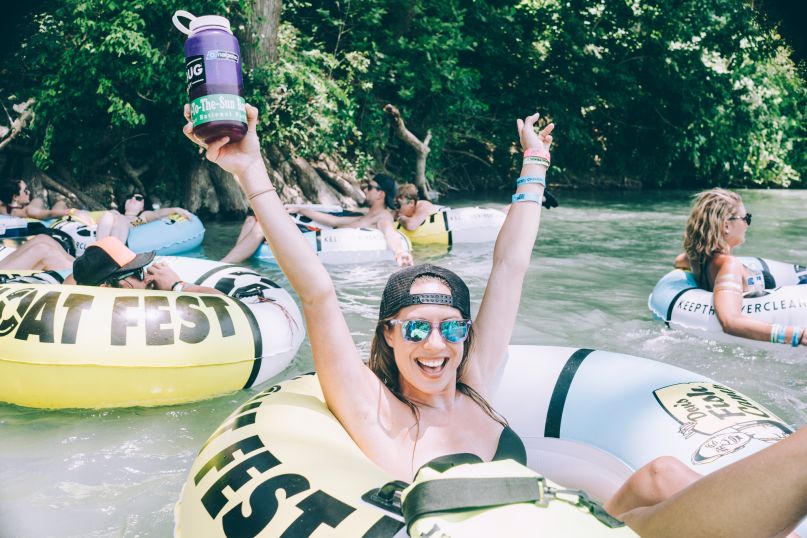 Travel 30 miles southwest of Austin and you’ll find San Marcos, Texas—a college town lined by the San Marcos River that is visited by thousands of tubing floaters each year. This past weekend, 30,000 people spent hours floating on the river before reaching the gates to Cool River Ranch: 125 acres of land that became the birthplace of Float Fest four years ago.

In broad strokes, the festival is comparatively small with a habit of keeping its qualities in pairs. There’s two large stages, two sold-out days capped off at 15,000 tickets, a couple of carnival rides, and two bonuses in addition to the live music: camping and floating. The festival’s lineup has expanded during its growth, including this year’s headliners—ZEDD, Weezer, Cage the Elephant, MGMT, Passion Pit, and Mac Miller. Although the lineup wasn’t very unique, and the crowd wasn’t much either, what set the festival apart among its peers was its strong sense of camaraderie.

There was zero concern for “who wore it best,” little acknowledgement to the wristband pecking order, and a familial assurance to having a good time despite moments of festival disorganization, which could have been seconds from disaster. In a way, the lack of pretension that typically couples with summer festivals did, in fact, make it just about the music. And as a young festival that is independently owned and produced without a large corporate backing, a “shit show” experience is often to be expected, though they’re hardly at fault for the weekend’s greatest offense: the triple-digit heat.

Unfortunately for the festival, weather extended beyond simply comfortability. “It’s hot as shit up here and I think our computer’s melting, but they’re going to put some ice on it,” Snakehips‘ James Carter told their fans. Although their set was cut short, that didn’t keep the Londoners from remaining in good spirits for the rest of the festival. “I love American festivals, they’re fucking way more turnt, I just love it over here,” Oliver Lee told Consequence of Sound during Mac Miller’s set. “I haven’t had enough time to do the actual floating, but I’ve done some natural floating, it’s a lot better than sinking.”

Most artists, however, appeared unconcerned by the heat. Mac Miller put on one of the most engaging sets of the entire festival. Girl Talk’s Greg Gillis entertained a sweaty mob of twerkers and crowd surfers with toiler paper bazookas. (Not surprisingly, the security appeared hilariously stunned at the situation.) And Cage the Elephant closed down the festivities with a visceral performance that connected to the festival’s more intimate ethos, particularly when frontman Matt Shultz said, “I just want to let you all know, because sometimes it can get confused and doesn’t really make sense. I don’t like that I’m up here and you’re down there, but we’re on the same level.”

Though, even Cage wasn’t free from their own range of technical difficulties. As their set came to an end, Shultz ran to the side of the stage making sure the tech guys knew to push the fire button on the last song — and for good reason. Earlier that night, as Shultz told Consequence of Sound after the set, the fire came out at the wrong time, almost burning him. True to his spirit, Shultz casually brushed it off and admitted that it was still “fucking awesome.”

One might say the same thing about Float Fest in general. Again, there’s nothing particularly special about anything on the surface, but it’s the spirit that lies within.“Texas has a lot of location festivals,” Wild Child vocalist and violinist Kelsey Wilson told us. “They’re all in small little towns, where it’s the only thing that happens there every year. Here, you have your own little place— the river, outdoor activities, helicopter rides. It’s still a big budget thing, but you have to drive for an hour in the hill country so you can tube and listen to music.”

Sometimes that’s all you need.