Plus, an interview with the gypsy punk outfit's sui generis frontman, Eugene Hütz 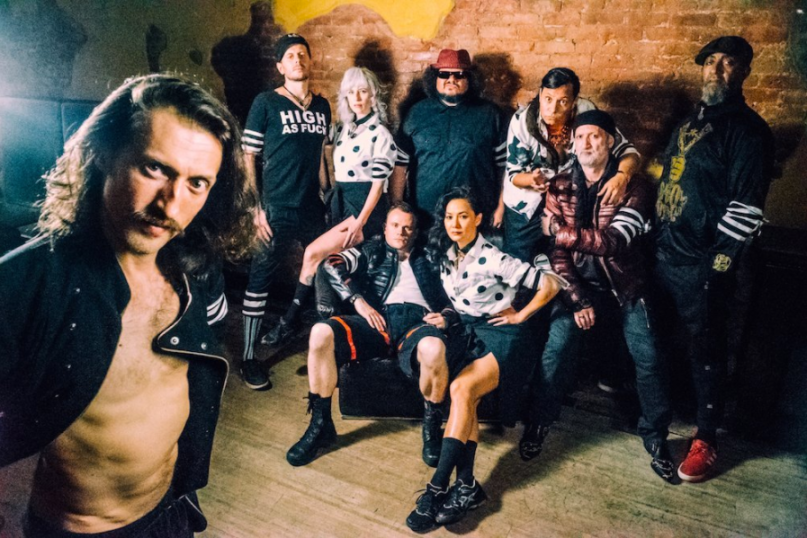 Gogol Bordello have long blazed their own path through the world, musically and otherwise. Led by uniquely charismatic frontman Eugene Hütz, the ever-evolving collective has defied the boundaries of continents and genres in their quest for spiritual illumination through gypsy punk. That path isn’t always something society has clearly defined, obviously, which has forced the band to forge one of their own.

That concept of creating your own route to self-advancement is at the core of Gogol Bordello’s new single, “Walking on the Burning Coal”. The song is as contemplative as it is emboldening, the verses finding Hütz examining a familiar wanderer’s desire and the choruses demanding a challenge to be faced. “Leave behind scenarios made for you/ And stay on a path to your own pole,” he sings. “I guess ain’t no ordinary stroll/ Gets the sailor knot in my chest undone.”

“Walking on the Burning Coal” is the latest taste of Gogol Bordello’s forthcoming full-length, Seekers and Finders. The follow-up to 2013’s Pura Vida Conspiracy is out August 25th via Cooking Vinyl (pre-orders are going on here). To find out more about the new record, Consequence of Sound spoke with Hütz about producing for the first time, teaming with Regina Spektor on the title track, and writing a gypsy punk album for 2017.

Clearly, so much of your music finds its origins in your Eastern European roots and experience in Latin America. Yet, you say that the songs on Seekers and Finders didn’t come together until you returned to New York, as you say it’s always done. What is it about NYC that allows you to focus your and your music’s transcontinentalism and allow you to put together a true album?

Eugene Hütz: Well, the first time I landed my foot on Manhattan I knew: I’m an island man, and that’s my kinda hell of an island. There is clearly a powerful focus point in the soil which acts as a lens for a hyper-creative psyche…  it’s surely a lens for all the rays of Gogol Bordello. We go out into the world, we experience, and bring it all back home to NY to transmute.

There’s an interesting contradiction to how NYC helped you focus on a record that is largely a middle finger to the idea of looking beyond the present moment, considering the present is currently so politically loaded and our President’s connection to the city. Not to mention that your band has a beloved song called “Immigrant Punk”, which seems rather germane to now. Is there much political mindedness in Seekers in Finders, and if not, was it a conscious decision to avoid that, or as a devout transnationalist was it never even a thought?

EH: Well, Contradictions are absolutely OK, as they are conflict only in logical terms… However, soul knows no logic and is still the queen at the table of all human facilities…. And hey! So here we are!!! Already in the thick of the “Seekers and Finders” song!!! “Mind is stuck on survival/ But soul it knows no rival/ In its one and the onlyness/ It is a seeker and finder of W-Hollyness…” I feel that the job of an artist is to be a channel for collective supra-consciousness, to be dealing in raw spirituality, not necessarily get all wrapped up into a panic du jour… All those things will pass.

You took on production duties for the first time with this record. What made you decide to pull down double duty this time around? Was that a challenge for you, and did you seek any outside advice before getting to work?

EH: When you work with great methodists of sound like Andrew Schepps, Rick Rubin, Steve Albini, it’s only a matter of time before you’ll wanna get behind the wheel yourself… You know, at least for curious kid like me.

​S​o​,​ ​I​ prepared this reverend hat for myself, like ​I’​m gonna wed the OG Gogol sound and the science ​I’ve​ learned from all the sonic g​r​and masters​,​ right?​ B​ut​ that all changed when my task became like the one of matador, facing the beast of Gogol collective creativity, so forget about leaving ​the ​studio before midnight…!

​B​ut​​ I loved doing it because every second of so called challenge is in ​f​act a solution. ​I​ love the sculpting process and ​I​ kinda love the brutal self-editing too. ​I​ love going into ​unchartered​ territory. ​I​f ​you’re​ in touch with your inner GPS​,​ any outside advice will be a detour. As a fan of Andrei Tarkovsk​y, I​ took his advise to never take any advise. Almost all of it is detrimental because it doesn’t correspond to your particular life-line…
Perhaps, I’ll never do it again — for it is incredibly time consuming — but I really loved producing this album.

Tell me about “Walking on the Burning Coal”; how did this track come about and what sort of themes are you tackling here?

EH: The theme here is a Rite of Passage, or rather its absence of it in our society… However, it is still necessary. So, it’s about putting yourself through a test and demolition of ego where the soul matures. As you know, generally speaking people divide themselves into young and old souls, but how do they get there? By simply aging or mindlessly clicking like-no like buttons? Fuck no. By using their free will and focus to accumulate necessary experience… a pass into a more composed state, if u will…

Our website’s name actually comes from a Regina Spektor lyric, so you can imagine we’re pretty excited about your duet with her on this album’s title track. Can you talk about that song a little? How did you bring Regina on for that and what was it like working with her on it?

EH: Well Regina is beloved in our band as well. It is a just unique gift for me to have an Eastern European brilliant song-writing friend in New York. And she duets on this track blissfully, elevating its melody to levels I could never dream of really. At [the] recording session we had a bottle of wine and about 18 takes of the song, where she gave her heart and soul to it, and producing many great various moods of the song. In fact, another heartwarming acoustic version of the song resulted from that as well.

The initial idea came about at one of the times when we were reconnecting over shakshuka and borsch between tours, as we do to keep our East Euro bodies and souls going, and it kind of hit me that we still have not sung anything together on stage… At that moment, I was right in the middle of writing an album and realized that this track “Seekers and Finders” is just the right vessel for our mutual energies. Another key factor is that this duet demands not only a beautiful female voice, but a bust-load of experience and an understanding of the pain of life, and I think that our cultural heritage (Russian and Ukrainian), plus immigration trauma and carving out a place for ourselves in English speaking world… that supplied us with the understanding for life. So, enjoy “Seekers and Finders”. But it could also be correctly called “Perseverers Against All Odds”.