Hers is a story about America and how America ends 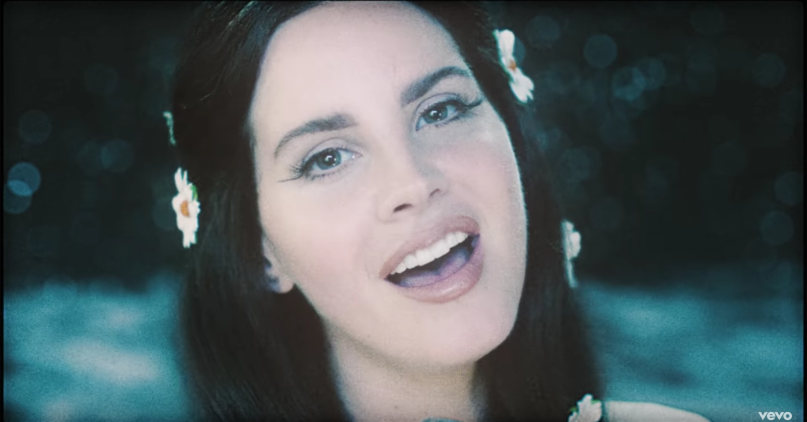 The first few frames of Lana Del Rey’s “Video Games” video don’t show her simpering at the camera in big hair and heavy eyeshadow like you remember. That comes later. The first three seconds, between the chirpy ad for Starbucks Refreshers and the first grainy webcam shot of Lana leaning against a wall, pan across a devastated landscape. Lightning flashes rainlessly from irradiated clouds; debris hurtles through the air; an industrial tower crumbles, its skeleton exposed. Unlike the rest of the video, which adopts the look of old VHS tapes, the image is vivid and clear, almost painterly, like it’s happening now and everything else you see is what came before. For a moment, it blazes across the screen, and then it’s never shown again.

Lana, who releases her fifth album, Lust for Life, later this week, has orbited the apocalypse in her work ever since “Video Games” made her first a blog curiosity and later a major label pop star. In between spats of sentiment and romance, her music and the imagery accompanying it fixate on the violent, the desperate, the doomed. In “Born to Die”, she’s limp and blood-soaked in an impassive man’s arms while fire rages around them both. The camera in “Summertime Sadness” chases young women to their deaths as they jump from high bridges, all the while Lana smolders in clouds of smoke. “National Anthem” reenacts the JFK assassination with A$AP Rocky cast as Kennedy and Lana, paradoxically, as both Jackie O and Marilyn Monroe.

Throughout her videography, Lana harvests symbols of American opulence for use in a slow-burning eschatological narrative. For someone initially accused of being an industry plant, her work has a surprising consistency: Those filters that gave “Video Games” its corroded look persist in her most recent videos, “Love” and “Lust for Life”. Her effects budget has grown, but Lana’s fixations remain undisturbed. Hers is a story about America and how America ends.

A recent New York Magazine feature called “The Uninhabitable Earth” foretells a level of climate-based destruction that would make Cormac McCarthy flinch. Blood will literally boil as parts of the planet grow too hot for human life, and mass starvation and warfare will wipe out the factions of the species sequestered far from the equator. The piece may well exaggerate the research it quotes, as several climate scientists have pointed out, but the picture of impending crises it paints roots deep in the contemporary American psyche. The illustrations accompanying the article are the most telling part: they show fossilized human bones wearing sunglasses and clutching soda bottles. One depicts an air conditioner engulfed in rock.

Plastic deteriorates slowly and it’s supposedly strangling the planet, so it’s easy to imagine a wasteland studded with mass-produced trinkets. Sunglasses, soda, A/C: these are symbols of excess, products we don’t necessarily need but consume for comfort or pleasure all the same. Their use also hastens the very warming of the planet producing the discomfort we’re trying to assuage, as though global warming were an infection we can’t help picking at.

Lana, too, fills her work with images of American excess. In her 30-minute short film Tropico, released in conjunction with her Paradise EP, she shares the Garden of Eden with John Wayne, Elvis, Marilyn Monroe, and Jesus. They all look like impersonators, but she prays to John like he’s God all the same. Playing Eve, she bites the fruit of knowledge and falls from her earthly paradise into the world of organized crime and sex work. She helps her boyfriend rob a boardroom full of businessmen who have hired a pair of strippers for a birthday party; wearing a blue veil like Mary, she cries and asks John Wayne for forgiveness.

Twenty-first century culture can often feel like little more than a digestion of 20th century culture. From the millennium’s first years, bands like The White Stripes and The Strokes have mined the recent past for rock ’n’ roll’s nostalgic glow, but few acts relish their retrospection so thoroughly as Lana. Her music sounds old, and she embellishes it with references to Lou Reed, James Dean, and Phil Spector. She doesn’t simply cite the past; she frames it in a new light, weary with the knowledge that the world her icons symbolized is the same world our current presidential administration is eager to get back to, a world propelled by violence just below its waxed veneer.

“Deploying the aesthetic of white America tends, necessarily, at best, toward suicidal self-loathing,” writes Hannah Black in an essay on Lana for The New Inquiry. “To achieve anything of note with this repulsive material, you have to take the only reasonable course and wish yourself dead.” Everything that once felt like the advent of a new future — for a certain subset of Americans, anyway — has now become symbolic of the absence of any future at all. Cars, television, rock ‘n’ roll, mass production, and Pepsi-Cola putrefy in light of America’s rapid clip towards death.

In his 2013 essay “Learning How to Die in the Anthropocene,” Roy Scranton grapples with the effect of imminent, widespread catastrophe on the individual human life. “In the epoch of the Anthropocene, the question of individual mortality — ‘What does my life mean in the face of death?’ — is universalized and framed in scales that boggle the imagination,” he writes. “What does human existence mean against 100,000 years of climate change? What does one life mean in the face of species death or the collapse of global civilization? How do we make meaningful choices in the shadow of our inevitable end?”

So far, he argues, the answer is we go on living like nothing’s wrong:

“The human psyche naturally rebels against the idea of its end. Likewise, civilizations have throughout history marched blindly toward disaster, because humans are wired to believe that tomorrow will be much like today — it is unnatural for us to think that this way of life, this present moment, this order of things is not stable and permanent. Across the world today, our actions testify to our belief that we can go on like this forever, burning oil, poisoning the seas, killing off other species, pumping carbon into the air, ignoring the ominous silence of our coal mine canaries in favor of the unending robotic tweets of our new digital imaginarium. Yet, the reality of global climate change is going to keep intruding on our fantasies of perpetual growth, permanent innovation, and endless energy, just as the reality of mortality shocks our casual faith in permanence.”

It’s hard not to paint American culture and its various calamitous exports as the villain in this global saga, whose victims already rank in the millions and are unlikely to be American themselves. In her music videos, Lana implicates luxury and freedom as vessels for death. Vintage cars burn midnight oil in “Burning Desire” while she sings to an empty blood-red cabaret. In “High by the Beach”, Lana wards off a paparazzo hounding her vacation by firing a grenade directly into his helicopter.

The natural end of the life Lana paints around herself in her videos is akin to a mass cultural suicide, and for more than five years she’s framed it as such. Many of her videos, like “Freak” and “Lust for Life”, include shots of the earth from space as though they’re part of a nature documentary tracking the shrinking of the ice caps. “Lust for Life”, perhaps ironically, closes on a shot of the Earth lighting up a peace sign on its surface, a nod to the hippie iconography of the 1960s and all the good it did to keep the United States from perpetual war. Her dramas tend to hone in on a few characters, usually just her and a man or three, but the scale of their ramifications encompasses the Earth as a whole.

Lust for Life is supposed to be Lana’s most optimistic album yet, but even her hope is couched in doom. Her lyrics revolve tautologically — “a lust for life keeps me alive” — as though wanting something were enough to sustain it indefinitely. The desire is real, and so is the fear that the desire will fail.

In the video for “Love”, her new album’s first single and one of her loveliest songs to date, Lana’s imagery takes a turn for the fantastic. It starts off pedestrian enough, showing kids canoodling in muscle cars beneath a summer sun. “You’re part of the past, but now you’re the future,” Lana sings, and soon enough, the kids have breached the Earth’s atmosphere, cruising in their vintage cars all the way past the sun to another planet. They leave the exhausted Earth behind and start over somewhere new.

“Learning How to Die” suggests the only feasible individual tactic for dealing with the threat of climate change is to learn acceptance. “The biggest problem we face is a philosophical one: understanding that this civilization is already dead,” Scranton writes. “The sooner we confront this problem, and the sooner we realize there’s nothing we can do to save ourselves, the sooner we can get down to the hard work of adapting, with mortal humility, to our new reality.”

“Sometimes love is not enough,” Lana sings on that early prophetic track “Born to Die”. She’s right. What we do and what we want as individuals does not often bleed over to the behavior of a culture as a whole. How does the individual carry responsibility for the choices of an entire society? Where does choice end and weather begin? Lana sings a lullaby for American twilight as we fall asleep in a car that’s about to slip off the road, unsure whether we’ve even been driving.