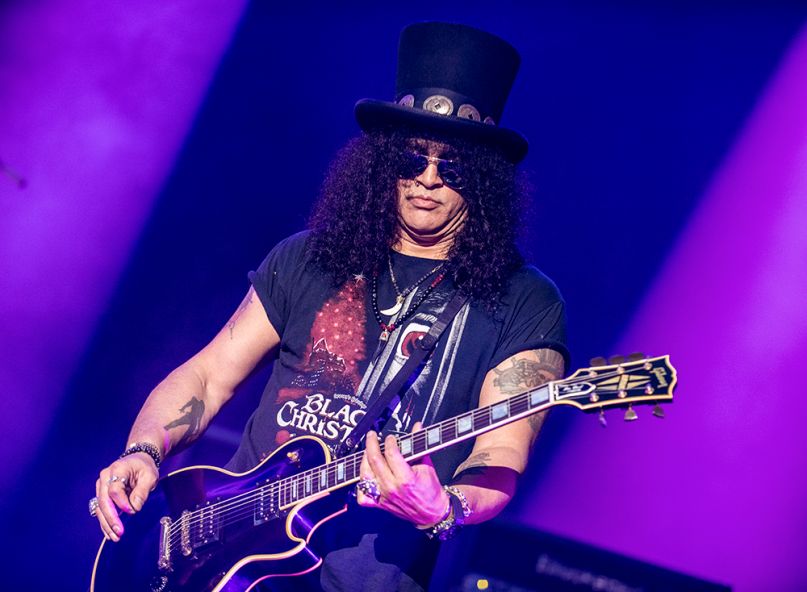 You can hate Guns N’ Roses, but you can’t hate Slash.

Born Saul Hudson, the British-American guitarist has long been a hero of rock ‘n’ roll, conjuring up all sorts of boozy fantasies with his blistering riffage. With GNR, he inspired a legion of devout followers, and while most of them have tragically reduced the value of leather apparel, no one’s ever really questioned their fanaticism.

Why should they? For Christ’s sake, have you ever listened to Appetite for Destruction? It’s a hard rock bible, from the moment you step into the jungle to the second you leave on a rocket with the queen. And seeing how Axl Rose’s raspy yowl has forever been inimitable, it’s really Slash who has been the populist leader of the group.

That’s not a bad thing: Ever since he joined the LA misfits back in June 1985, he’s been an iconic force, slinking around the stage like a modern-day Keith Richards, only with a better wardrobe. He makes it look so goddamn easy, too, what with those shades, that top hat, and that dangling cigarette on his lip — the Kanye Shrug before Kanye.

Believe it or not, but it’s been 30 years since GNR first released their diamond debut, which means we’ve been living with songs like “Welcome to the Jungle”, “Sweet Child o’ Mine”, and “Paradise City” for three long decades. Think about all those college parties, those traffic jams, those football games … it’s like they’ve always been there.

It’s because he’s Slash, and that’s been good enough for everyone.