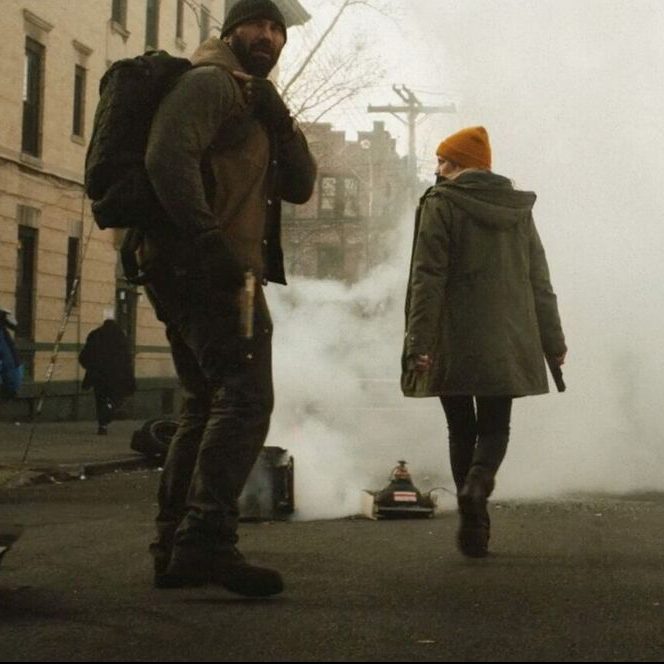 Bushwick begins with a hook that might have felt luridly exploitative when the film was produced, and now achieves an uncomfortable kind of realism. One morning over the titular Brooklyn neighborhood, as people commute to work and go about their lives, helicopters cycle over the city. A series of lurid shots frame the modest corner of New York City as the background to an assemblage of guns and boots and tactical gear. As those choppers grow ever closer, Lucy (Brittany Snow) and her boyfriend are headed out of a subway car to meet her parents. It’s weird to them that the station platform is completely empty, but these things happen sometimes. It’s weirder when they get to the turnstiles, and the station remains vacant. By the time a man stumbles down the steps of an entrance, screaming and lit ablaze, the eerie quiet has already given way to full-blown terror. And then, to far worse.

Cary Murnion and Jonathan Milott’s dystopian action thriller imagines a modern civil war from the ground level, and if it never fully realizes the horrors of its prescient setup, it’s nevertheless effective in fits and starts. As Lucy takes to the streets, unarmed and confused and terrified in equal measures, violence breaks out all around her. Armored figures roam the streets with guns and zip ties, rounding up and/or killing (usually the latter) anybody in their path. Buildings are raided while scared individuals sprint through the streets, attempting to find cover before they’re killed on sight. As the hazards mount, from the faceless mercenaries to the freewheeling exchanges of gunfire to the brutality of random passerby, Lucy becomes increasingly lost. That is, until she’s saved from a group of would-be rapists by Stupe (Dave Bautista), a janitor with an unusual aptitude for hand-to-hand combat.

From its lurid early scenes onward, Bushwick walks a razor-thin line between Carpenter-esque political nihilism and outright exploitation. It’s a grim piece of filmmaking, to such a point that the very few attempts at one-liner humor throughout fall entirely flat, although Snow and Bautista deliver them with the seeming understanding that they’ll do just that. As the unlikely duo wander through the neighborhood in search of salvation, whether in other people or in the vague rumors of a U.S. military extraction, the bodies pile up and Bushwick makes its messy case for the walking terror of fellow countrymen. It’s a particularly loaded film in the current climate, what with armed Nazis openly marching on American streets, and there’s a certain impact to the film’s vision of how quickly a siege could theoretically take place, even if it’s far too modest an affair to truly interrogate how such a thing could happen at any length.

This is a nasty piece of speculative action cinema above all things, and it’s in that tendency that Bushwick struggles to maintain its momentum even at a taut hour-and-a-half. Murnion and Milott stage the majority of the film in a series of protracted “one-shot” sequences that ultimately prove more showy than effective, the occasional power of their stagings undercut by extended trips into pitch-black hallways, or lingering tilts into lamps or out windows that solely exist to keep the shot going. They offer the affectations of Birdman without any of the self-aware commentary, attempting to augment what’s otherwise a topical riff on The Warriors in ways that add little to the mix. (Likewise, Aesop Rock’s work on the score is appropriately nervous, but between his trilling synthesizers and the film-opening shot of Coney Island, the film moves well beyond homage and into the realm of biting Walter Hill’s classic grimy aesthetic.)

The camera often follows Snow from a slight distance, mimicking the choreography of a reticule-free third-person shooter even as it attempts to find meaning in its occasional hand-wringing about the simultaneous necessity and danger of guns throughout. Murnion and Milott achieve the odd memorable image throughout, whether in the smoke-bathed climax or a key moment in a laundromat that deftly frames Bautista’s hulking figure aside Snow’s comparatively petite one, but the video game style of so much of Bushwick’s onscreen action harms more often than it helps. For a film so clearly interested in establishing the dour stakes of its universe, stretches of it bear a striking resemblance to the anonymous violence of the Call of Duty games the film invokes aloud at one point. There’s a point there, but it gets muddled beneath the endless, cacophonous gunplay.

This approach does a disservice to the film’s game and capable leads, tasked with all manner of clunky expository dialogue. For a film that prefers its storytelling on-the-fly, Bushwick slows down far too frequently to work through its paces, particularly in a leaden mid-film sequence that sees Stupe interrogate a captured soldier; the young man proves remarkably open to explaining the film’s stakes at length after just a few punches. In keeping with the aforementioned video game motif, the film unfolds in the manner of the most formulaic games: a few people are shot, a character is introduced, the group moves through more gunfire, and their successful transition from points A to B triggers another “cutscene” before the next fit of action erupts. This isn’t to say that these stylistic flourishes couldn’t be used effectively, but Bushwick saves most of its biggest revelations for way beyond too late for them to amount to much of anything.

That said, Snow and Bautista both do engaging work, even if they’re respectively saddled with the stock roles of the imperiled young charge and the stoic heavy with secrets of his own. The film takes some glaring logical leaps with their characters (Snow evolves from a novice with guns to an expert marksman at a speed that’s preposterous even in an action movie of this ilk), but Lucy and Stupe are a compelling enough pair that the film will leave you wanting more from both, particularly in the wake of its bleak and jarringly abrupt finale. Bushwick ably captures the immediacy of war, and its unrelenting horror, but in the service of too little. War is hell, even in Brooklyn, but it’s only good for cheap thrills as presented here.