A harrowing true-life account of procedural injustice, slightly diminished by its lack of scope 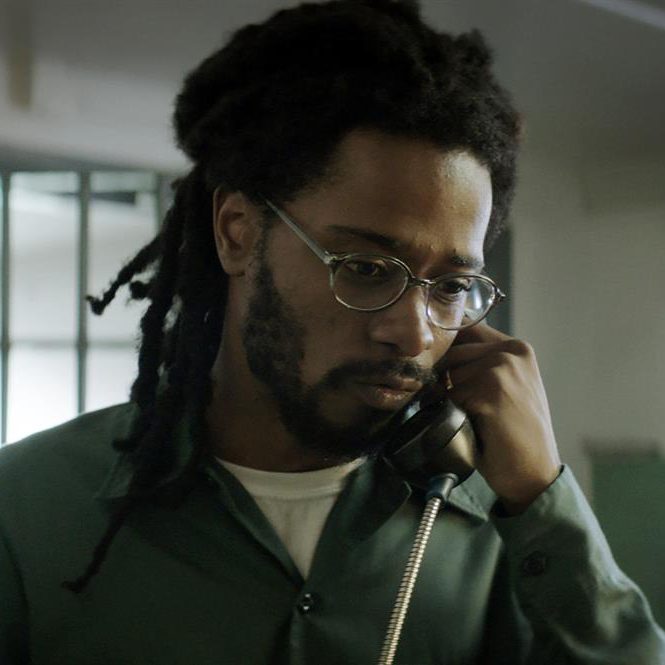 On August 10, 1980, 18-year-old Colin Warner was picked up by police for the murder of a young man in his New York neighborhood of Crown Heights – a murder that Colin didn’t commit. An 18-year-old Trinidadian immigrant with little understanding of why he was there, Colin was immediately thrown into the NY prison system. He would remain there for 21 years, only released after decades of amateur detective work by Warner’s best friend, Carl King, who would enter the legal field for the sole purpose of proving Warner’s innocence.

Crown Heights is the dramatization of Warner’s story, the second film from writer/director Matt Ruskin (Booster), starring Lakeith Stanfield (Short Term 12, Get Out) as Colin. Tracking the story from Colin’s arrest in 1980 to his eventual release in 2001, Ruskin takes a dreamlike, meditative look at the slow-moving gears of criminal justice, and the havoc it wreaks on people as they’re denied their basic human rights – all based on the color of their skin.

It’s a harrowing real-life story of the systemic injustices baked into the American justice system, and the Herculean effort it takes to correct even one instance of wrongful incarceration. Unfortunately, the film eventually obsesses over the factual elements of the case to such a point that it allows for less of an emotional window into the men driving the story – Colin and Carl (Nnamdi Asomugha, who also produced the film).

Colin’s stay in prison makes up the majority of Crown Heights’ runtime, as we see the days tick by, replete with beatings, isolation, and inter-prison politics. To stave off the loneliness of prison life, Colin clings to memories of birthday cakes and running in circles around his backyard, all presented through a muted haze by Ruskin’s floating, deep-focus photography to give the impression of fading memories. Early on, it’s made clear that Colin will find no friends even in prison; his one attempt to ally with a fellow Trinidadian inmate lands him in trouble with other prison gangs, forcing him to step away for fear of further retaliation.

This is a difficult story to tell on film, to be sure, but 94 minutes hardly seems like enough time to properly convey the torment and loneliness of two decades behind bars. For the audience, the two years Colin spends in solitary confinement after lashing out at a prison guard in frustration is barely felt; the next time we see him, years have passed and he’s already back in gen-pop. Each time he wakes up, Colin’s plea is heard in voiceover against a black screen: “Please don’t let it be a cell.”

As the years go by, Ruskin works in flashes of news footage from each era, complete with the politicians of the day (Reagan, George H.W. Bush, Clinton, even New York Gov. George Pataki) giving boisterous ‘tough on crime’ speeches. It’s an intriguing way to illustrate how quickly the years pass in prison, and it offers a Cliff’s Notes version of the social factors that land people like Colin in incredible trouble: mandatory minimums, the death penalty, and so on. Unfortunately, breezing through the years in this way leaves the audience little time to get to know Colin, and Stanfield little to do in his role.

Thankfully, Stanfield is one of the most exciting young actors working today, and he manages to work wonders even in the limitations of Colin’s circumstances and the film’s abbreviated telling of his story. With his pleading eyes peering past his long dreadlocks, Stanfield strikes a deeply sympathetic countenance. He channels Colin’s rage at his injustices first into desperation, then anger, and then into despair as even his efforts to make the most of his prison time are stymied by racist parole officers. The disbelief and frustration he feels at every corner is palpable.

Parallel to the story of Colin’s slow descent into nihilism in prison, however, is King’s relentless effort to prove his friend’s innocence, and this is where Crown Heights picks up a bit of steam. From Colin’s initial arrest, to his trial, to the myriad appeals and investigations he conducts over the decades, Asomugha’s King is respectably steadfast. His single-minded pursuit of justice for Colin has consequences, from his personal life to his marriage, but King becomes a compelling advocate for Colin on the other side of the prison walls. In fact, the film’s third act all but abandons Colin in favor of tracking Carl’s efforts to close in on the truth, with the help of well-meaning white lawyer William Robedee (Bill Camp). The pace quickens considerably in these sections, but Ruskin’s chronicling of the legal side never rises above its generic procedural approach.

As a Big Message movie about the racism inherent in the criminal justice system, Crown Heights succeeds admirably enough. As an effective drama, however, the film is frustrating in its unwillingness to engage with its characters beyond its broader strokes. After a while, one can’t help but see the film as a point-by-point retelling of the This American Life story that inspired Ruskin to make it, with a few flourishes of presentation thrown in for the sake of universality. Stanfield and Asomugha’s engaging performances notwithstanding, there’s a narrative weariness to Crown Heights that fails to keep up with films like Get Out and Whose Streets?, films of recent vintage that managed more potent investigations of racial injustice in America.