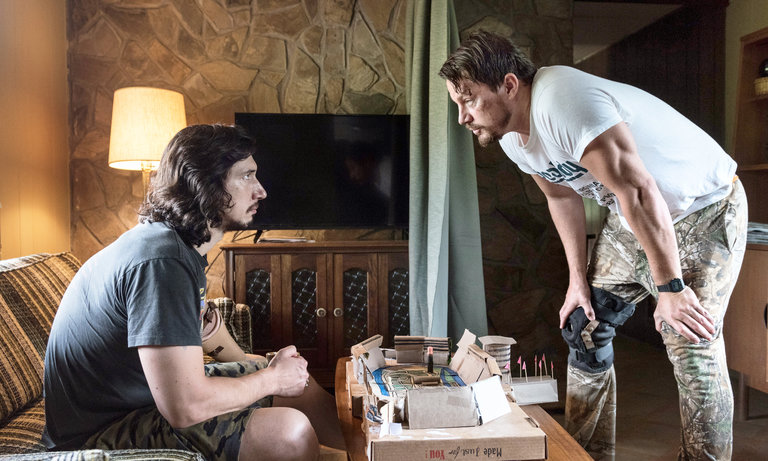 “Do you think we’re destined to repeat the past?”

Logan Lucky is about a great many things, far more than it lets on at first. By its end, Steven Soderbergh’s “return” to filmmaking (Behind the Candelabra was just four years ago, after all) winds up touching on the American Dream, the daily struggles of the modern working-class citizen, the ineptitude of amateur thieves, the cunning of those who’ve had to learn how to survive in the world, the value of selfless acts of charity, the difficulties of looking out for one’s family, NASCAR, and a heist so meticulously arranged that it’d put Danny Ocean’s crews to shame. But that line, delivered late in the film during a barroom conversation, captures the spirit of Soderbergh’s wild caper in microcosm. People can change; it’s how much they can change that’s left up for debate.

But let’s not bury the lede too deeply here. Logan Lucky might be a deceptively shrewd film from one of cinema’s most deceptively shrewd auteurs, but as Soderbergh goes, this is pitched far closer to the freewheeling anything-goes nature of Magic Mike XXL (which the director didn’t helm, but did shoot under a pseudonym) than the graver pop deconstruction of Magic Mike. The Logan brothers, Jimmy (Channing Tatum) and Clyde (Adam Driver), are natives of West Virgina’s Boone County and perpetually looking for a way to improve their circumstances. Clyde may tend bar at a preferred local dive, and Jimmy may have a decent job working in construction, but these things are hardly guaranteed. When Jimmy’s pre-existing leg injury gets him fired over liability concerns, he’s left in the lurch, expected to hold up his end of parenting his precocious daughter Sadie (Farrah Mackenzie) without much in the way of a backup plan.

Before long, Jimmy has one, if not a particularly noble one. Before his termination, Jimmy’s crew was in the process of tunneling beneath the Charlotte Motor Speedway in North Carolina, one of the more famous NASCAR tracks in the country. The Speedway moves its money through a series of vacuum-sealed tubes for the sake of expedience, leaving it ripe for the robbery. As illustrated in a 10-point list on Clyde’s fridge (20% of those points offer the helpful reminder that “shit happens” during such an attempt), the Logans could pull off the kind of casualty-free con that would leave both set for life. Soon their sister Mellie (Riley Keough) is roped into their plot, but they still need somebody with the skillset necessary to bring together a heist on the level of the one they’re planning.

Logan Lucky is full of terrifically weird character performances, but the weirdest of them all (and the most engaging) sees Daniel Craig bleach his hair and adopt a regional half-drawl as Joe Bang, a top-notch thief with less than six months left on his prison sentence. Along with his eccentric brothers (Brian Gleeson and Jack Quaid), Joe is quickly roped into the Logans’ hundred-point plot, as much because of his interest in getting a day away from jail to enjoy a cold beer as any sort of fiscal concern. Craig adopts the deliberate, hyper-enunciated articulation of the south-southeastern U.S. to hysterical effect, as Soderbergh uses the actor’s famed baby-blue eyes to emphasize Joe’s menace, even as Craig turns him into what may be the funniest character in the entire film.

The majority of Logan Lucky tracks the buildup to and execution of the film’s central hustle, which means that Soderbergh and first-time screenwriter Rebecca Blunt (who may or may not exist, depending on who you believe) are tasked with building the characters through on-the-fly storytelling as the film whips by at a brisk pace. Among its many virtues, Logan Lucky might be the fastest-moving two hours you’ll spend in a theater all summer, and it’s a measure of how well-written and staged it is that you’ll only notice this once it’s over. This allows for one delightfully organic interaction after the next, from Jimmy and Clyde’s brotherly sparring to Joe’s increasingly harried concerns about the heist to Millie’s fierce, gum-chomping determination to hold the whole thing, and their family, together. (Keough’s steely deadpan delivery is just one of the film’s numerous performance highlights, adding substantial depth beneath her riot of mismatched neons.)

Logan Lucky sprawls in so many directions that, perhaps inevitably, not all of its digressions land. An exchange between Jimmy and Sylvia (Katherine Waterston), a local pro bono doctor, is kindhearted but recedes into the background to a disappointing extent as the film goes on. Likewise, Seth MacFarlane has a handful of funny line readings as an addled British racing team owner, but his turn is particularly cartoonish even in a film rife with cartoon characters. Given that the general importance of both he and his star driver (Sebastian Stan, enjoyable in brief) can be debated even by the film’s end, it’s hard to argue for their relevance to the grander story; the same could be said of Hillary Swank’s federal agent, who adds yet more engaging strangeness to the film, but right around the point at which Logan Lucky has so many disparate moving pieces in play that it’s tough to argue for the character’s necessity.

But every actor onscreen is granted some good-to-great material to chew on, however brief their appearances. The best stuff is saved for the film’s core foursome, however, and even if Logan Lucky were nothing more than an opportunity for A-listers to do some oddball character acting, it’d make for a full evening’s entertainment on that basis alone. Tatum continues to distinguish himself as an actor of unexpected range, finding beats of earnest loneliness and self-imposed pressure beneath Jimmy’s goofy exterior. He’s a canny type, a man who knows how to bilk the system after a lifetime of living just outside the responsible boundaries of the law. Meanwhile, Driver is the film’s other standout beyond Craig; having lost half an arm in the Iraq War, and some time in his childhood to juvenile custody, Clyde declares that “my life of crime is over,” as Driver adds an extra half-second between each word to fantastic comic effect. Yet he’s soon pulled in all the same, by Jimmy’s magnetic personality and by his deep sense of obligation to family. Their rapport makes for some of the film’s funniest material, as well as some of its more poignant moments.

While Logan Lucky gives off the impression of a shaggy character-based comedy, such an assessment shortchanges how deliriously clever it is, a perfect match of narrative with its unassuming would-be thieves. As much as anything, it’s one of the best heist films of recent vintage, employing the director’s signature sleight-of-hand storytelling alongside its whip-smart punchlines. A major portion of the Logans’ ruse involves breaking Joe Bang out of prison, which leads to one of the single funniest scenes in any 2017 film, as the inmates make a very specific and pop culturally savvy set of impossible demands to stall for time. An early conversation, set at a county fair, says more than it seems to say. Even Jimmy’s film-opening discussion with his daughter contains unexpected multitudes; as he muses over John Denver’s “Take Me Home, Country Roads,” he explains that “I like the song because of the song. Guess I like if there’s a story behind it.”

That ethic better explains Logan Lucky than any of its unassumingly loquacious inhabitants ever could, or would. Soderbergh clearly has a blast playing in a sandbox full of movie stars once again, but the film works in both ways. It’s the kind of wholly fun, satisfying late-summer fare that audiences will crave as the season winds down on its face, but like much of the director’s more recent output, it’s operating on several more thoughtful levels at the same time. It’s a film about “southern”/rural American culture that astutely captures its tackier details without ever condescending to it, and a comedy that understands the value of a punchline landing from out of nowhere, that a well-timed joke is always funnier than the most elaborate setpieces. It’s kindhearted, and wistful in its way, as Jimmy’s refusal to buy a smartphone dovetails with Soderbergh’s clear affection for every single one of his offbeat characters and their older-fashioned lifestyles.

It’d be irresponsible to say too much more about Logan Lucky, as the blindsiding surprises it offers are half the fun. But for Soderbergh to make a film like this, after several well-calibrated experiments in icy detachment, is one of the best surprises of all. It unspools at a breakneck pace, its protagonists putting together every piece even as it’s nearly impossible to tell that they are. And in its craft, it’s a film that nicks the auspices of so many blockbuster tales of thievery and reassembles them in ways both familiar and new. It’s a film of incidents, and even if not all of its parts amount to much after a while, it’s such a pleasure to watch that it’s unlikely you’ll be too concerned with such things. Logan Lucky is a treat because it’s a treat, and the fact that there’s a story behind it is merely the cherry on top.