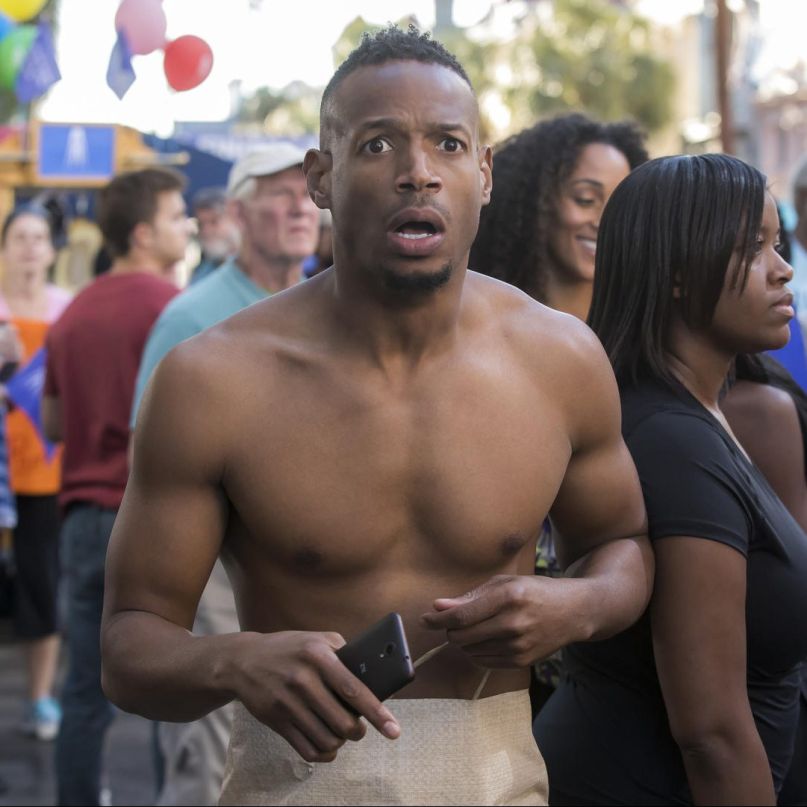 No, wait, please don’t close that tab. This is going somewhere.

Butts are round, essential to the body, and yet rarely seen. They make farts, and have a great many hilarious nicknames and features. And on top of all that, in Naked, they act as comic headlights for various feelings of exposure, alarm, and perhaps even pride.

Plus, Marlon Wayans has a great ass. The enfant Wayans sibling shakes his money-maker something silly in Naked as its lead. The titular nudist, as it were. And it’s odd to admit, but some of the calculated rear-end nudity is actually funny here. He expertly reveals his rump as he finishes a marathon nude in public, alone and breezing in the street after hiding among the crowd. Wayans’ butt becomes the catalyst for sight gags involving fluffy robes, bikini bottoms, and other hastily selected apparel. Some carefully constructed photography allows his derriere to act like a punchline. It’s a tool. A crass one, but one well-used all the same.

To round out this discussion, consider Naked, a playful and fast-acting romantic comedy. Sure, it may be a little rote, and even thrifty, but it offers more than enough yuks to earn its way into your Netflix queue, and it may even warrant the question, “why aren’t the Wayans family, particularly Marlon, a bigger deal in 2017?”

Wayans is Rob Anderson, a young man perfectly content with being a hip academic-dude who shoots the shit about Salinger with prep school kids. He’s so cool that he scoffs at the prospect of a full-time position, because he’s got to catch a plane. Rob’s getting married to Megan (the unsung and affectionately patient Regina Hall).

But here’s the big pickle: Rob’s also trapped in a ceaseless time warp that constantly drops him, nude, inside the elevator of his Charleston wedding venue, and it won’t stop until he nails his big day by impressing the bride, the father-in-law, the yuppie ex, the fault-finding best friend, cops and bikers, pastors and runners, Brian McKnight in a glorified cameo, and on and on. It’s the typical zany time-warp comedy, done decently enough.

But first, the bad. To be blunt, Naked does give off an impression of déjà vu, and looks borderline cheap at times. Liar, Liar and Groundhog Day should ring distant, but familiar bells. (And to wit, this is a remix of an already existing film, Sweden’s Naken from 2000.) Naked possesses some of the broader strokes of ‘90s comedies: one-note villainy, frumpy orchestral music, and easy one-liners. And worse, bad dialogue. “What is Megan’s successful ex-boyfriend doing here?” the best man asks at one point.

But those faults are forgivable after a point. Naked, from Wayans collaborator Michael Tiddes (director of last year’s comparatively limp spoof Fifty Shades of Black), shows a leveling-up for the team. It’s usually focused, and fairly energetic. While its repetition concept is as old as a grandfather clock, Naked has the courage of its modest convictions. It’s a comedy of escalating frustration, with room for random acts of madness, adequate screwball humor, and even a little tenderness.

The schedule goes something like this. Each day begins with Wayans, bare-assed in an elevator, and then…

Day 1: A towel whip at the cops, a run in the streets, and the delivery of the general rules and conceit. RESET.

Day 2: Rob is called pathetic by Megan’s maid of honor (Eliza Coupe), and he finds clothes in the form of a bikini. He’s legitimately hurt, but the bikini thing makes for surprising physical humor.

Day 4: Rob readjusts, and steps out naked as a jaybird, swinging with pride. This goes worse than the first few attempts.

Day 5: Rob steals what appears to be a teenage boy’s bowtie outfit, and it fits terribly. But this time he makes to the altar! Megan’s father (Dennis Haysbert) hates it, and throws Rob out.

The days turn to montage – multiple forgotten pamphlets, forgotten vows, and forgotten rings. But each offers the chance for choose-your-own-adventure comedy. Rob’s vows suck, so he sneaks into other weddings to copy/paste better words. One day Rob is getting pancaked by bikers, and the next, he’s suddenly best friends with them. Rob thinks he’s getting close, and then out of nowhere, a pigeon lands in the aisle. He took the vows, rings, and booklets in stride, so naturally, Rob loses his mind over a damn bird. It’s a well-placed gag that shows how random a man’s breaking point can be.

Fires. Police wisdom. Heart-to-hearts. Drugs. The choppy but sweet use of The Supremes’ “You Can’t Hurry Love.” Put it all together, and you have tons of ways to watch a wedding implode. Call it try-and-try-again comedy, with enough speed and clever editing to prove that if you tell the same joke a hundred ways, it’ll be funny at least half of the time. To Naked’s credit, the humor successfully pivots and resets with occasional surprises. It provides ample opportunity for its game lead.

Admittedly, Wayans is a familiar brand of comedy protagonist. Always in a rush, winging it, self-centered and so on. But in Marlon’s flailing and ebullient hands, the character comes off less grating than one might think. It’s in his smirk, his honest eyes, and his elastic voice and expressions; even his zingers exude a chummy “s’all good” sort of feel. (When Rob’s best man asks how he looks, Rob retorts, “like one of the Fat Albert kids went to prep school.”) Wayans makes Rob a cliché worth hanging with. He can panic while sedated in an ambulance quite well. He can even charm his finance, with his puppy-dog eyes and stamina. Wayans delivers a reminder of how fun it is to watch an actor go crazy for the sake of a gag. And in a strange way, he recalls the legacy of the Wayans’, rubbernecking silly and subversive humor even as Naked ultimately lands on a kinder, gentler tone.

When there’s no more room left in multiplexes, the low-budget comedies will walk the Netflix. Barely marketed. Primed for low exposure in the dog days of summer. Unabashedly titled for cheap views. But Naked could warrant a peek all the same.