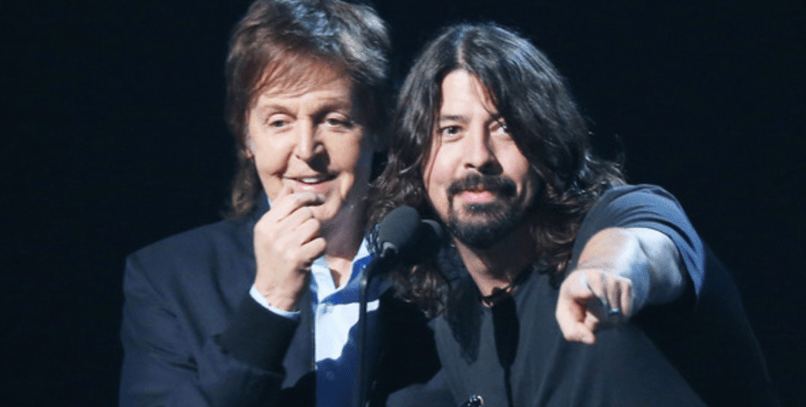 Foo Fighters are releasing their new album, Concrete and Gold, in September, and guest appearances on the record have been trickling out in advance. So far it’s been revealed Boyz II Men’s Shawn Stockman sings on the title track and The Kills’ Alison Mosshart appears on the already debuted “La Dee Da” as well as “The Sky Is a Neighborhood”. Now, frontman Dave Grohl has upped the ante by revealing he landed a Beatle (!) on the album he’s described as “Motorhead’s version of Sgt. Pepper’s… or something like that.”


(Read: Every Foo Fighters Song from Worst to Best)

During a recent interview with ET Canada (via Reddit), Grohl divulged Sir Paul McCartney stepped behind the drum kit for one of the tracks. “Paul McCartney plays drums on one of our songs,” Grohl said. “He’s a pal. We’ve known him for a long. He’s great. He’s the most wonderful person in the world. He’s a great guy.”

“He hadn’t even heard of the song,” the band added. “He comes in and Dave picked up an acoustic and showed him real quick. He sat on his special drum set that his tech set up for him. I sat there with a drumstick conducting. He did two takes.”

McCartney and Grohl previously joined forces on “Cut Me Some Slack”, alongside Nirvana member Krist Novoselic and Pat Smear. The song was first performed at the 12-12-12 benefit concert by the four, and was released in December 2012. Grohl also backed McCartney for his Grammys performance in 2009.

While McCartney is obviously a huge name, the rock legend isn’t “the biggest pop star in the world” Grohl first teased during a June interview with BBC Radio 1’s Annie Mac. He declined to reveal the mystery guest’s name during a recent Rolling Stone profile — aside from shooting down guesses of Adele and Taylor Swift — but provided  a little more information.

“It was sort of towards the end of the album and this person came up and said, ‘Man, I’d really love to sing on your record,'” Grohl shared. “I looked at [producer] Greg [Kurstin] and said, ‘OK, come in tomorrow and we’ll figure something out.’ So we found a backup part for this person to sing and we decided we were gonna make it our own dirty little secret and see if anyone can figure it out.”

“I’d be amazed if anyone can really figure it out,” he said. “But it was great and this person’s been around a long time. And I think I’ve met this person maybe a few times, but I’d never spent time with this person, and we had a blast together. Really fucking fun. And [he or she is] very talented – more so than I ever knew. But, of course, I fucking ran my mouth off; now I have to answer to it every time I pick up the telephone and I’m like, ‘Fuck! I shouldn’t have said anything.'”

In June, Foo Fighters shared “Run”, the lead single from Concrete and Gold. They also debuted “La Dee Da” with Mosshart during several of their European Festival sets, along with “The Sky is a Neighborhood”, “Sunday Rain”, and “Dirty Water”. The follow-up to 2014’s Sonic Highways and its 2015 companion EP, Saint Cecilia, hits stores on September 15th through Roswell Records/RCA Records.

Along with a new album, Foo Fighters have lined up a massive US tour as well as CAL JAM, an epic one-day festival featuring Queens of the Stone Age, Liam Gallagher, and The Kills.