St. Vincent discusses the “sex and drugs and sadness” of her new album 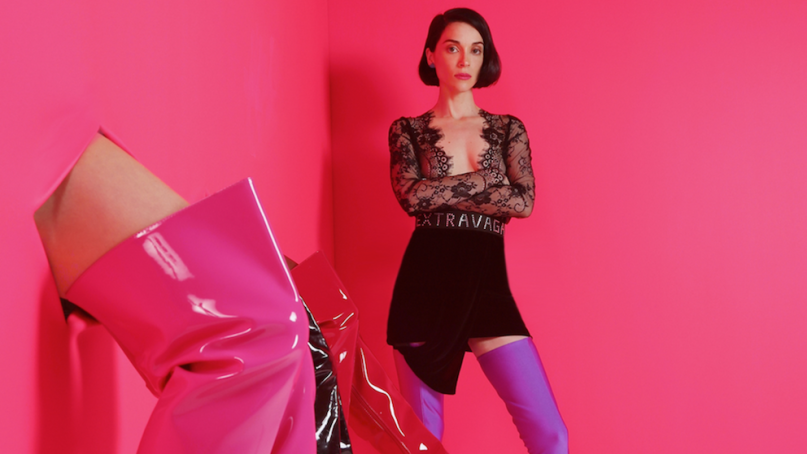 Over the weekend, St. Vincent debuted a new song from her upcoming record, “LA”, during a performance in Tokyo. She also discussed the yet-untitled release with The Guardian, and now has gone into even deeper detail for a new profile in The New Yorker.

Going into the writing of the new record, St. Vincent was coming off her acclaimed self-titled album, a record that brought her more public attention than ever before. As a counterbalance to that, she entered what she called her “monastic fantastic” phase, a sober and solitary life living out of the Marlton Hotel in Greenwich Village while she recorded at Electric Lady Studios. There, she worked with producer Jack Antonoff, whom she connected with over a dinner in Los Angeles. “She was very open about the things in her life,” said Antonoff about the dinner date. “That’s what I was interested in. Continuing to reveal more and more. I said, ‘Let’s go for the lyrics that people will tattoo on their arms.’”

That said, the artist aka Annie Clark cautioned against considering her new songs too autobiographical. “You couldn’t fact-check it,” Clark said. As such, her new single “New York” shouldn’t be interpreted as being about her ex-girlfriend Cara Delevingne or David Bowie or anyone in particular. It’s a composite,” Clark said, adding “That’s just a sexist thing, ‘Women do emotions but are incapable of rational thought.’”

For example, an unnamed song with her favorite lyrics (“Teenage Christian virgins holding out their tongues/ Paranoid secretions falling on basement rugs,” or, “Remember one Christmas I gave you Jim Carroll/ Intended it as a cautionary tale/ You said you saw yourself inside there/ Dog-eared it like a how-to manual”) is about an old friend/flame named Johnny who tries to get Clark to financially support him. When asked whom Johnny was, she responded, “Johnny’ just Johnny. Doesn’t everyone know a Johnny?”

Another song, “Pills”, is about how Clark “was trying to hold on,” during some dark days after the relentless touring around St. Vincent. Clark recalled, “I didn’t have coping mechanisms for tremendous anxiety and depression. I was trying to get through pharmaceutically.” You might think the song is about her split with Delevingne, but the model actually sings part of the hook: “Pills to grow, pills to shrink, pills, pills, pills and a good stiff drink/ pills to fuck, pills to eat, pills, pills, pills down the kitchen sink.”

The record is set for an unspecified fall release, but there may already be a second version in the works. After the masters were approved, Clark and composer/pianist Thomas Bartlett recorded a stripped down version of the album front-to-back using just voice and piano. “Now I’m done with my emotional anorexia, my monastic fantastic,” she said. “It’s so good to just play music.” She performed this version for a group of friends that included David Byrne, Sufjan Stevens, and Joan As Police Woman.

Clark went on to describe the marketing plans for the record, something her creative director Willo Perron said would again focus on St. Vincent’s persona as “both absurdist and sexual. Sultriness but in a New Wave character.” That includes cover artwork that may feature model Carlotta Kohl, Clark’s research assistant, sticking her head through a pink scrim so that all you see is her legs and butt clad in hot-pink tights and a leopard thong bodysuit. “This is not my ass,” Clark said. “This is my friend Carlotta’s ass. Isn’t it a nice ass?”

Clark will have a bodysuit of her own, though, as costume designer Desmond Evan Smith is working on a skin-suit that would give her the appearance of being nude on stage. “Yes, I’m putting aside postmodern choreography for this round,” Clark added, an edict which extends to her music videos. She and Perron discussed a video for which she wants Carrie Brownstein to write the dialogue. Brownstein also wrote the script for what St. Vincent referred to as an interview kit, a pre-recorded series of answers to avoid the “festering self-loathing” that comes from answering the same questions from journalists over and over.

You can read the entire in depth interview, which includes St. Vincent discussing directing The Picture of Dorian Gray (“The likelihood of making this film is, like, two percent”) and quotes from Stevens, Brownstein, Byrne, and others, at The New Yorker. St. Vincent will head out on her Fear the Future tour this fall, and you can find those dates here.