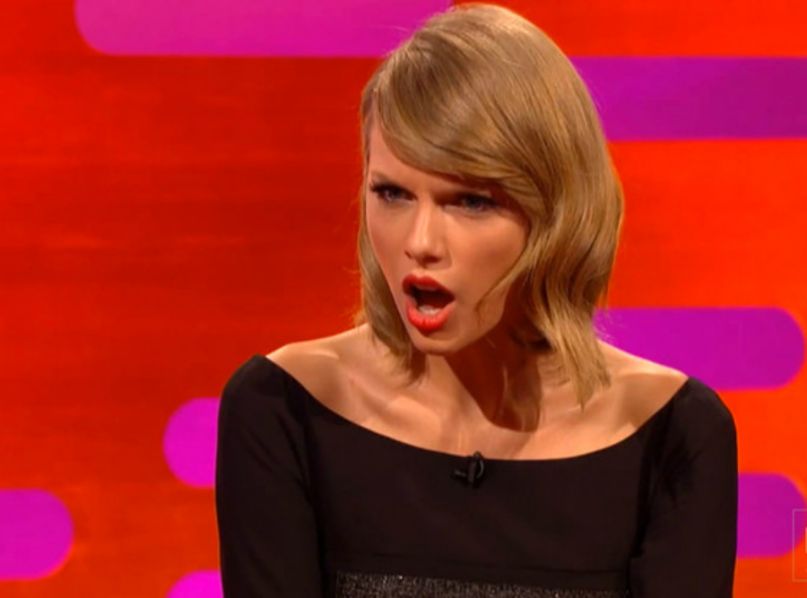 Taylor Swift dropped “Look What You Made Me Do” on Thursday night, and the internet responded by briefly taking a break from arguing about Donald Trump to argue about the pop star. Is the whole record about Kanye or just a few painfully obvious lyrics in the lead single? Is a Father John Misty diss track next? Is Swifty entering a Hot Topic goth stage? That album cover: y tho? And so on. However, seemingly lost in all of this was the announcement that Swift and monopolistic ticketing behemoth Ticketmaster were partnering on something called “Taylor Swift Tix powered by Ticketmaster Verified Fan,” a service that claims to help get tickets in the hands of fans instead of bots or scalpers—if fans are willing to help promote Swift and purchase things from her.

Ticketmaster recently launched its Verified Fan program—which uses an algorithm to collect user data that determines if you’re a scalper, bot or a fan—for events like Bruce Springsteen’s upcoming Broadway run, Ed Sheeran’s world tour and much sought after Hamilton tickets, and did so to positive reviews. The details of Swift’s deal are a bit more nefarious, however. Fans are invited to ensure a place in the virtual ticketing line in the city of their choice in a “really fun way”: pre-ordering her album, buying other Swift merch and/or spreading The Gospel of Swifty online. From the ticketing site: “Watch the latest music video, purchase the album (for the greatest boost), post photos and engage on social media. Check the Taylor Swift Tix portal for the newest boosts and activities you can do everyday.”

(Read: Look What We Made Taylor Swift Do)

After fans pre-order the CD (from big box retailers like Target or from Swift’s store only—no indie record store support here), they’re informed that if they’d like a guarantee they’ll receive Reputation it on the day it’s released they’ll have to fork over an extra $48.03 to ensure timely shipping, which brings the cost of one CD purchase to $63.03. It bears repeating: $63.03. For a single CD. This nonsensical move seems aimed to appease UPS, one of Swift’s many corporate partners for Reputation and the tour supporting it. Impoverished fans aren’t left out of the “fun” however, as they can watch the video for “Look What You Made Me Do” for a lower “boost” to their place in line.

“Your boosts are automatically applied for up to five views, per day. Watch every day and receive your boosts,” the site not-so-subtly advises. Fans can also flood their social media with posts about Tay Tay and her new record for further lower level boosts. This allows Swift and Ticketmaster to say fans don’t have to buy anything to join in on the “fun”—but it will admittedly increase your chances at tickets if you do. Clearly, this system benefits the pop star’s wealthiest fans. It’s all spelled out in this cute animated video that seems directly targeted at the young girls who make up much of Swift’s fanbase:

So basically, give Swift a lot of extra money or join her publicity team to ensure you have not a ticket—but simply a place in line for the opportunity to purchase a ticket. Whatever path the singer’s ticket-seeking acolytes are able to take, Swift benefits from a system clearly designed to squeeze every last dollar from her obsessive fanbase in a total perversion of what the Verified program is supposedly all about: the fans. What Swift and Ticketmaster have essentially done is alleviate the stress and anxiety of dealing with scalpers… by making Swift herself one. What else do you call someone who charges you more than the listed price for a ticket to a concert? Not only that, Swift is charging extra to ensure a place in line for tickets—not the tickets themselves.

Something that’s especially troubling in all of this is the fact that you can purchase Swift’s new album up to 13 times to receive further boosts to your spot in line. There is even a “progress bar” showing how your purchases are advancing your place in the virtual line. The mere suggestion that fans could (and should) purchase an album more than once is egregiously immoral and seems to be clearly directed at the younger, more illogical, more obsessed factions of her fanbase who will do anything to appease their hero—who in turn will apparently do anything to appease her corporate partners. That Swift and Ticketmaster are masquerading this unscrupulous, ultra-capitalist campaign as a highly moral attempt to help fans and squeeze out scaplers is a further insult, and one the singer—whose squeaky clean image becomes further exposed as a facade with each passing day—should be ashamed of herself for being involved in.