Wet Hot American Summer: Ten Years Later Worth the Wait, Even If McKinley Has Something at 11 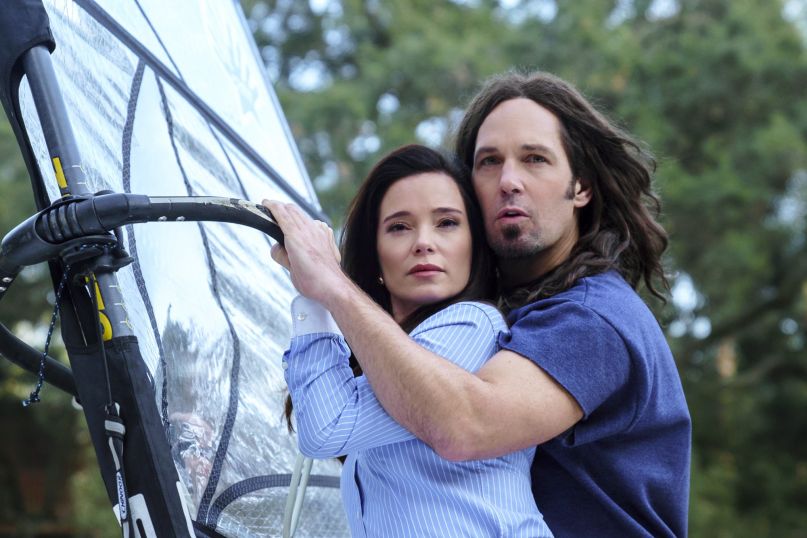 This review originally ran in July. We’re reposting it ahead of the August 4th premiere.

“Camp Firewood is a way of life,” says Abby Bernstein (Marisa Ryan) halfway through Netflix’s Wet Hot American Summer: 10 Years Later. No kidding! Sometime within the last 16 years, David Wain and Michael Showalter’s 2001 cult classic comedy became a rite of passage for Generation X-ers and millennials alike. It was the cool comedy to pull out in college and if you knew someone who owned it (or loved it), well, it was like finding your kindred spirit. More importantly, though, it was also the epoch of Wain and Showalter’s manic brand of meta humor, the likes of which has since influenced countless Hollywood comedies in its wake, thanks to the ensuing success of its stars and masterminds. It was a hell of a ride, too: What began with MTV’s The State trickled into those delirious Stella Shorts and brilliantly culminated at a summer camp in Upstate New York.

One of the reasons why the film has endured for so long is because it’s such an enjoyable escape. When Wain and Showalter set out to parody films like Meatballs and Indian Summer, they were smart to model their film off more timeless fare like Dazed and Confused and Nashville, as the magic of those classics certainly rubbed off. Granted, there’s always going to be something magical about anything involving young love at summer camp, but there’s an imaginative dose of nostalgia to Wet Hot American Summer that’s worth revisiting again and again. Reason being, anything can happen at Camp Firewood! It’s a place where a talking can of vegetables can solve your problems, those quirky D&D kids can save the day, and everyone — both counselors and campers alike — can boo a lame Broadway ditty from Godspell.

There’s also a palpable innocence to the cast. Look at those youngsters: Elizabeth Banks, Paul Rudd, Bradley Cooper, Amy Poehler, Ken Marino, Joe Lo Truglio, and the list goes on and on. Most were at the start of their careers, and there’s this aching naïveté to each one of their performances. From the minute they wake up in their bunks to the moment they leave camp, you can tell neither one of them has a single clue if this crazy comedy is actually going to work out, but they give it their all regardless. Knowing that is partly why 10 Years Later hits much harder than 2015’s First Day of Camp. Because whereas the prequel series found the stars playing younger versions of themselves at an even older age, this sequel series finds them essentially playing the same age they were when they first arrived on set way, way back in the early aughts. Yes, they’re playing fictional characters and not themselves, but it’s only natural that they might have leaned on past experiences from that particular time in their lives.

It’s a very strange situation that likely carries a modicum of emotional baggage for everyone, but it’s also a hilarious platform for writers like Wain and Showalter, who have made a career for themselves out of being entirely self-aware and self-referential. And seeing how they both found their footing together in the early ’90s, they too have a spiritual connection to the source material that’s a little different than the preceding entries. So, it’s not very surprising to see that they approach the era much differently than they did for the ’80s. Rather than looking back with rose-tinted lenses — or any kind of sentimentalism, for that matter — they gleefully poke fun at a number of subcultures and trends with subtle mortification, whether it’s soft-spoken singer-songwriters at coffee houses, passing references to Yahoo Serious, insufferable Sundance indies, or once-prominent cultural hangouts like B. Dalton. Oh god, they must mention B. Dalton at least three or four times by the end of this series.

As we catch up with our former Camp Firewood counselors, you can almost hear Wain and Showalter howling from the writers’ room: Victor Pulak (Marino) remains the juvenile virgin, even though he works as a shirtless bartender in a swanky New York bar a la Tom Cruise’s Cocktail, but he’s still the man, according to his trusty co-worker Neil (Lo Truglio). Cooper (Showalter) is trying to write a “once in a generation memoir that really captures the cultural zeitgeist of the early ’90s” only he doesn’t have an ending since it’s 1991. Meanwhile, his former heartbreaker Katie (Marguerite Moreau) has turned her fashionable sensibilities into a lucrative, high-profile gig at a fashion marketing firm.

Elsewhere, Susie (Poehler) works with New Line executives, attends Counting Crows shows at the Viper Room (where the deadly aftershows involve Eric Stoltz and some jaeger bombs), and dates a hot star named Garth MacArthur (Jai Courtney), who’s been gaining buzz at Telluride for his role in Espresso Compresso. Speaking of which, J.J. (Zak Orth) has become a ’90s indie film cliche himself, toiling away at Kim’s Underground, where he champions The Replacements, refuses to rent out When Harry Met Sally, and pines over his hilariously retconned Firewood fling, Claire (Sarah Burns), who’s “hanging out” with her longtime boyfriend (and womanizer), Mark (Mark Feuerstein).

That’s not all. Gary (A.D. Miles) has taken the talents he learned from Gene Jenkinson (Christopher Meloni) and is now head chef of the trendy, upscale Restaurant L’ECole. McKinley Dozen (Michael Ian Black) and Ben now have a baby together, only they’ve stumbled into a ridiculous parody of The Hand That Rocks the Cradle. Lindsay (Banks) is still climbing up the ranks as a journalist at Channel 5, where her boss (Paul Scheer) looks like the spitting image of Kato Kaelin. Victor’s flame, Abby Bernstein (Ryan), writes some “hot stuff” in a sex and intimacy column for The Downtown Press. Beth (Janeane Garofalo) never left Camp Firewood, and the same could be said for Andy Fleckner (Paul Rudd), who has the toughest existential crisis out of everyone.

Several other familiar faces return — including everyone’s favorite Jewish couple, Yaron (Wain) and Donna (Lake Bell), whose arc provides what may be the funniest scene Wain and Showalter have ever written — and they join several new campers and counselors who all earn laughs. High among those ranks is Skyler Gisondo as Jeremy “Deegs” Deegenstein, the bratty, foul-mouthed King of Camp who gives Andy a run for whatever change he has swishing around in his pockets. He nails all the beats of Wain and Showalter’s comedy literally right off the bat, as his introduction on the camp’s baseball diamond is a pleasant reminder why we love irreverent comedy. John Early also shines as the camp’s snotty new stage manager, Bill Logan, who calls Susie a “cautionary tale” and warns that “it is not [her] theater, that day has passed.” It’s a great rivalry.

Then again, most of the stories at Camp Firewood are great. That’s never been the problem. Instead, the issue is that, similar to First Day of Camp, Wain and Showalter feel the need to leave the campgrounds and venture off into extraneous plot lines that wind up testing the limits of the story’s irreverence. Despite being the weakest part of the prequel series, Showalter returns once again as President Ronald Reagan, only this time he’s joined by his successor, President George H.W. Bush, who’s portrayed to admittedly hilarious effect by Ian Black. To their credit, the Bush and Reagan rivalry is a mild upgrade from the prior Reagan subplot, but it doesn’t take long for the whole thing to start resembling the final act of an average South Park episode. It’s just never as compelling as anything else that’s happening at Camp Firewood, even with Chris Pine involved.

Now, some fans might argue these outlandish narratives are no different than the inclusion of SkyLab in the original film, but that’s not exactly true. Sure, it’s a ludicrous idea that a bunch of fringe kids and an assistant college professor are going to stop a falling satellite with some polyhedral dice and a jerry-rigged machine covered in donuts. But, never once do Wain and Showalter cut to NASA or some secret government lab. Instead, it’s all self-contained to the camp, where the only heroes are ostensibly a bunch of kids who love Mork and Mindy, The Cure, and astrological science. In other words, the irreverence is not only earned, but made better by being in a more natural setting. The same goes for Mitch: We didn’t need an origin story for why he turned into a can; it was always funnier accepting the idea that it was just a random talking can.

So, yes, 10 Years Later is about as disjointed as First Day of Camp, but it’s well worth it. There are so many jokes wired into these eight episodes that it often feels like watching six different Zucker brothers’ movies at once. As storytellers, Wain and Showalter relish breaking every rule in the book, and the feeling’s quite contagious. In fact, one of the best recurring gags is how the two of them retcon the past and have the characters shout out random camp calls (“Walla walla hey/ walla walla who”) or discuss old traditions (Spirit of Camp Firewood), all of which were never mentioned in either the film or the series. Even better, musician Craig Wedren gets in on the fun again, offering up a litany of ’90s-inspired tunes that take a piss out of the decade. Listen closely and you’ll hear tongue-in-cheek re-workings of past FM hits like the Chili Peppers’ “Give It Away”, Spin Doctors’ “Two Princes”, and Bell Biv DeVoe’s “That Girl Is Poison”.

There is an ending to the series, and fans may be divided. It’s a good one, though, and feels in line with the enduring spirit of the franchise. Ha, that’s a funny word for this, huh? Franchise. Who in their right mind would have ever thought Wet Hot American Summer would be a franchise? Not David Wain. Not Michael Showalter. Nobody. Perhaps that’s the greatest joke to come out of all of this, the fact that we’re now sitting here with one feature-length film and 16 episodes on one of the biggest streaming networks in the world. It’s outstanding. It’s ludicrous even. But it’s a reassuring victory to both those who were involved and those who supported the film over the years. Hmm. You might say that each and every one of us is like Professor Henry Newman and his oddball fringe kids, celebrating an unlikely success as the rest of the world moves on unnoticed. When would we say that, you ask? Anytime … dinner … literally anytime.