Never has the pilgrim and pop star sounded more in harmony 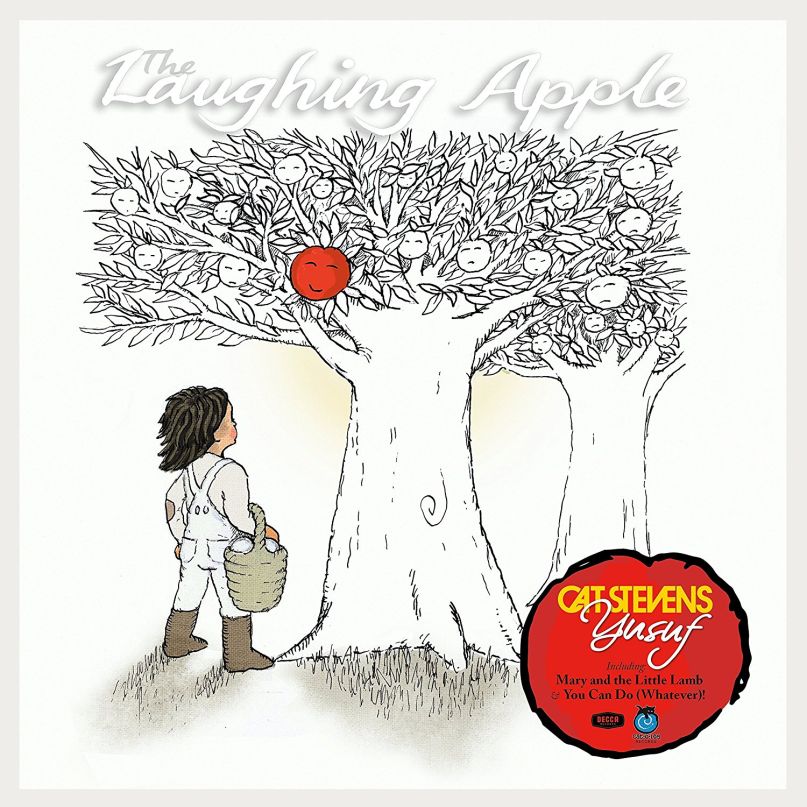 The forward slash in Yusuf / Cat Stevens’ billing says quite a lot about the folksinger’s return to conventional Western recording and performing over the past decade. With each album, Yusuf seemed to have one paw scratching about the musical alleyways of ‘70s icon Cat Stevens while the other foot stood bare at the foot of a prayer mat, drawing inspiration from a different type of spiritual well. An Other Cup (2006), Roadsinger (2009), and Tell ‘Em I’m Gone (2014) often found him reaching back to repurpose old works, composing new songs about life’s curious journey, and even employing Islamic theology in his songwriting – occasionally, the artist on either side of the slash appearing to be the odd man out. Now, with The Laughing Apple, that paw stretches even further back into the pre-Tillerman days, and yet never has the pilgrim and pop star sounded more in harmony.

From the album artwork to the songs themselves, critics and listeners will no doubt agree that no other record since Yusuf’s return has felt so much like a classic Cat Stevens album. There are plenty of logistical reasons for that. Tea for the Tillerman producer Paul Samwell-Smith returned to helm the sessions, longtime collaborator Alun Davies appears with his signature acoustic guitar work, and Yusuf, as was the case with many of his iconic ’70s records, created the youthful artwork, including a storybook-style illustration for each song. It’s also worth noting that the majority of these songs either appeared on records or in demo form even before Yusuf had shed his pop singer persona of Cat Stevens for the ebullient, bearded folksinging Cat who would capture the world’s imagination a few years later. Alongside a handful of new songs, these early and inchoate compositions have been reworked and completed, but their origins alone do not yet account for Yusuf once again tapping into his most successful sound.

“As you grow older, the sweetness of youth, as Wordsworth expressed in his poem ‘Splendour in the Grass’, gets stronger,” Yusuf has explained. “Looking back and emotionally drawing on the themes of childhood possibilities and disappointments is what exemplifies this album, for me.” That perspective makes a lot of sense in this instance. The unique power of Yusuf’s music has always been his ability to package life’s troubles in songs simple enough to be listened to and appreciated by children. What young person can’t contentedly sing along to “The Wind”, “Moonshadow”, or even “Father and Son”, despite these songs placing their protagonists at some of life’s most critical crossroads?

On The Laughing Apple, we actually see the genesis of one song come from a nursury rhyme. “Mary and the Little Lamb” starts with the familiar lyrics of its childish counterpart but expands to be a song about patience, faith, and love in the face of disappointment, loneliness, and a world that sternly shakes its head at those who follow their own path. Similarly, the album’s title track, reworked from its 1967 version, tells the tale of a plucky unplucked apple, different from the rest of the bushel, even in the face of picking season and the impending autumn; only now, Yusuf possesses the patience and storytelling voice he lacked as a young pop singer to stir the listener with this orchard original. The redone lullaby “I’m So Sleepy” now features a gentleness and hushed delivery that could actually coax someone to dreamland, again the result of a more mature songwriter all these years later.

Not all of these songs have such naive origins, of course. The reworked opener, “Blackness of the Night”, which has found its way into setlists in recent years, chronicles the lonely wanderings of several adrift in the world, Yusuf again adding newfound weight through both restraint in his arrangement and a voice heavy with worry. “Just like the wind/ My heart’s rushing fast,” he sings on “See What Love Did to Me”, an original that finds the 69-year-old dipping into the same stream of jubilation “Can’t Keep It In” did 45 years ago. The brief “Mighty Peace”, with acoustic hints of “The Wind”, again finds Yusuf turning his mind’s eye back to childhood “with nothing more to do than to watch the sun make light and watch the moon take over.” It’s not a nostalgic wish on his part, though; it’s a deeper understanding of the peace to be found in the simple activities of childhood — so many of which we give up without being asked to when we become adults.

“I’ve got no time for silly chitter-chatter,” Yusuf sings in the updated “Grandsons”. It’s a sentiment that hearkens back to the the very core of Cat Stevens’ music: time is short, and there’s still so much left to find out. Perhaps that’s why a simple strum, plain words, and enthusiasm are his most trusted tools as a songwriter. They let him relate his journey without ever delaying it for more than a couple minutes and a melody. The Laughing Apple isn’t a diluted version of the music Yusuf has been releasing over the past decade; embedded in its pop craftsmanship are new songwriting challenges, Eastern sounds, and scriptural themes that don’t mask themselves. It’s just the version that allows him to be as bold as that smiling, little apple found in the title track. And the cat doesn’t fall far from the apple.

Essential Tracks: “Blackness of the Night”, “See What Love Did to Me”, and “Mary and the Little Lamb”