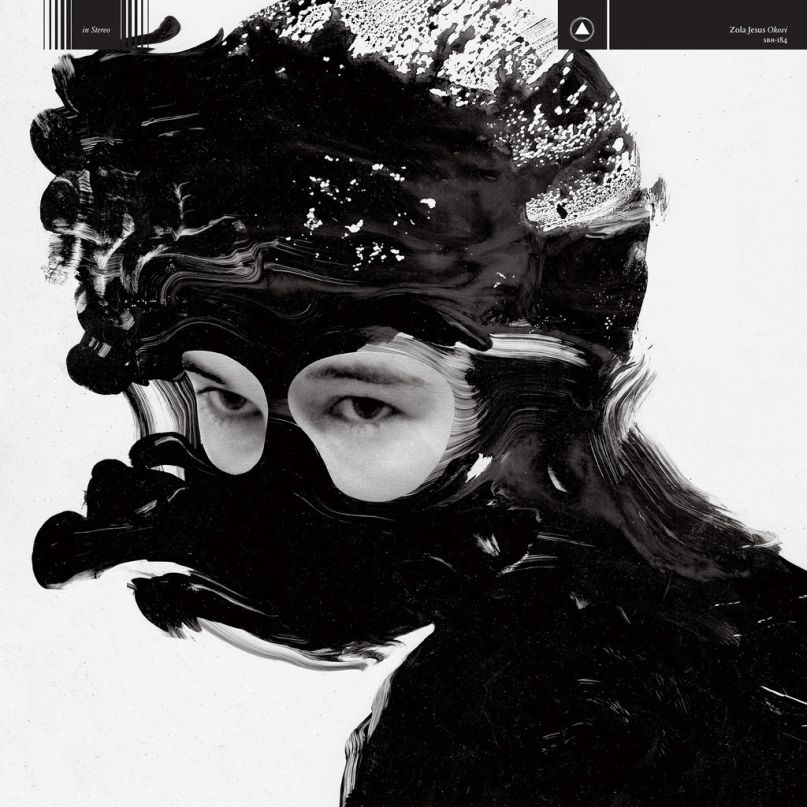 Find someone who skates through life with no issues, and chances are the person you’re talking to doesn’t live on Earth. For some, the way to move onwards is by experiencing as much as possible with your head tilted towards the sunlight. For others, simply getting through another day is a feat. When Nika Roza Danilova found herself submerged beneath new layers of depression and darkness, the musician behind Zola Jesus decided to modify her outlook — and while a perspective change can’t fix everything, it was the start of something larger. On Okovi, Danilova’s sixth album as Zola Jesus, she found that in order to fight off her own demons, she had to aid others in their own battle as well. A close friend attempted suicide. Another was diagnosed with cancer. Instead of questioning death in response to both events, like looking at what death means or what the afterlife entails, she examines how we, as individuals, are bound to unique burdens and spend years trying to move with them tied to our ankles. Okovi, which itself is a Slavic word for shackles, is an album of intricate reflections, moody instrumentals, and the beginning of inner peace. Over a decade into her career, Danilova finally finds a way to holster her music as Zola Jesus to find herself in a struggle to simply live.

The first step to breaking down her depression was removing herself from a negative physical space. Danilova ditched Seattle and moved back to her rural, isolated hometown in Wisconsin to build a house in its woods, an imperative decision to improve her own mental health and well-being. It was there that she completed the second step: writing the crux of Okovi and, along with it, the self-reflective steps of confronting shackles and the various movements that can help unlock them. Naturally, Okovi submerges itself in a spacious type of darkness. The music mirrors her questions, channeling the eerie production of artists like Portishead, Imogen Heap, and Grouper. But while the hushed reverb of “Doma” or anthemic, slow-burning groove of “Soak” touch upon those sounds, Danilova isn’t trying to sound like those artists. The opera-trained singer creates her own path, synthesizing her past work with noise, electronica, classical music, and more into a hybrid that’s entirely her own. On “Veka”, she deepens her sound with tubular gong-like sounds, giving the illusion of a bell being hit gently, while background vocal wails and reversed spoken words sound like delusional pleas that snaked out of an insane asylum. Elsewhere, she gives way to other musicians, bringing in friends to turn her ruminations on “Ash to Bone” and “Witness” into effecting, minimalist classic works with cello, violins, and double bass. The most hard-hitting sound of Zola Jesus’ evolution on Okovi is the blown-out electronic production of “Exhumed”. A menacing breakdown scatters its emotions with thundering drum percussion and terse strings. The instrumentals nod to ‘90s goth rock — which could come across like the melodramatic lurches of Evanescence — but sound full and dramatic, veering towards the jagged coolness of Björk’s Vulnicura instead.

Despite the sprawling instrumentation and swirling darkness present throughout, Okovi sees Danilova take full control of her sound. Her struggles with depression position her as a friend looking to help, turning her negative moments into a helping hand, urging others to crawl out of their holes as she did. In a world that provides ample reasons-as-weapons to damage oneself, she wrote “Siphon” for those nearing the end of their ropes in hopes of giving them a hand to reach safety. Like a goth version of HAIM, the song follows drum machine slaps and glistening synth until the vocals vanish, leaving a whirring, unsettling electronic fuzz that reminds you that this dream-like cloud came and vanished amidst a record of dark noise electronica. Elsewhere, her vocal delivery pushes into another side of her personality that hasn’t been shown before. Near the end of “Soak”, Danilova snaps, and her pitch-perfect notes give way to a free-form howl that sounds liberating at minimum. Finding yourself isn’t about getting to a point of happiness, nor is it about discovering what you like. It’s about finding out how to balance everything, how to accept who you are, and how to move forward in a way that engages with the world by absorbing both the good and the bad. The vocal dexterity and lyrical aid on Okovi positions Zola Jesus as a must-listen for anyone struggling to figure out how to tread life’s waters.

Happiness isn’t an eternal state. It’s not even something that can be achieved in full. It’s a process, and on Okovi, Danilova not only comes to terms with that, but she offers her own slices of joy. “Wiseblood” stirs through calming tones as she questions why we are undergoing tough situations that seemingly fail to benefit us, as if coming to terms with that being a staple of life. Then there’s “Remains”, an unexpected contender for the goth dance anthem of the year. While she’s busy questioning the positive outcome of struggles (“Do ruins give power/ Or do they give proof/ That something meant more/ Than what we lived through?”), a major-chord piano part repeats itself beneath relentless electronic drumming. It’s a catharsis in the making for listeners to sweat their worries out to on the dance floor. By nature of confronting so much gloom Okovi can weigh heavily on listeners, but the brighter numbers mixed in make it easier to soak up. The same could be said of life at large.

Perhaps that is to be expected when the album’s artwork — a thick, black sludge coats Danilova’s head, her eyes gazing out at the viewer — presents Zola Jesus as an artist who’s found her calm amidst a world of undecipherable iniquity.  Okovi isn’t the album where Danilova finds happiness, but it is the album where she learns to make peace with life as a double-edged sword. It’s why she bookends Okovi with the purification of returning home in “Doma” and the gorgeous, cinematic, orchestral strings of “Half Life”. The latter is a word-less reflection where she uses her voice and newfound understanding to accept life as is, summing up all that came before it. Sometimes in order to carry on through life, you need to accept that everyone needs help eventually. Thankfully, she did. Zola Jesus reaches a profoundly synthesized musical point and lyrical arch on Okovi that leaves you breathless come the end. Once there, she extends a hand, urging you to carry on through life to see what else it can offer because she’s curious to see, too.