From Charly Bliss to Lizzo to Smino, it was a hot weekend in Kalamazoo, Michigan

by Frances Welch and Kevin McMahon 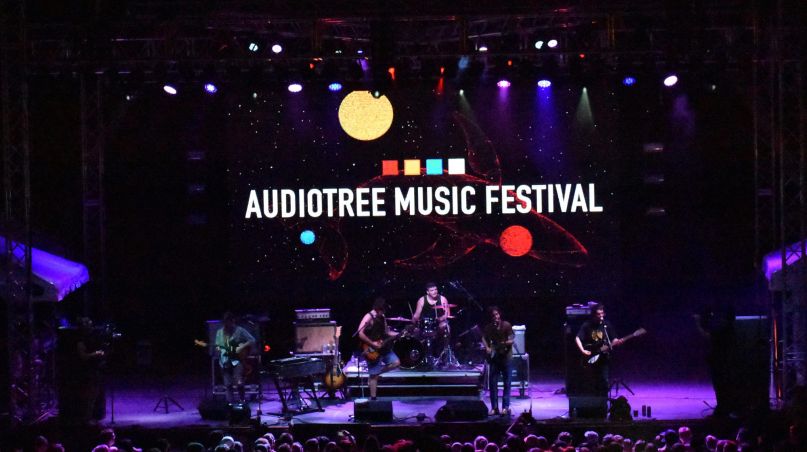 Festival culture has transformed into a mass production that covers acres of space, features jam-packed lineups, and offers ticket prices that require some major pre-budgeting. It’s moreover a summer lifestyle that now caters to a specific pecking order of ticket status that has made festivalgoers more focused on the color of their wristband than the original reason they bought the tickets in the first place. But for Audiotree Music Festival, none of that was relevant, because it was never trying to be something that it’s not.

This year was the festival’s first time around as a two-day event, and everything ran quite smoothly, which wasn’t entirely surprising given its small size. As such, the curated perks remained rather modest; in other words, there weren’t any massage tables or an abundance of vendors or pressure to make it a fashion show from fans or artists alike. It’s simply nestled in downtown Kalamazoo, Michigan, taking over a small, landscaped park, housing no more than 1,000 fans, one stage, and a solid lineup that truly makes it just about the music.

Because of its single stage, the only competition came from the unseasonably hot 90-degree weather, which allowed everyone to fully absorb the festival’s diverse selection of artists. As expected, the crowd was mainly younger individuals, which made sense considering that the lineup comprised of mostly younger bands — no reunion shows in this park. On Friday, Noname, Lizzo, and SuperduperKyle catered to a slightly more hip-hop realm, while Saturday embraced the alternative rock of Twin Peaks and King Gizzard & The Lizard Wizard.

What’s exciting is that Audiotree Music Festival is still very young with its head in the right place. There were no distractions of extracurricular activities or half a mile of food and craft vendors, just music, and that’s okay because sometimes that’s all it needs to be about.

As rock music has changed, so too have its champions. Pinegrove are unlikely heroes in the indie world, but in a short time, their music has come to occupy a special place in the hearts of their fans. Simply put, it’s the space reserved for meaning. Pinegrove is a band that says what they mean, in a way that shows they mean it — both live and on record. From the first note of set opener “Aphasia” to the last note of closer “New Friends”, Evan Stephens Hall and co. did not hint that anything less was possible. Hall even squinted from behind his sunglasses and felt the need to apologize for his eyewear, saying, “[I wish it wasn’t so bright] because eyes are the best way to tell someone you mean it.” –Kevin McMahon

Despite the afternoon’s peak heat, somewhere in the realm of the mid-’90s, Orlando-based SALES played a fantastic set and didn’t appear to mind the unseasonably hot September day. Duo Lauren Morgan and Jordan Shih, with newly added touring drummer Malcolm Martin, performed their newest single, “Talk a Lot”, and tracks off of their first self-entitled record for a small but growing crowd. Their humbling stage presence doesn’t require much from their audience except a respectful ear, making you want to get to know them as people and figure out where this sweet, calming sound came from. “It’s already hot in here but we’re going to heat things up with this make-up break-up song,” said Morgan, before closing out their set with “Getting It On”, dedicating the performance to the Internet and their fans. –Frances Welch

It’s hard not to sound like a complete starstruck super fan after watching Noname, who put on an incredible afternoon-closing performance on Friday. The audience was admittedly small for the Chicago rapper, who gracefully wore a sweater in 90 degree weather, but they proved how quality trumps quantity for an intimate and energetic performance that was reverent of her nearby hometown. In respectful Chitown fashion, Noname offered her own spin on her feature for Saba’s “Church/Liquor Store” and revisited Kanye West’s “Heard ‘Em Say”, chiming in with: “He’s problematic but he’s a star.” Before closing out her set with “Yesterday”, she said, “Listen to these dramatic ass strings and think about a moment in your life that meant a lot to you… nah I’m just joking,” but I did, and it was in that moment that Noname graced myself and the rest of the audience with what pure raw talent looks and sounds like. –Frances Welch
_________________________________________________________

I’ve never seen Beyoncé live, but I imagine it would feel a little bit like a Lizzo performance. If there’s one thing she wants from her audience, whether they’re male or female, is for them to walk away and feel empowered, and I’m still radiating from the confidence boost I gained late Friday night.

To rally up her slower ballad “My Skin”, she told the audience, “I’m here to activate you, and music seems to be the only place where good things are happening.” She continued with a powerful speech of recognizing the natural disasters and injustices that have been happening all over the world. “I’m not trying to make my music political, but it needs to be said.”

If you’re at all familiar with Chicago rockers Twin Peaks, then you’ll know these guys like to have a good time and make sure the audience comes along with them. Their music continues to improve when it was already good in the first place, but their performance gives what headphones can’t: a rowdy, sweaty good time. I wouldn’t be the first one to say their stage presence makes waves of rambunctiousness with a hint of being goofballs. But regardless of the adjectives, these guys are the perfect combination of mature musicians who don’t take themselves too seriously; no, they’re there to have a good time and play some good music. After all, isn’t that what rock n’ roll’s about anyways? –Frances Welch

Canadian quartet BadBadNotGood knows how to carry a vibe. In a world of smart phones and ever shrinking attention spans, this is no small feat for an instrumental group. From the jump, BBNG have pierced the veil of outdated connotations as to what does and does not constitute jazz, and their ability to improvise commands respect from both old heads and new. Evidence is plentiful, but Saturday at Audiotree Music Festival their blistering pace during a rendition of “Triangle” certainly served as case in point. While drummer Alexander Sowinski was the only non-barefooted member on stage, it was clear he was equally relaxed. As Emcee, Sowinski’s soothing-yet-energetic tone effortlessly stitched a deft performance that sampled evenly from BBNG’s 4 studio albums. As Kalamazoo’s fever broke and the sun tucked itself behind the surrounding buildings, BBNG left the crowd refreshed and the musician’s within it feeling like they needed to go home and practice. –Kevin McMahon

Closing out the festival was King Gizzard and the Lizard Wizard, who dedicated their set to the late Charles Bradley. If a recorded track didn’t already make you stop and think twice about the Australian psych rockers, their live show will, as it’s an absolutely mental psychedelic space odyssey. There is nothing quite like the septet, and part of their uniqueness comes from their setup of two drummers, two bassists, and Stu Mackenzie flute moments. At first glance, their performance is absolute mayhem, but look a little closer and you’ll discover the most genius, orchestrated chaos.

For the majority of the set, the two drummers are playing the exact same beat in the same exact time, showcasing the discipline and precision that these guys have put into their work. Their music is brain jostling and their shows are a mosher’s dream, but what really sets them above the rest is the insane amount of musical talent that each one of them have, all intertwined in exchanged eye contact in knowing what comes next. There are time signatures flying all over the place and their tempos are physically exhausting, but they’re doing this all while putting on a fantastic performance, playing some of today’s most intricate and talented rock. –Frances Welch

Smino has the effortless swagger of your coolest friend’s coolest friend. Whether he’s handing out backwoods to the crowd like an adult candyman, or letting words drip off his tongue in a buttery St. Louis patois, everything looks easy. For the unacquainted, his early 2017 debut Blkswn is set to be one of the marquee hip-hop releases of 2017, its brand of bouncy modern soul providing the perfect bed for Smino’s dynamic vocals. It’s hard to overstate just how fitted his voice is to main collaborator Monte Booker’s productions, and Friday’s performance was no exception.

In an uncharacteristically hot late September set, Smi sauntered on to the stage delivering the title track to Blkswn. The performance was without his typical live band, but Smino had no problem occupying the extra space. While most are quick to characterize Smino as a rapper, seeing him live immediately shows that characterization to be narrow. Smino’s singing is every bit as on-point as his rapping, a skill that clearly separates him from his peers. The set had a brief technical hiccup, which Smino handled by striking a pose and speaking through a grin, “[while we wait], I’ma stand up here and y’all can take some pictures of me”. –Kevin McMahon