A big, dumb action movie that exploits real-life tragedies by reveling in its bloodlust 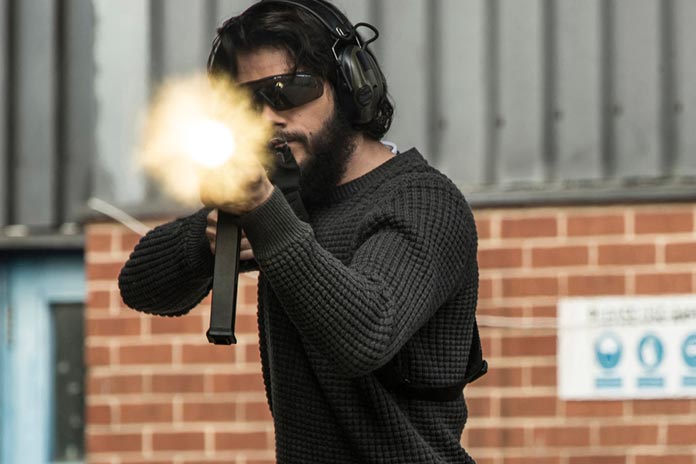 Let’s make one thing clear: American Assassin isn’t patriotic. This isn’t a movie that honors the sacrifices of soldiers in service of their country, nor does it do anything to posit America as a land worth fighting for. The America of this movie is ruthless and infallible, just like its hero: Mitch Rapp (Dylan O’Brien), a grim, smug superhero whose only flaw is that he’s right 99% of the time instead of 100%. Infallibility is a hard thing to root for; in lieu of flaws, hubris, and any sense of discernible growth, we’re left only with inevitability. American Assassin will satisfy those who want to see invulnerable American badasses gun down Middle Eastern terrorists. It’s like if True Lies weren’t a comedy.

American Assassin doesn’t achieve the astronomical body count of True Lies, but it revels in its bloodshed that much more. The film begins with Mitch on a crowded Mexican beach. He’s vacationing with his girlfriend. He proposes. She accepts. He gets them drinks, and that’s when a flotilla of terrorists arrive to gun down beachgoers by the handful. CGI blood stains the sand red as we watch body after shirtless body collapse in gory piles. By the end, Mitch is wounded and his girlfriend dead. Mitch preserves the face of her killer, who just so happens to be the leader of a terrorist cell. He vows revenge.

This is just one example of American Assassin’s unfortunate habit of conjuring real-life tragedies — in this case, the Bataclan massacre in Paris — and wedging them into a standard action template. There’s something deeply exploitative about indulging in the sight of bullets ripping CGI wounds in bare flesh in a film that aims to both evoke and address real terrorist attacks. In scene after scene, random people are caught in the crossfire of bullets, and while civilian death is obviously a consequence, these red shirts are treated like lambs bound for the slaughter. This sort of thing is expected in an action fantasy like Face/Off — the king of random crossfire deaths — but it resonates as tasteless and disrespectful in a film that’s drawing on true events.

American Assassin’s only effective twist — one that’s spoiled just by reading a plot synopsis — is that Mitch’s infiltration of a terrorist cell is thwarted by the U.S. government, which recruits him to serve as a covert assassin in their fight against terrorism. By virtue of MMA training and his own machinations, he’s apparently better at hunting down terrorists than the entirety of the CIA, but his thirst for revenge is simply too potent for him to be an effective hand. As such, CIA Deputy Director Irene Kennedy (Sanaa Lathan) sends him off to the woods to sharpen his skills with Cold War veteran Stan Hurley, who Michael Keaton plays with an iron-fisted glee. Soon, the pair are embroiled in a terrorist plot involving the Iranian government and a rogue American (Taylor Kitsch).

Mitch’s training under Stan results in the film’s best scenes, which feature staged scenarios in which an operative would have to address a threat within a crowded place, be it a town square or an IKEA. These are the only bits that feel fresh, as they represent a shift in how we address terrorism in an age where urban ground attacks are on the rise. But these moments suffer because Mitch has nothing to learn. He’s already perfect; he just needs to restrain his vengeance. And considering this need to overcome his anger is Mitch’s only emotional arc, it’s disappointing when this shift is signaled only in words, rather than actions.

It also doesn’t help that O’Brien’s Mitch only has two modes: cocky and angry. He moves like an action hero, but director Michael Cuesta undercuts every fight scene with an abundance of tight shots and quick cuts that only serve to disorient. That said, a climactic fight on a speeding boat thrills due to the constant interruptions caused by its relentless turbulence. Once American Assassin takes to the sea, it almost shakes the weight of the tragedies upon which it’s built. With nothing but a ticking nuke in play, everyone involve seems to finally embrace the film’s stupidity, with the action elevating to heights of fantasy on par with the cartoonish technology that Lathan’s Irene keeps huddling around.

Still, American Assassin never transcends the exploitation at its core. Beyond its clear bloodlust, the handling of its villains serves to simultaneously demonize an entire country and posit that there’s nothing worse than an American criticizing his country. That’s not patriotism, that’s fearmongering.