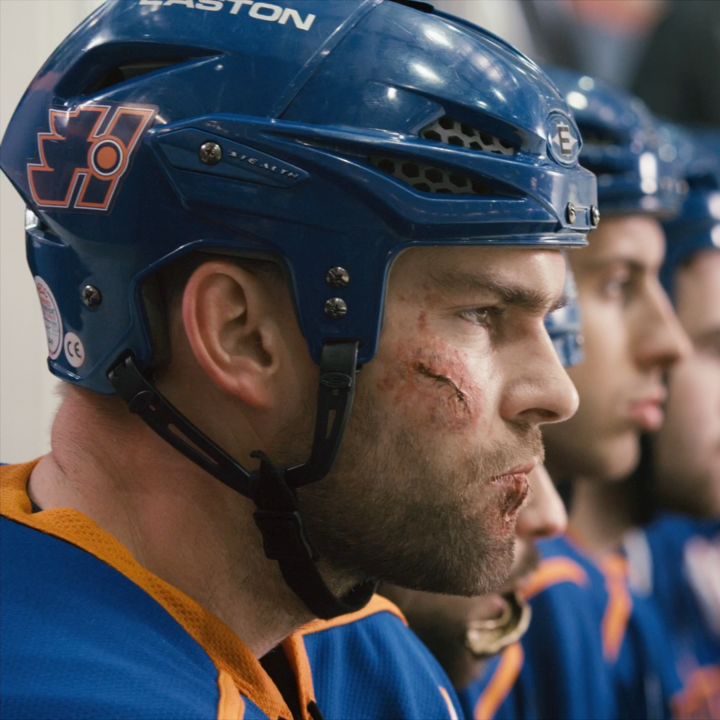 In 2011, Goon offered a surprising new entry into the canon of great sports movies, in part because it was so unlike the majority of its predecessors. This isn’t to say that there’s never been a sports film about the vulgarities of athletic men in locker rooms (see: Major League, Bull Durham, and so on), but Goon bucked so many of the common inspirational tropes in favor of something more candid. It was a sports movie about lower-level sports, centered around a man who knew how low the ceiling for his hockey-playing future truly was. But in that unassuming structure, it became the unexpectedly moving tale of a late bloomer who found purpose and friendship in sports, as so many have.

Goon: Last of the Enforcers often feels far more like a stock sports film than its predecessor, and that’s what ultimately turns it into a highly underwhelming follow-up. This time around, Doug Glatt (Seann William Scott) has far less to prove. The Halifax Highlanders made it to the playoffs, Doug proved to himself and his team that he has what it takes (even if he was mostly just there to bloodily end fights and stop attempted goals with his face), he and Eva (Allison Pill) lived happily ever after, and Doug finally found his place in the world. But now the hands of time are catching up, particularly given that Doug arrived late to the party in the first place. After a particularly grisly brawl with Anders Cain (Wyatt Russell), a brutish rival enforcer, Doug ends up with the sort of sports injury that might not just go away with some ice and rest. Combine that with the revelation of Eva’s pregnancy, and suddenly Doug has more to think about his life after hockey.

Doug tries his best to jump into a job in insurance sales with both feet, but can’t help but feel the itch of competition like so many other ex-athletes. And when Anders proves to be an inadequate replacement for Doug in both the morale and hockey-playing departments, despite the aggressive efforts of his father and Highlanders team owner Hyrum (Callum Keith Rennie), Doug starts to wonder if he has one more shot in him. (The team also has to contend with a series of new, chemistry-interrupting faces, in the vein of D2: The Mighty Ducks.) Through an illicit all-brawling hockey racket, through which he’s reunited with onetime rival Ross Rhea (Liev Schreiber), Doug begins a new journey down the path to glory, to a reunion with his team and a retirement he can be proud of this time around.

Co-writer Jay Baruchel takes over directorial duties this time around, and while he has a distinct eye for the cadence of hockey, he comes up short in managing the balance of bawdy comedy and genuine pathos that made the first film such a treat. Because so much of the film is built around Doug and Eva’s marital strife and Doug’s Ballers-esque contentions with his career ending against his own will, Last of the Enforcers too frequently goes down the tedious road of inspirational sports movie cliches. It goes so serious so often that the comedy actually starts to feel shoehorned into the proceedings, from a series of cutaways to the ESPN-style show SportsDesk (now featuring T.J. Miller waxing absurdist in front of a green screen), to the continued and largely repetitive running gags with Doug’s teammates.

Scott and Pill do affectionate work in catching up with their characters as they mutually struggle toward adulthood, and Scott in particular is still a goofy delight; his inability to correctly be led through a post-game interview makes for many of the film’s few genuine laughs. However, those are in far shorter supply this time around. Baruchel’s best friend Pat is even more of a raunchy appendage than he was in the first film, Schreiber retains little of his weary magnetism, Doug’s onetime rival Xavier LaFlamme (Marc-André Grondin) is mercifully sober but a fraction as funny as a result, and Russell is strangely muted in a role that questionably encourages him to play up his menace at the expense of his natural charisma. Scott’s clear affection for the character shines through often enough to keep the film watchable, but it’s disappointing to see Last of the Enforcers go to familiar places with such frequency.

The film never settles on any one stylistic motif, swinging from domestic melodrama to drunken hijinks to some shockingly unsettling violence by the scene. (Where the first film’s many brawls landed somewhere between comic and cathartic, Baruchel makes the inexplicable decision to over-emphasize the bone-crunching nastiness until they’re not even fun to watch by the halfway mark.) Last of the Enforcers is an affable enough hangout with some beloved characters, and it retains the outrageously Canadian spirit, but it’s the sort of sequel that feels wholly unnecessary even as it’s playing out. There’s beauty in the idea that a hockey team can become a family unto itself, and there are small moments in which Baruchel’s film finds its footing in that idea. But far more often, it simply feels like an assemblage of other, better sports movies, and a grave disservice to Doug Glatt as a singular, bloodied hero.