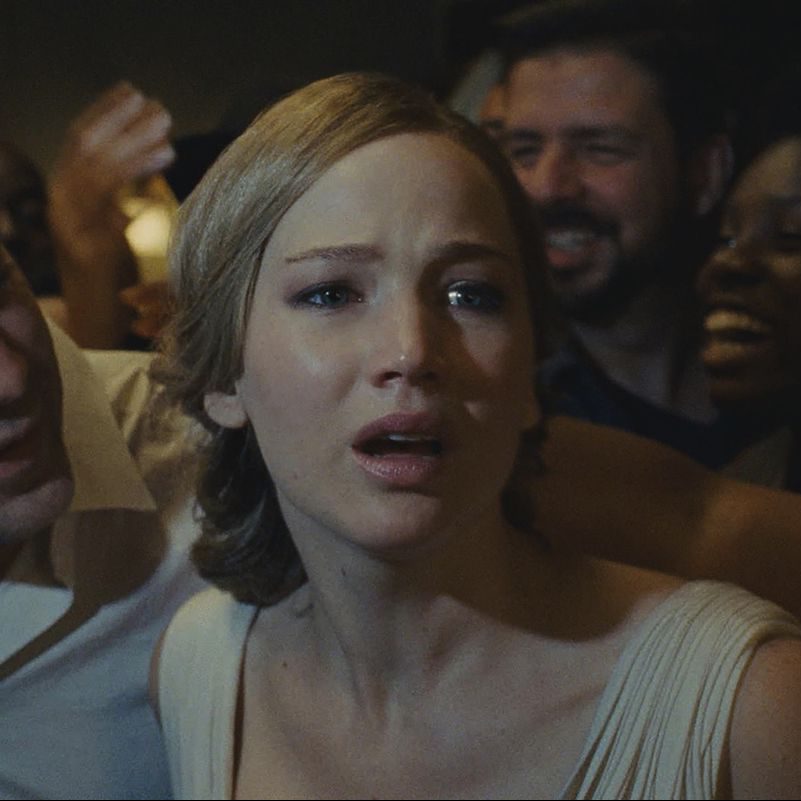 Mother! is not a film that allows for a great deal of middle ground in opinion or interpretation. But then, few would accuse Darren Aronofsky of being a filmmaker who allows for the same. With his latest feature, Aronofsky indulges some of his most abstract instincts in the service of an ever-shifting metaphor that will likely prove brilliant for some, and the height of pretense for others. The beauty of the film, however, is that neither interpretation is entirely wrongheaded. It’s a dizzying, sadistic feature, and may well be Aronofsky’s most biting work since Requiem for a Dream, but it’s also concerned with some deeply painful and humane material. Where that film aimed for repulsion of a literal bent, however, Mother! is far more concerned with horrors of the allegorical variety.

Oddly, and for as diametrically opposed as they are in style, the best basis for comparison against the director’s previous work may be The Wrestler. Mother! and its bizarre artistry will never be mistaken for that film’s naturalistic grit, to be sure, but both films’ protagonists struggle with what art has done to their lives. The curious shift, then, is how Jennifer Lawrence (known only as Mother) serves not as the artist in this instance, but as the nurturing muse of another’s art. She serves Him (Javier Bardem) in more than one way; in addition to renovating their gorgeous, gothic country home while her poet husband struggles with writer’s block, she performs every bit of emotional labor within the house. She suffers his temperamental mood swings and offers kindness in return, she politely demurs when her initiations of sex are bluntly declined, she tends to the home in her attempts to “make a paradise.”

All the while, she’s expected to suffer the artist’s whims, as it’s all ‘part of the process.’ But when a mysterious stranger (Ed Harris) appears at their door, apparently a great admirer of the poet’s earlier work, he’s invited to stay without Mother once being consulted. It’s simply expected that she’ll play along. Soon his wife (Michelle Pfeiffer) arrives, disrespecting both her and her home as she drinks to excess, criticizes Mother’s sexuality (or perceived lack thereof), and quickly begins to make herself at home in her own right. Soon other admirers and hangers-on follow, and the man’s health begins to pose a threat, and not even the mysterious vial of anti-anxiety medicine that Mother takes to stave off her severe fits of panic seem to help her deal with the fact that her paradise is slowly being stripped away from her.

And that’s just part of the story. Any keen eye will pick up, sooner rather than later, on the fact that Aronofsky’s film is operating on an entirely different level beyond the Polanski-esque surrealism of its storytelling. Its real muse, which is ironic on levels both explicit and paratextual, is Lawrence. Though not initially conceived as a vehicle for the actress, Mother! trades on both her star persona and her recent public tribulations in fascinating and often unsettling ways. As the idyllic home begins to overflow with unwanted presences both explained and eerily appearing, Mother struggles to continue maintaining her patience in the face of mounting disrespect, and sinister hints beyond that. Virtually no man enters the home without leering over her, in brief or at length, and the mess of His newfound social circle is hers to handle and hers alone. At least, until it begins to constrict around her, dragging her in against her will.

By the time Mother begins experiencing what may or may not be hallucinatory visions, of secret doors in the basement and brazen physical encounters behind closed doors, Mother! reveals itself as a psychological horror feature with some distinct thematic intentions. (This is especially true of its gloves-off third act, as bold a gambit as any filmmaker has attempted with major studio money in years.) Aronofsky conveys this through endless close-ups of Lawrence, following her around the home with such bracing intimacy that he manages to recast the story of the tolerant artist’s lover as a bleak thriller. From her vantage, Mother becomes a passive victim to the escalating hijacking of her own life, and eventually, her reality. The scratchy, lurid photography highlights this deterioration, as does a bloody, distinctly Cronenbergian slit in the floorboards of one room, but ultimately it’s Lawrence who’s tasked with carrying the weight of Aronofsky’s grander ambitions.

This ends up being thoroughly ironic given where Mother! eventually winds up, but Lawrence delivers one of her fullest performances to date in an exceedingly demanding role. She’s the emotional crux of the entire story and its only true tether to humanity, particularly as Aronofsky increasingly spirals into hellish surrealism, and it’s perfectly in keeping with the film’s harrowing notions of art and relationships and the sacrifices required to maintain both that Lawrence gives virtually everything a performer can give to the part. It’s a trembling, towering high-water mark for the actress; Aronofsky has long been gifted at maintaining an aura of total unease, and here it’s in Lawrence’s confusion and alarm and terror and constant raw emotion that he finds it.

To say too much more about Mother! is to interfere with its broader design. It’s a film custom-tailored to blindside, even if there’s certainly a debate to be had about the ultimate merits of such tactics as they’re applied here. Suffice it to say that Aronofsky winds up engaging with a greatest-hits of themes he’s explored elsewhere by the film’s end, from the selfishness of men to the religious fear of punishment to the physicality of sacrifice for one’s passions, whatever they might be. And as the film unravels, he and his game-for-anything lead explore one of the ultimate terrors of the human condition: the possibility that selflessness is an endlessly exploitable resource in its own right, and that decent people are often doomed to be mined for it by those who require it.

Mother! explores the nature of giving, as a concept, to its most disturbing imaginable ends. As such, it’s a film working in blunt-force metaphors, to such a point where its excesses become hilarious in ways both intended and indeliberate. It’s a fugue of horrors, and in its way, it’s one of the more potent commentaries on creation of recent vintage. Those excesses might verge on indulgence at points, but Mother! is the sort of provocation that folds even its own fleeting shortcomings into its self-reflexive commentary. It’s the sort of horror story that announces its lack of an end early and often, turning its inevitabilities into the kind of psychological trauma that lingers. This might be auteur cinema, but it’s also auteur cinema that exists to tear that idea to shreds and dissect its most fragile inner parts.