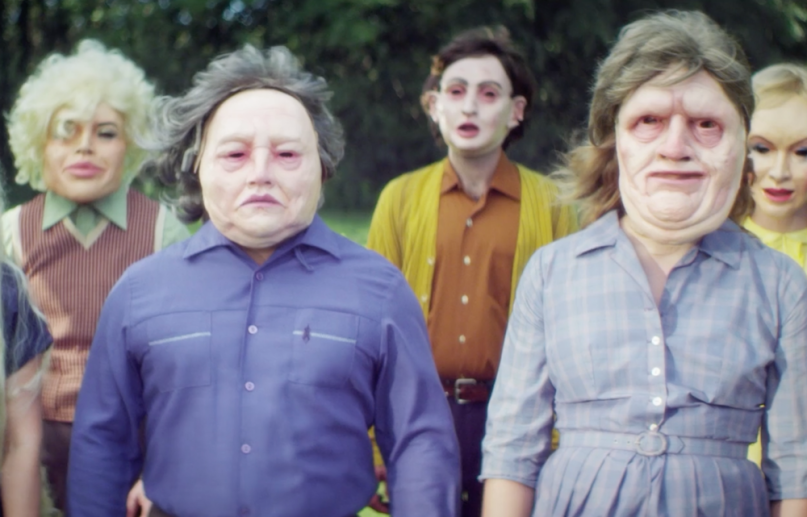 Grizzly Bear performed their latest single “Losing All Sense” on Monday’s edition of Jimmy Kimmel Live. Today, they’re back with a music video for the song, directed by Ssion’s Cody Critcheloe.

Starring actress Busy Philipps (Freaks and Geeks, Dawson’s Creek), the clip takes a page from the song’s name and plays out like a nonsensical dream or acid trip. What starts out as a fancy dinner date quickly devolves into a sequence involving a glowing lounge singer (complete with frontman Ed Droste as piano man), a community of masked creatures, an underwater battle, and a faux reality show. Yeah, you just need to see it to believe it.

In a statement to Dazed, Droste compared the visual to something out of David Lynch’s kooky imagination:

“There’s a lot of factors behind why singles get picked, and I’m not always the one who chooses it per se. I just go with the flow. But ‘Losing All Sense’ felt like an upbeat, fun thing to release. The video is even more of a dichotomy – it’s like David Lynch meets the The Real Housewives of Beverly Hills meets Heathers or something. It’s kind of campy and dark and surreal. I’m so excited for it to come out. It’s starring my friend Busy Philipps, another friend Freckle who’s an actress and a prominent genderfluid figure, and others. And it’s directed by a good old friend of ours, Cody Critcheloe from the band Ssion. He did an amazing job on a video for Robyn a year or so ago, and he’s an amazing musician, artist, and director. It’s a real trip. It’s a jaunty song with a surreal, campy video with sad lyrics. It’s three vibes all mixed together.”

Watch it down below.